Hello and welcome to Overdrive a program that broods over the world of cars and transport. I’m David Brown. The times each story appears in the program are noted (mm:ss) 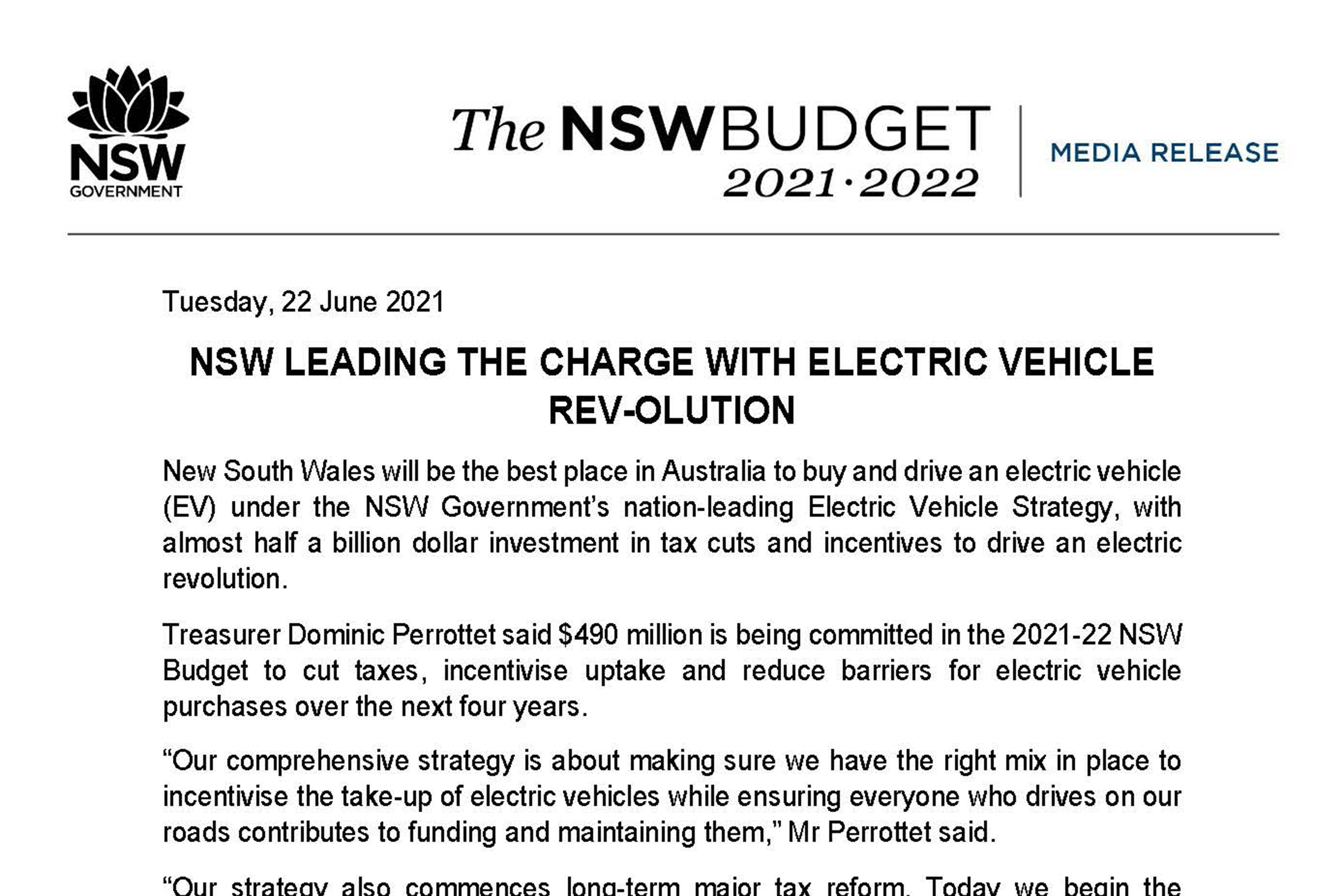 The NSW government’s latest budget contains some measures to encourage the take up of electric vehicles.

Stamp duty has been eliminated on electric vehicles up to $78,000 from September 2021 and then for all EVs including Plug In Hybrids from July 2027.

$151 million will be invested in EV charging infrastructure.

Electric vehicles will have access to transit T2 and T3 lanes and there will be some cash rebates for customers.

A road user charge of 2.5c/km for EV and a 2.0c/km for Plug-in Hybrid Electric Vehicles will be applied from July 2027 or when EVs make up at least 30 per cent of new car sales.

Genesis is expanding in models and sales

The Korean luxury car brand Genesis currently makes only small sales in Australia but its percentage growth this year is enormous. They currently have only 3 models on the market.

Guido Schenken their PR manager in Australia says there are more on the way.

We’ve just launched our updated V70 sedan in June and that’s going to follow shortly in July with our second SUV, GV 70, which we’re really excited about. I think we’ve already taken 100 pre-orders on that car before it was physically seen by any of the customers.

We have three EVs launching in the first half of 2022, all of which will be coming to Australia. So the first one will be a fully electric version of our jehadi sedan. And the next two I can’t talk about yet because they haven’t been globally announced. [00:06:24][16.8]

Can the station wagon make a comeback? – Peugeot Unveils the 308 SW

SUVs have overshadowed the market for station wagons in Australia.

Stations wagons have had a range of images from the stodgy family car to the sportwagon.

Their sales have plummeted to the surprise and disappointment of many car enthusiasts who want the practical room and the sedan like feel and handling.

Subaru led the way in creating cars that look and felt like a station wagon but also had all wheel drive.

Now Peugeot has announced with fanfare their 308 SW (for station wagon). But we won’t get it here in Australia till 2022.

Now total sales in this country have passed 50,000.

With a turbo charged all-wheel drive set-up and a highly successful rally pedigree, it became a prime example of a “hero car” that gave creditability to all of Subaru’s models and fed many young person’s dreams.

A new model is due soon.

Originally broadcast 26 June 2021 across Community Broadcasting Association of Australia (CBAA) and Torque Radio affiliated commercial radio channels and has a weekly audience of over 430,000.

Driven Media · Overdrive: Tax Break for electric cars; Station wagon comeback?; Installing your own speed humps
About David Brown 567 Articles
David’s boyhood passion for motor cars did not immediately lead to a professional role in the motor industry. A qualified Civil Engineer he specialised in traffic engineering and transport planning. What followed were various positions including being seconded to a government think-tank for the planning of transport firstly in Sydney and then for the whole of NSW. After working with the NRMA and as a consultant he moved to being an independent writer and commentator on the broader areas of transport and the more specific areas of the cars we drive. His half hour motoring program “Overdrive” has been described as an “informed, humorous and irreverent look at motoring and transport from Australia and overseas”. It is heard on 22 stations across Australia. He does weekly interviews with several ABC radio stations and is also heard on commercial radio in Sydney. David has written for metropolitan and regional newspapers and has presented regular segments on metropolitan and regional television stations. David is also a contributor for AnyAuto
Website

Hyundai has unveiled the new Genesis G90 large luxury sedan, the model that will top the new Genesis brand’s luxury car line-up. The G90 (called EQ900 in Korea) will compete at the top of the luxury car market with world-best technological innovations and the highest levels of refinement, convenience and dynamic performance. [Read More]