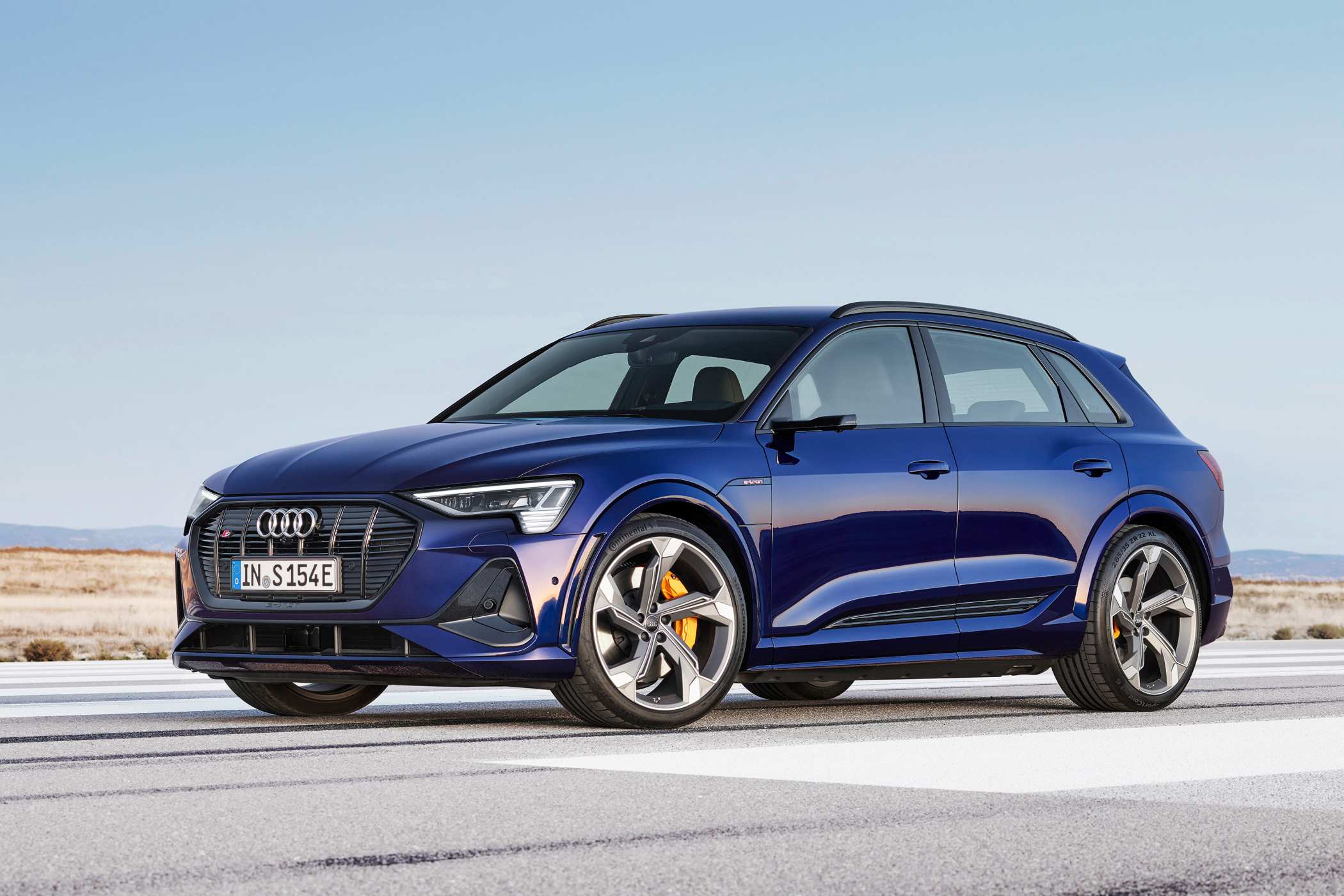 Their intelligent drive control raises vehicle safety, and dynamic handling in particular, to a new level. In addition to the electric all-wheel drive, the vehicles are equipped with electric torque vectoring with active and fully variable torque distribution on the rear axle.

The new Audi e-tron S and e-tron S Sportback are expected to arrive in Australia in the second-half of 2021. Further information on pricing and specification details will be announced closer to launch

The new Audi e-tron S and the new Audi e-tron S Sportback deliver dynamics in a new dimension. In S gear, they provide their full boost performance for eight seconds – 370 kW of power and 973 Nm of torque. The standard sprint takes just 4.5 seconds and acceleration ends at 210 km/h.

The front electric motor from the e-tron 55 operates together with a structurally identical counterpart and individual modifications in the rear. The high-voltage battery has a gross energy capacity of 95 kWh, of which 91 percent (86 kWh) is usable. With one battery charge, the Audi e-tron S and the Audi e-tron S Sportback achieve ranges of up to 360 km and 365 km respectively  in the WLTP cycle (preliminary values). 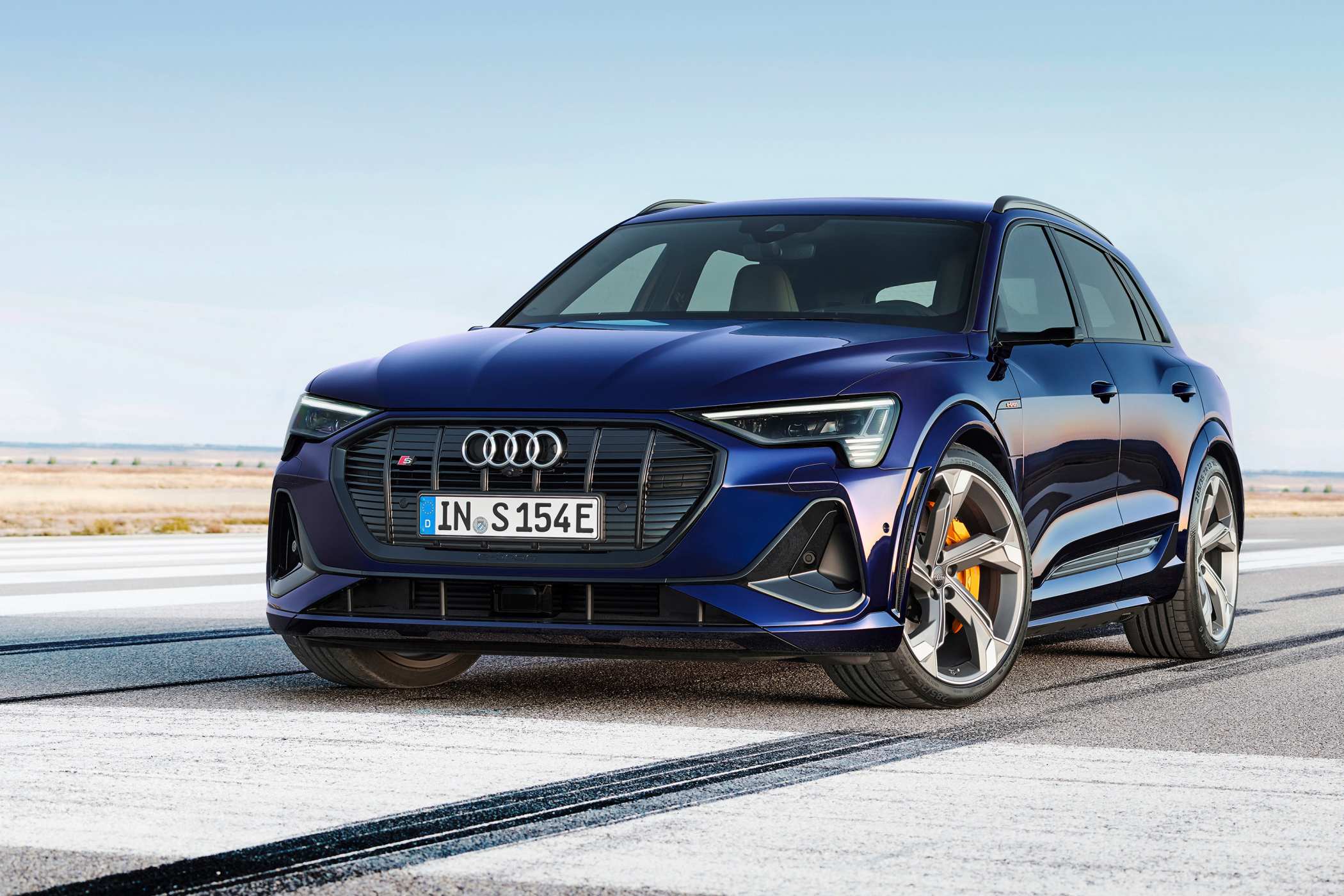 In order to improve efficiency, only the rear electric motors are engaged as long as the Audi e-tron S and the e-tron S Sportback are operating in normal driving mode. The front electric motor flashes into action when the driver demands more performance, or predictively before traction subsides.

Electric all-wheel drive is now enhanced with electric torque vectoring: Each of the rear electric motors sends the drive torques directly to the respective wheel via a single-speed transmission; there is no more mechanical differential. Need-based regulation takes just milliseconds and can manage very high drive torques.

Drivers experience the excellent agility and traction of the electric S models in particular when challenging them on curvy roads. Their character has a stronger emphasis on the rear end and is even sportier than that of the technical basis. If the ESC stabilisation control is set to “sport” and the Audi drive select dynamic handling system is set to maximum performance in “dynamic” mode, the drive layout facilitates a high level of transverse dynamics and, upon request, controlled drifts as well. When approaching the physical limit, the unloaded front wheel on the inside of the curve is decelerated slightly via the wheel brake to prevent slip and further refine handling. The sharp dynamism, high level of precision, and uncompromising safety are based on the close networking between all control units that manage the drive and suspension systems.

Networking: the suspension of the electric S models

The large high-voltage battery ensures a balanced distribution of the axle loads and is installed in a low position comparable to that of the three electric motors. This lowers the car’s centre of gravity, which offers great advantages in terms of handling. The progressive steering, whose ratio becomes increasingly direct as the steering movement increases, emphasises the sporty character. The suspension has S-specific tuning. The Audi drive select system offers seven driving profiles. For example, it accesses the adaptive air suspension sport – the air suspension with regulated damping can vary the level of the body by up to 76 millimetres depending on the driving situation and settings.

The electric S models are equipped with 20-inch wheels as standard and come with tyres measuring 285 millimetres wide. 21-inch wheels are available upon request and even sportier 22-inch wheels will follow at a later time. Fixed calipers with six pistons each are installed in the front above the large brake disks; sliding caliper are installed in the rear. The brake calipers are painted black as standard and feature the S logo. Upon request, they can be painted in a bright orange and decorated with the e-tron logo.

The brake is actuated and regulated via a compact module that controls the pressure build-up electronically (by wire), reinforces it electrically, and actuates the brakes hydraulically. An electric spindle drive actuates the displacing piston in a flash: The brake pads are in full-pressure contact with the disks after just 150 milliseconds. Depending on the driving situation, the brake control system decides individually for each axle whether the car will decelerate with the electric motors, the wheel brakes, or a combination of both systems. 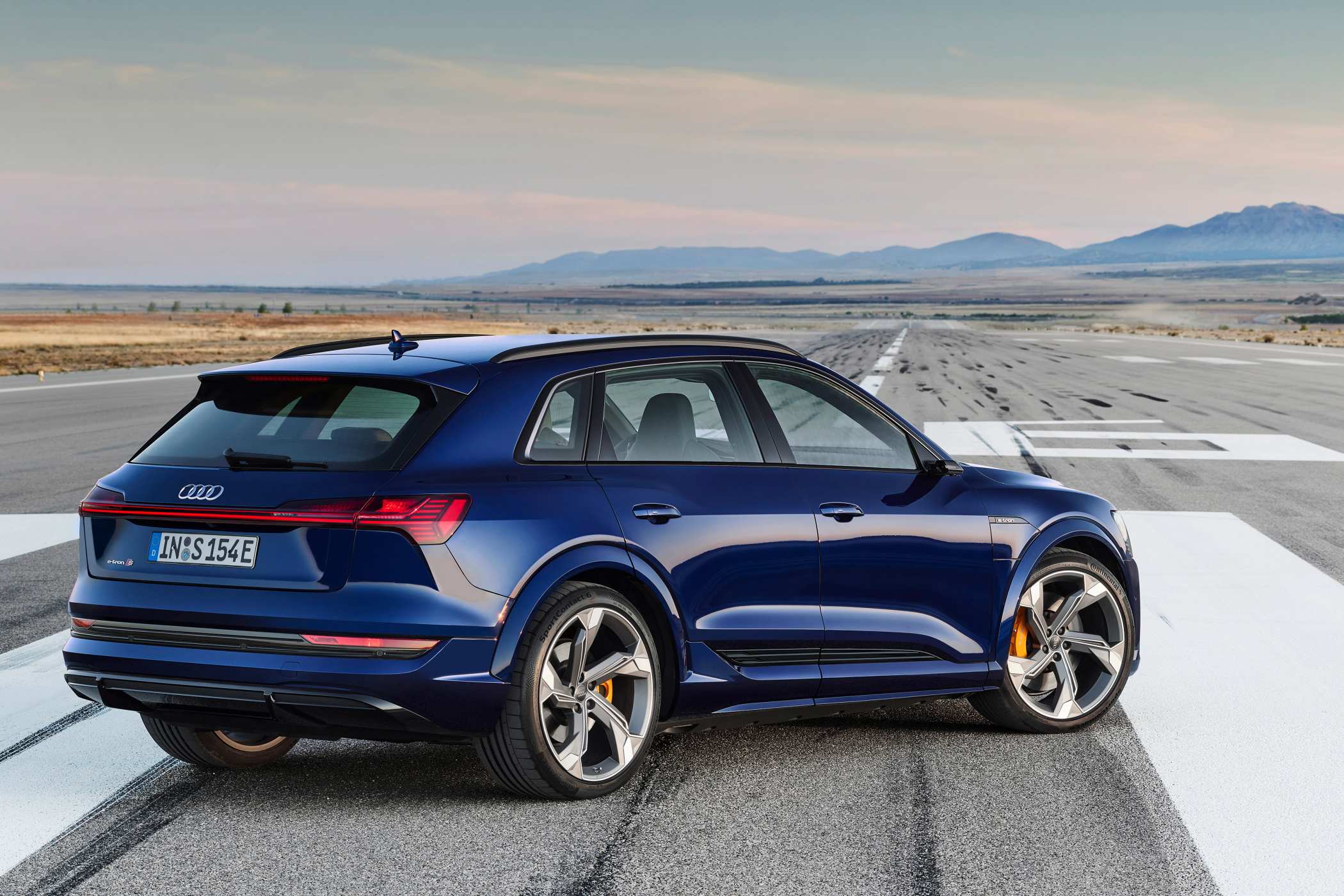 Thanks to the optional virtual exterior mirrors (cameras that send their pictures to high-contrast displays in the interior) in particular, the Audi e-tron S models achieve very good drag coefficients.

Flow-optimised wheel arch extensions also make a considerable contribution to resolving the conflict of objectives between outstanding aerodynamics and a sporty look. The innovative technology was developed by Audi and is now patented. The brand with the four rings is introducing it to large-scale vehicle construction for the first time. This allows the Audi e-tron S Sportback to achieve a drag coefficient of just 0.26, despite the widening of its wheel arches; in the Audi e-tron S, the drag coefficient is 0.28.

A second major element in the aerodynamics concept is the controllable cooling-air inlet with ducts to cool the front wheel brakes. It remains closed as often as possible so that the airstream flows over the hood with almost no turbulence. As part of efficient thermal management, each e-tron is equipped with a heat pump as standard. It draws heat energy from the waste heat of the drive components, thereby increasing the range by up to ten percent.

The sophisticated recuperation concept also contributes to the vehicle’s efficiency. Drivers can select between three recuperation levels, the highest of which allows them to experience a noticeable one-pedal feeling. When braking, the electric motors decelerate alone up to the area of 0.3 g, i.e. in most everyday situations. The hydraulic wheel brakes only come into play beyond that level. However, the electric motors remain active and can convert up to 270 kW of peak performance when braking from a speed of 100 km/h. 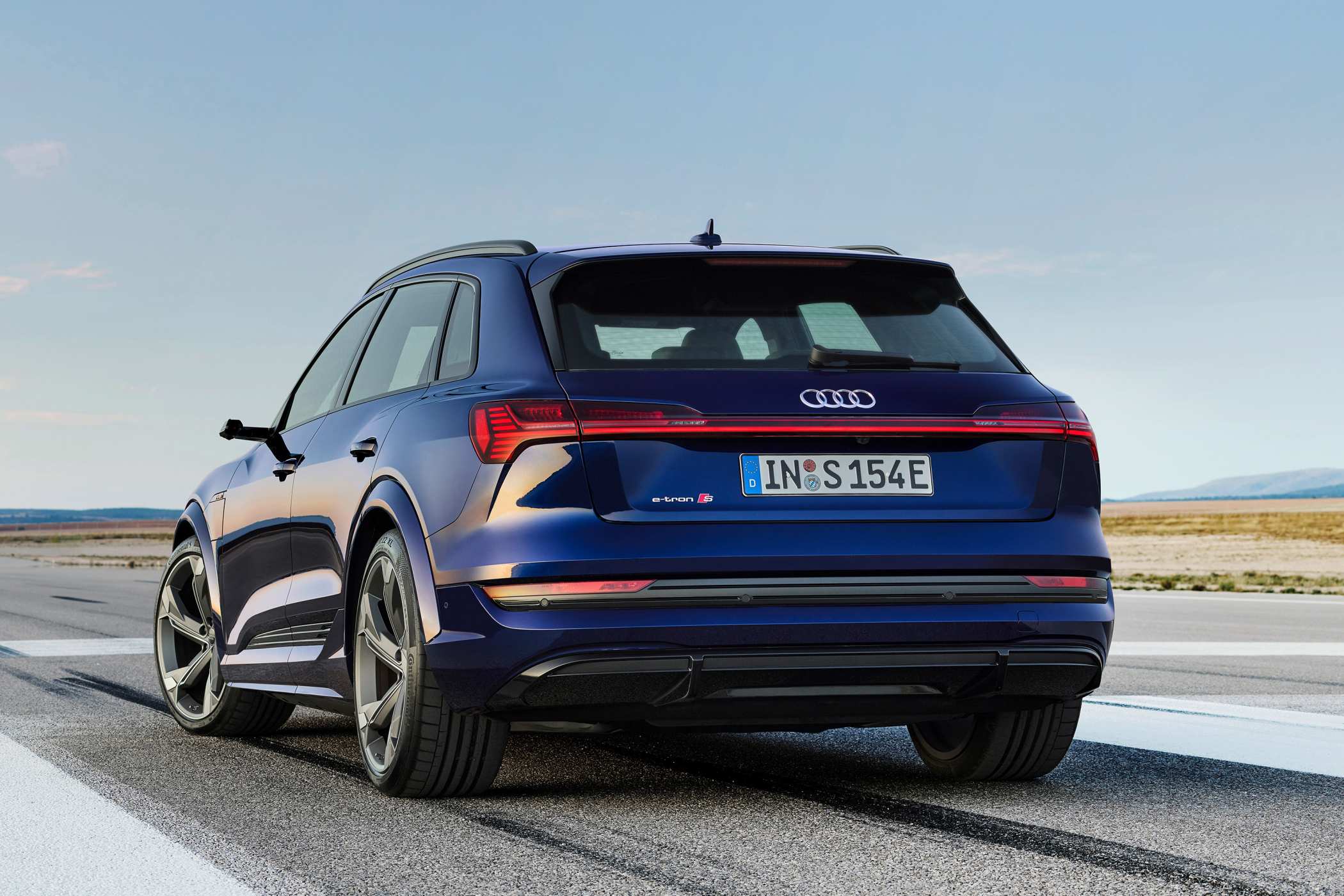 The Audi e-tron S and the Audi e-tron S Sportback reveal their electric power at first glance. Their front and rear bumpers have strong contours, and the air curtains are particularly large and expressive. The diffuser insert at the rear end extends almost across the entire vehicle width. The fact that the wheel arches on both sides are 23 millimetres wider makes the cars appear very powerful. Silver attachments at the front and rear end add highlights. This, as well as the aluminium exterior mirror housings are exclusive features of the S models Large parts of the body’s lower section can be painted in a contrasting colour upon request.

Both cars can be equipped with Matrix LED headlights as an option – another world first in mass production that Audi introduced with the e-tron Sportback in the fall of 2019. Each light is divided into 1.3 million pixels and can be controlled with great precision, which opens up many new functions. In narrow areas, for example, it shows the car’s position in the lane and thus helps the driver to remain safely in the centre.

The interiors of the Audi e-tron S and Audi e-tron S Sportback are designed in dark colours. Electrically adjustable sport seats come as standard. Their leather/Alcantara upholstery as well as the gear selector lever feature S embossing with a rhombus. The decorative trims are made of brushed aluminium and are available in two versions. They are also available in carbon upon request. The contour/ambient lighting package adds progressive highlights in the dark. 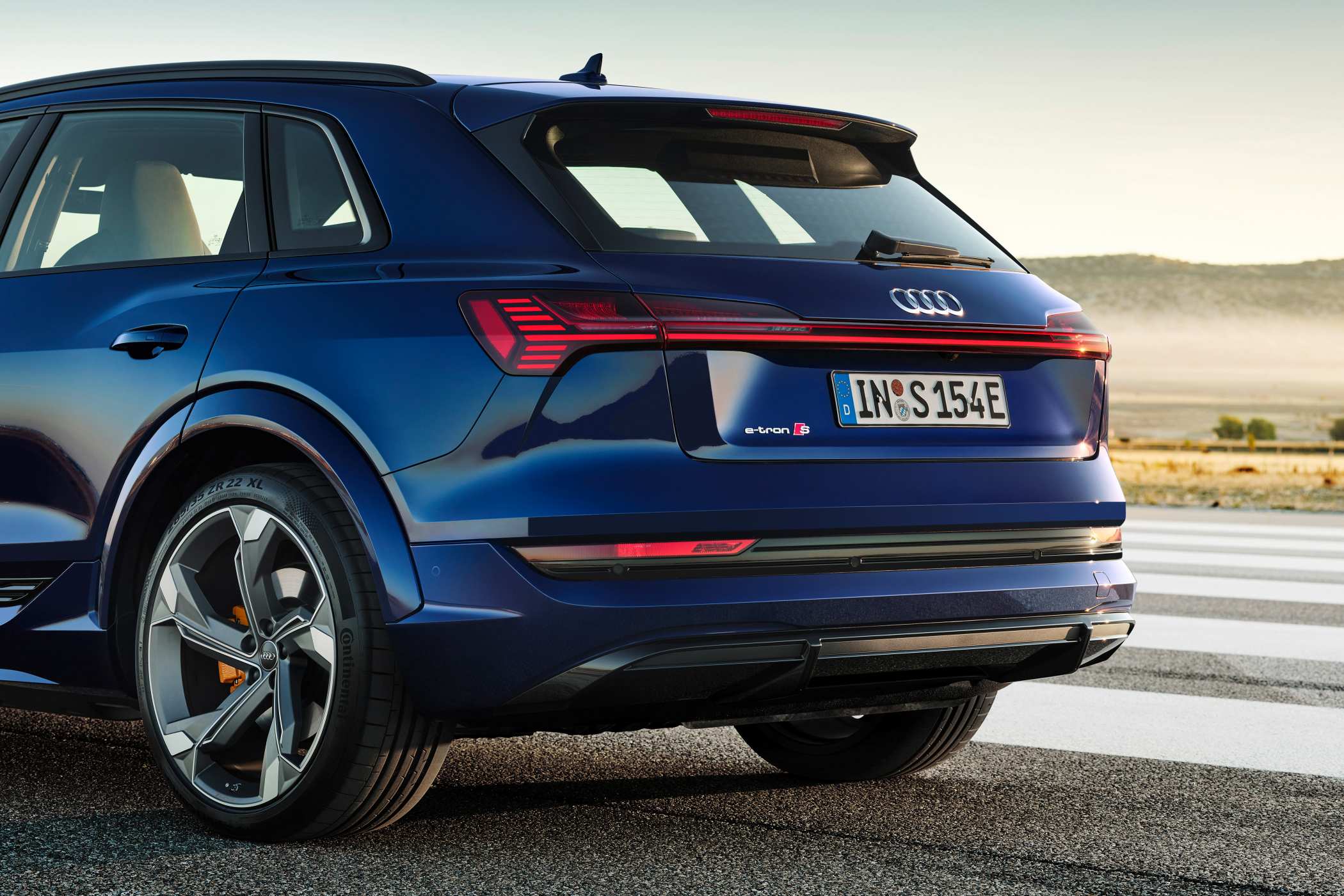 Like all premium range models from Audi, the Audi e-tron S and the Audi e-tron S Sportback are equipped with the digital MMI touch response control system with the two large central displays. On the third display, the Audi virtual cockpit, the driver can select a special e-tron screen that moves the electric drive to centre stage. An optional head-up display complements the displays. The MMI navigation plus control and infotainment system is included as standard. Behind its many functions is the third generation modular infotainment toolkit (MIB 3), which completes all tasks with a high processing power. It cooperates with the communication box, which connects the car with the environment and the passengers’ smartphones.

Audi connect’s online services complement the navigation system, especially the expanded e-tron route planner. It calculates the fastest route including optimum charging stops, taking into account traffic data, the driver’s driving profile, and the duration of the charging stops. In some cases, this strategy may result in the system suggesting an alternative route. The directory of charging points, which includes appropriate additional information, is updated online every day. Upon request, charging stations where the driver can pay using the e-tron Charging Service can be preferred when planning the route.

Electric, autonomous, composite, modular – these are the hallmarks of a unique Australian car proposed by the Society of Automotive Engineers [Read More]

It seems that quantity rather than quality also applies to charging systems for electric cars. [Read More]