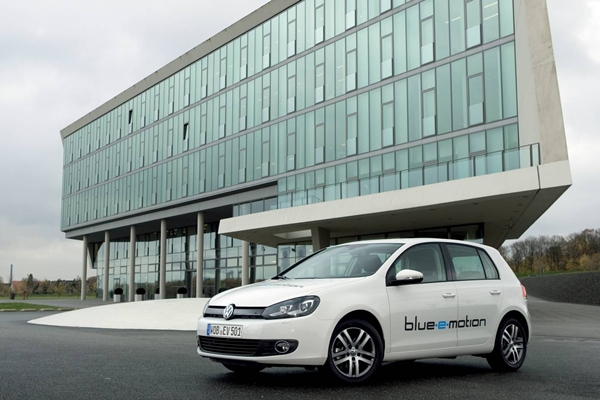 Volkswagen is set to produce the Golf Blue E Motion with Zero Emissions by the year 2014. Based on the most popular car the VW Golf it is to be driven by E-motor with maximum power of 85 kW.

With the Golf blue-e-motion the purely electrically powered version of the most successful European car ever built – Volkswagen is forging new ties to the era of electric mobility.

The five-door and five-seat version of the concept car is silently driven by an electric motor integrated in the front engine compartment with a maximum power of 85 kW and a continuous power output of 50 kW. Like all electric motors, the one in the Golf also delivers a very high maximum torque from a stop (270 Newton-metres).

The result: more fun in zero-emissions driving. The electricity for powering the electric motor is stored in a lithium-ion battery with an energy capacity of 26.5 kilowatt-hours.

Today, using a lithium-ion battery, driving ranges of up to 150 kilometres can be realised in the front-wheel drive Golf blue-e-motion; the specific range depends on driving style and other factors (such as use of the air conditioning and heating system).

At the car’s production launch, Volkswagen will announce final driving range data of the production version, which is expected to be significantly improved with the battery technology used then. In many locales, the needs of commuters are already met by a distance of 150 kilometres.

Take Germany for example: According to the German Federal Statistical Office, 6 of every 10 people in the workforce commute by car – on average 45.8 percent drive less than 10 kilometres (one-way commute), another 28.1 percent between 10 and 25 kilometres and 16.2 percent over 25 kilometres.

The Golf blue-e-motion can also handle the driving ranges typically covered by many service providers. In short-distance driving, the zero-emissions Golf represents a sustainable solution for private users as well.

More noticeably than on today’s modern petrol or diesel engines, the maximum range of an electric car is severely reduced when its maximum power is demanded frequently.

Therefore, the 135 km/h fast and very aerodynamic Golf blue-e-motion (Cd value: 0.295) provides ample power reserves to move the car swiftly while consuming less energy, and it can even coast or “sail” as it is called in the professional jargon. “Sailing” occurs whenever the driver – adopting an anticipatory style of driving releases the gas pedal, or rather the electric pedal.

The motor is then controlled to the zero-torque curve so that the car can coast with the least possible drag. In this mode of driving, the Golf blue-e-motion even recovers kinetically generated energy by battery regeneration.

The end result is that the zero-emissions Golf has enough performance potential to quickly execute manoeuvres such as passing. An index of the car’s very good dynamic qualities is its time for the sprint from 0 to 100 km/h: 11.8 seconds.

They can be found in the floor of the bootspace (fully usable cargo capacity: 275 litres), under the rear bench seat and in the centre tunnel of the underbody (between the front seats). A separate air cooling system ensures a constant thermal environment in the battery compartment. The battery modules weigh a total of 315 kilograms.

The driver can see how much energy is being demanded by the “electric pedal” at any given moment on the kW gauge (replaces the classic tachometre); drivers strive to keep the kW reading as low as possible practically intuitively.

A range indicator is also integrated in this round instrument. The speedometer, located on the right side as usual, integrates another small gauge that provides information on the battery charge state.

A new feature is the display of regeneration intensity in the multifunction display between the kW instrument and the speedometer. In battery regeneration, the driver has the option of pre-setting the braking energy recovery strategy over four stages (D to D3) via the automatic gearshift lever or gearshift paddles on the steering wheel.

In the lowest stage (D), the car “sails” as soon as the driver’s foot leaves the “electric pedal” – now the Golf blue-e-motion moves with very low drag; it is only “slowed” by the rolling resistance of the tyres and air resistance.

In the D3 stage, or B for braking, on the other hand, the maximum amount of kinetic energy is recovered and fed to the battery. In addition, the electrical energy consumption of the automatic climate control unit and its blower can be called up in the multifunction display.

In addition, an active driving profile can be set; this lets the driver select priorities in advance: between maximum range, maximum comfort and maximum dynamics. The selected profile then pre-configures the power of the electric motor, air conditioning control, maximum speed and battery regeneration strategy.

The Golf blue-e-motion offers the three profiles “Normal,” “Comfort+” and “Range+.” In the “Comfort+” profile, the full 85 kW of power is available; in this mode the Golf blue-e-motion can attain the specified top speed of 135 km/h. When the driver activates the “Normal” mode, power is reduced to 65 kW and top speed is lowered to 115 km/h. In the “Range+” mode the engine controller limits power to 50 kW; in this case, the car can reach a maximum speed of 105 km/h. At the same time, the air conditioning system is completely deactivated. The selected profile is shown in the multifunction display.

Full charging via the VW logo

The Golf blue-e-motion is charged via a plug connector behind the folding VW logo on the radiator grille. A pictogram of a plug connector in the multifunction display indicates that the charging cable is correctly inserted and locked.

During active charging an LED also flashes in the charge state indicator, and the charge level shown in the indicator is continually updated.

Packaging of the drive system

All key primary and secondary drive components were integrated in the front engine compartment. In arriving at this design, developers applied experience they had gained in numerous design studies.

As in the Up! blue-e-motion concept car, for example, an integral form of electric drive is used in the Golf blue-e-motion. Core components of the integral drive are the lightweight 80 kg electric motor together with a transmission and differential. Energy management is handled by a high-voltage pulse-controlled inverter that is integrated in the compact integral drive along with the 12 Volt electrical system’s DC/DC converter and charging module.

The entire unit is relatively light and compact; the five-door and five-seat Golf blue-e-motion weighs just 205 kg more than a comparable Golf BlueMotion TDI with DSG – despite the fact that electric car batteries are known to be heavy and weigh 1,545 kg in the concept car. Yet, the car’s safety properties are identical.

Mitsubishi may have found the holy grail of AWD SUV power plants with its all new PHEV Outlander. The PHEV Outlander may be the most sophisticated AWD SUV engine on the planet at the moment. [Read More]

Sumitomo Rubber Industries and Kansai University have developed a new technology to generate electric power from the rotation of a tyre. By installing an energy harvester inside a tyre, static electricity can be converted to clean energy. [Read More]