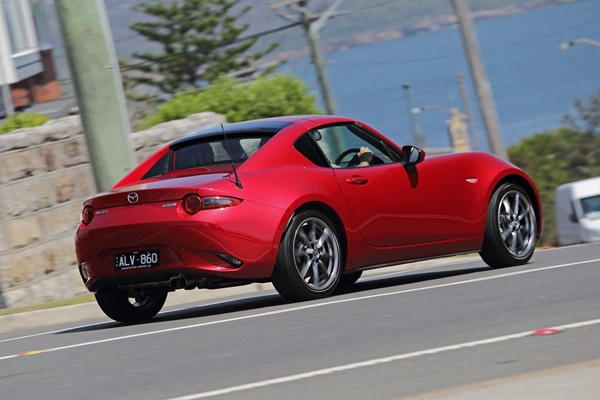 Mazda is not a manufacturer that is regularly associated with producing classic cars. They produce competent, well built cars for the general populace. However occasionally they produce something special. The rotary vehicles, well up to the last few, some earlier models and perhaps what will become the most lasting classic the MX5.

First released in 1989 the MX5 adhered to the principles of the light weight, well balanced simple sport car from an earlier era. It was reminiscent of the British sports cars of the 1950s & ’60s, such as the Triumph Spitfire, Austin-Healey 100, MG MGA, and particularly the Lotus Elan.

It became instantly popular. It wasn’t the fastest, or best handling, it certainly didn’t win stop light derbies, however when pushed on a twisty road there were few that could debate the dynamism and delight that it provided. It was the personification of a balanced sports car.

Fast forward through to 2017 and about a million cars later, Mazda has introduced the MX5 RF GT version. It could be described as the pinnacle of the development of the classic MX5.

Yes the engine is responsive, the Mazda is rear wheel drive as it should be, the steering is superbly weighted and provides direct feedback, the brakes more than effective, the transmission is slick and almost perfectly matched to the engine and the vehicle has a near 50/50 weight balance. These things we take for granted with a MX5!

The Mazda MX5 RF GT driving experience has been designed on the Japanese principle of Jinba Ittai – the Japanese philosophy of ‘horse and rider as one’.  Underneath it is full of the modern luxuries and safety features we have all come to expect from our cars. However the fundamental core of the MX5 RF GT is that it is a hell of a lot of FUN to drive.

The Mazda MX5 RF GT driving experience has been designed on the Japanese principle of Jinba Ittai – the Japanese philosophy of ‘horse and rider as one’.

About Alan Zurvas 101 Articles
Alan’s interest in cars began in his early teens and has been a member of several car clubs having owned a number of classic cars himself. He has a background in the corporate sector and has reviewed everything from restaurants to theatre and accommodation before settling on motoring. Alan is the founder of Gay Car Boys and is a contributor to AnyAuto
Website

Although displaying a distinct kinship with the BMW 3 Series, the new BMW 4 Series Coupé’s more muscular and purposeful design highlights its dynamic abilities. Exterior features have been designed to highlight the vehicle’s sporty pedigree, [Read More]