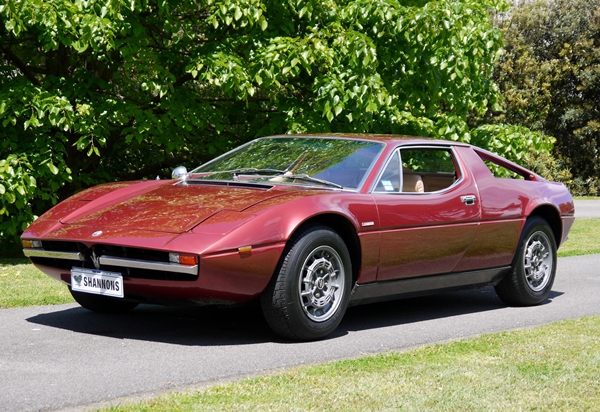 A beautiful metallic burgundy 1975 model Maserati Merak Coupe that featured in the video clip for the song ‘Silk Suit’ by Aria award-winning Australian alternative rock band Spiderbait, is going under the hammer at Shannons Melbourne Summer Auction on Monday, December 2.

While the original owner of the Australian-delivered 3.0-litre mid-engined Merak is believed to have been the Italian Consul in Adelaide, it re-acquired celebrity status recently when it was purchased in Melbourne by Spiderbait’s singer-drummer Mark Maher, better known to the trio’s fans as ‘Kram’.

Flush with funds from a recent hit, he went on to use the Maserati in Spiderbait’s video clip for the song ‘Silk Suits’ and in a photo shoot for Rolling Stone magazine.

Now the stylish and exotic Italian, with its contrasting cream leather upholstery and correct Campagnolo alloy wheels, is looking for a new custodian as Spiderbait reforms for another tour. 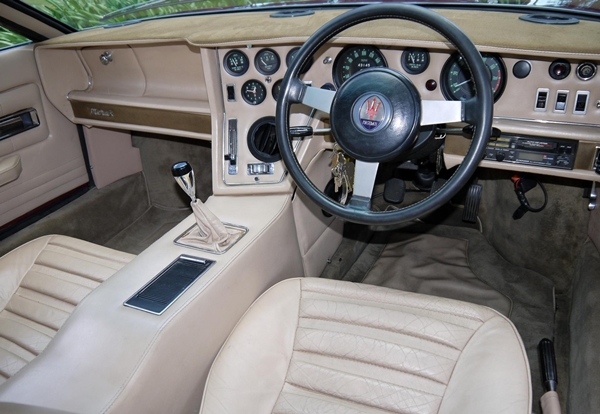 The Merak with its svelte Giorgetto Giugiaro’s Ital Design styling on the Bora platform, remains one of the most beautiful modern-day Maseratis, but unlike its Lamborghini Urraco and Dino 308 Italian rivals of the early 1970s era, it employed six-cylinder instead of V8 power.

As Citroen then owned Maserati, the Merak’s Giulio Alfieri-designed 2965cc quad cam V6 came from the Citroen SM coupe and aided by triple Weber 42 DCNF carburettors produced 141kW, driving the rear wheels through a ZF five-speed transaxle to give the Maserati a top speed of 240km/h.

Just 1,309 Meraks of the original model series were produced before the introduction of the SS in 1975 and only a handful of these early Meraks reached Australia.

Because of the model’s increasing rarity and the excellent condition of the ‘Spiderbait’ example, Shannons expect it to sell in the $45,000-$55,000 range.

The Merak is one of 39 classic vehicles and 30 items of automotive memorabilia – including 10 Victorian black and white three, four and five-digit number plates – in the auction.

About Anthony Hood 121 Articles
Anthony is an avid motor enthusiast. His interests lie in street rods, drag racing, 4WDriving and camping, burn out competitions, circuit racing and hill climbs. He is our resident hoon. Married with two children and a qualified diesel mechanic and fitter he brings a very laid back approach to reviewing vehicles.