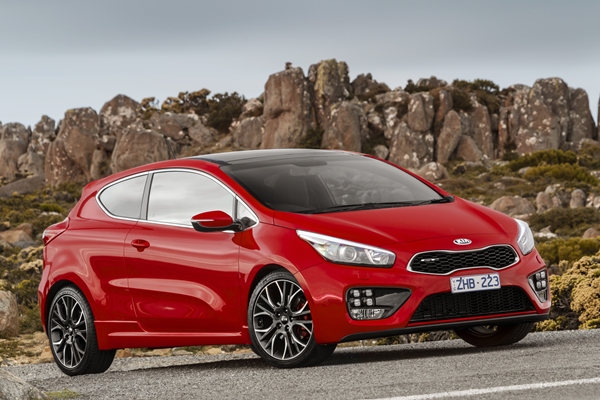 Kia has finally released the Pro_cee’d GT in Australia. The unusually badged cee’d GT is a sports coupe/hatch that is aimed at those that appreciate a sporty drive rather than a pure sports car. The Pro_cee’d GT has been eagerly anticipated and has created quite a buzz.

I had the opportunity to evaluate the Pro_cee’d GT on both a race way and on some stretches of the roads that are used for the Targa Tasmania over the last few days and my first impressions were very positive. There are two models in the range the cee’d GT for a MLP of $29,990 and cee’d GT Tech from $34,490 MLP. The Pro_cee’d GT is built alongside the rest of the cee’d range at the company’s European manufacturing facility at Žilina in Slovakia.

Externally the Pro_cee’d GT is ubiquitous like many other 2 door hatches yet at the same time it has striking styling from all angles. The unique front-end treatment introduces a lower, broader bumper and air dam and a wide central lower air intake to supply additional cooling air to the high-performance turbocharged engine. The front end also houses the unique cube LED daytime running lights that add a sense of the dramatic to the styling.

From the side and rear the Pro_cee’d GT looks low and sleek with the frontal overhang, dual shaded 18 inch alloys, Michelin Pilot Sport 3 225/40ZR18 92Y tyres, red calipers front and rear and dual exhaust pipes all assist in extenuating the sporty appearance. 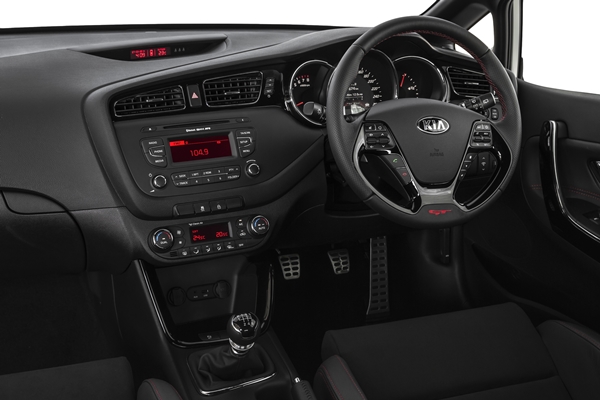 The sporty theme continues when you jump inside with leather and suede Recaro seats with red stitching and both Recaro and GT logos. The red contrast stitching on the seats extends to the steering wheel, gear shifter and door trims. Both front seats are comfortable, manually adjustable with electric lumbar support. 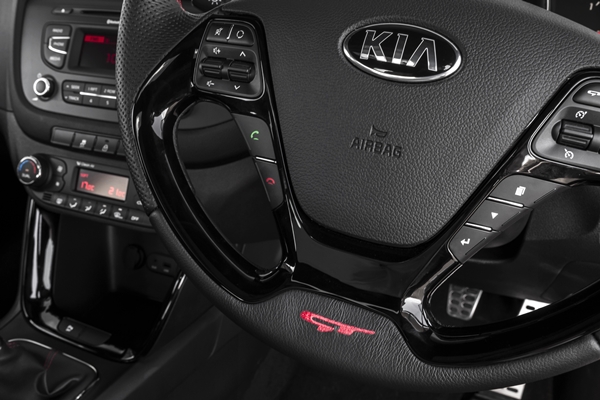 In front of the driver is a height and reach adjustable leather clad steering wheel with a multitude of controls inserted in the spokes. It feels great in the hands.

The instrument cluster consists of Kia’s familiar three-dial sporty instrument layout, enhanced by a TFT LCD multi-function high-definition display which allows the driver to switch between analogue or GT performance digital information. The latter shows the car’s speed, engine torque, turbo boost pressure and water temperature as well as important trip information. A button on the steering wheel allows the driver to change the display without taking a hand off the wheel. My prediction is that the dash will remain in GT performance mode. 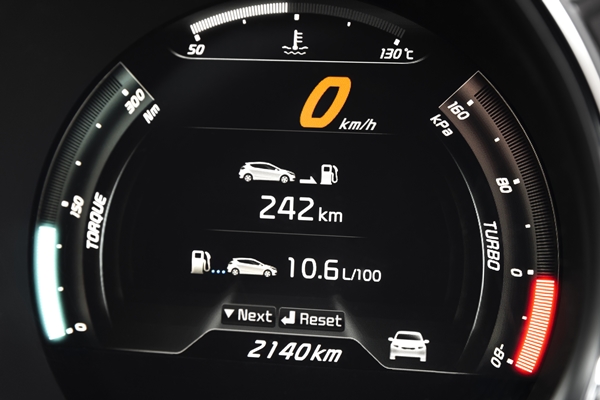 I actually learned a new marketing word on this launch – Haptics. . Haptics – how things feel and move – and ergonomics, the placement of controls and inter-relation between them, were of paramount importance and played a large part in the design. It has worked because when diving everything simply worked without thought. That is the essence of great design.

The centre stack and console layout is again typical Kia with plenty of storage areas and the added bonus of a chilled glove box. Unfortunately there is no Sat Nav option until Q3 2014 and buyers are left with a somewhat dated looking audio control display. Given the history of similar delays if an integrated Sat Nav display is important, you would be well advised to wait. However as I believe Kia will sell every car they can get their hands on I would put your order in now.

So the Pro_cee’d GT provides a very comfortable front seat interior for two people. To be absolutely honest I was having so much fun on the drive that I forgot to even look in the back seats, so I can’t even comment on room or comfort. There is however an abundance of boot space and the rear 60/40 split seats fold almost flat to extend the area to similar volumes to the popular Cerato hatch.

Standard safety feature include ESC), Vehicle Stability Management (VSM) to keep the car stable when accelerating or braking on roads with different levels of grip from left to right. Six airbags –¬ twin front, side and side curtains. The braking system features anti-lock brakes (ABS) with Electronic Brake-force Distribution (EBD), Brake Assist (BAS) and Hill-start Assist Control (HAC). The ABS and Electronic Stability Control (ESC) have been subtly retuned to complement the choice of tyres and the suspension revisions. 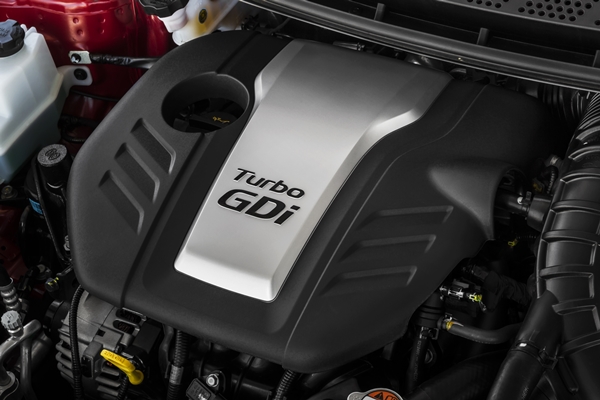 The heart of the new Pro_cee’d GT is a new turbocharged version of Kia’s 1.6-litre ‘Gamma’ engine. The T-GDi engine develops its 150kW at 6000rpm, but what really gives the GT its instantaneous response and rapid acceleration is the 265Nm of torque available without interruption from 1750rpm to 4500rpm. The Pro_cee’d GT accelerates from 80-120km/h in fifth gear in 7.3 seconds. More than 80 per cent of maximum torque is available from less than 1500rpm. The GT’s combined fuel consumption is 7.4 L/100km, while CO2 emissions are 171g/km.

The engine drives through a slick-shifting six-speed manual transmission featuring revised ratios and a lower final drive to allow the GT to make the most of its torque with minimal fuel consumption. The manual transmission is a gem, easy to use, well weighted shift and the gear knob fits in the hand again allowing use without thought.

On the drive we happily cruised along in 6th gear at 60 km/h without fuss with some acceleration available. This is a truly flexible petrol engine with none of the expected turbo lag thanks to the twin scroll technology and almost diesel like flexibility. On top of that flexibility and performance the exhaust has a clearly audible burble that sings for the sporty driver. 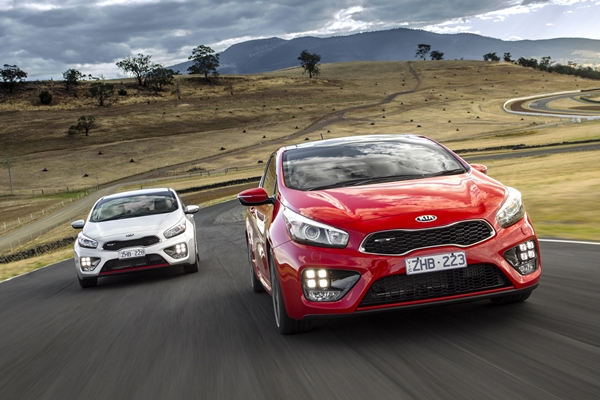 The front suspension is MacPherson struts with coil springs, telescopic shock absorbers and anti-roll bar. Rear suspension is Multi-link with trailing arm, telescopic shock absorbers and anti-roll bar. The Australian tuning of the handling dynamics also include hundreds of hours and thousands of kilometres resulting in refinement of the damper/springs calibrations and relationships as well a specific steering mapping for a result Kia Motors Australia believes is sportier yet more compliant.

So to the driving performance. Initial acceleration is smooth, with very little torque steer and with a 0-100Kmh of 7.7 seconds it won’t win many drag races. However outright performance is not the purpose of the Pro_cee’d GT. Find a tight twisty mountain road where the dynamic handling Australian tuned suspension and torque of the engine excel and you will find its purpose. 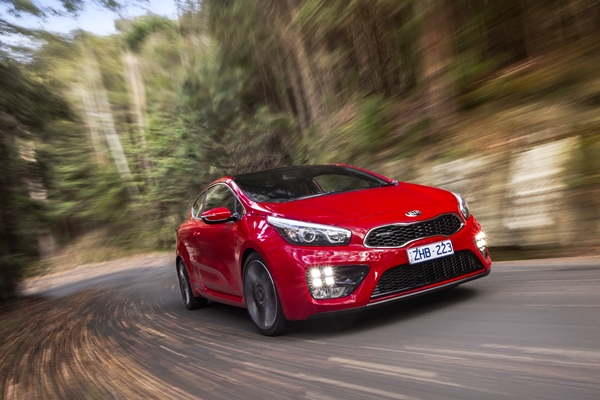 On the tight twisty Tasmanian roads where outright speed comes second to flexibility and handling the Pro_cee’d GT provides an engaging and fun driving experience. The steering is weighted just right allowing you feel the road. The road holding kept tight throughout rough corners and bumps although it did become a little skittish on gravel, again at speeds that wouldn’t normally be driven. 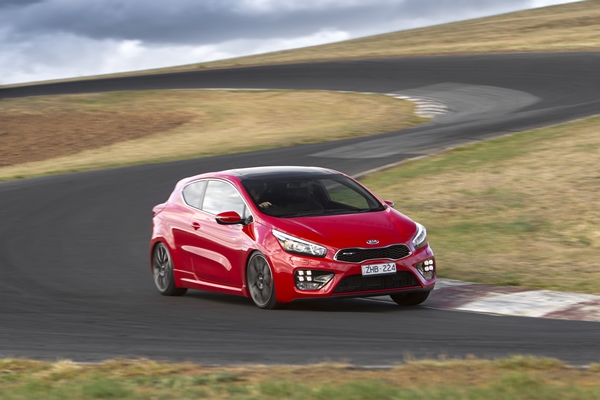 On the track quite exceptional roadholding was experienced for a standard road car. Under brakes all day there was absolutely no evidence of brake fade and we were constantly slowing from 165Kmh within 50 metres of the corner along the back straight of Baskerville raceway. The Pro_cee’d GT has 300mm x 28mm discs at the front and 262 x 10mm discs at the rear. The result is a confidence-inspiring braking performance with the ability to pull up to a full stop from 105km/h in less than 37 metres. 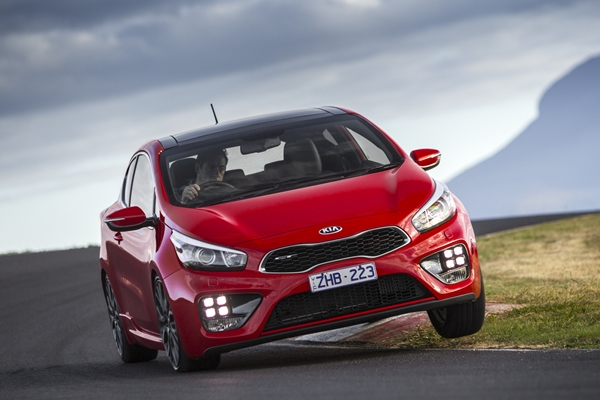 Believe me the cars were spared no leniency by the gathered journalists. Tyres also showed no sign of scrubbing nor chipping the edge. At speed into the corners there was a slight degree of understeer, but that was at limits way beyond what normal, even enthusiastic drivers would experience. For the most part the handling was neutral and stable under heavy braking into the corners. Steering response was positive and again neutral.

Kia believes that they will sell all they can get their hands on and I believe they will. 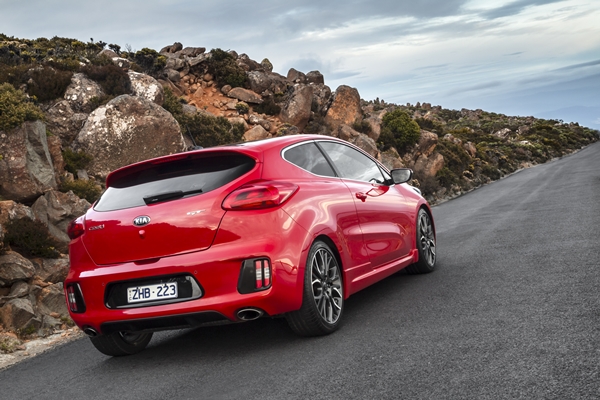 Ford Mustang GT – select Sport+, and the bucolic bliss is blasted out the back. The sound track turns from dulcet tones of Beethoven’s 6th, to Black Sabbeth stabbing Motörhead with shards of Anthrax. [Read More]

The competition for buyers in the premium compact SUV market is fierce with offerings from all major manufacturers. However the Audi Q2 has something about it that differentiates it from the others. It immediately makes you feel at home [Read More]