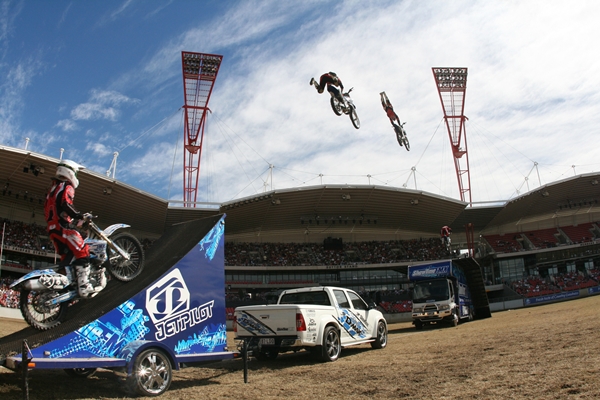 Formed in 1999, the team performed their first show at the Royal Canberra Show with just three mounds of dirt. Since then, they have cemented their position as the most spectacular main arena act in the country – and with an average of 250 performances a year – they are the most experienced Freestyle Moto X team in Australia.

“The ShowTime FMX boys pull a crowd wherever they go, and more importantly their performances are geared towards a younger demographic which is a segment of the market we are in hot pursuit of,” said Dave Harding – IUA’s Senior Public Relations Manager.

“This partnership – like several others we will roll out this year – will help expose the D-MAX brand to a new generation and our aim is to pick up a few fans of our own along the way,” he added.

The deal with Isuzu UTE Australia sees the team kitted out with a variety of customised D-MAX models to help them cart their bikes, ramps and mechanics across the nation – in style.

“We are very excited to be continuing our relationship with Isuzu D-MAX,” said Gary Reid, Director of ShowTime FMX.

“Over the last two years we have travelled over 180,000km in our team D-MAXs and they have been great … they look great, go great and handle the tough times our team gives them … they suit all our needs including towing our new wakeboard boat and enclosed car trailer,” Reid added.

To kick the year off the team headed to Mulwala on the Murray River (NSW/VIC border) for their Summer Carnival. It was the 10th year that the team had performed at this event with FMX showbags selling out after the second performance and over 1500 team posters signed!

So make sure you keep an eye in the sky (and now on the road!) for the Showtime FMX boys who will no doubt be coming to a town near you soon.

Isuzu updates the D-MAX range for 2022

Isuzu’s updated 2022 Isuzu D-MAX 1-tonne Ute range has officially arrived, welcoming a host of updates and refinements based on feedback over the past year. [Read More]

Is the Isuzu D-MAX X-TERRAIN the best 4WD Ute on the market, Stick Around for a minute and find out. [Read More]

The Isuzu D-MAX has again delivered on its promise of real-world durability and dependability by taking four of the top ten places in one of the world’s toughest off road rallies – The 2013 Australasian Safari in Western Australia. [Read More]