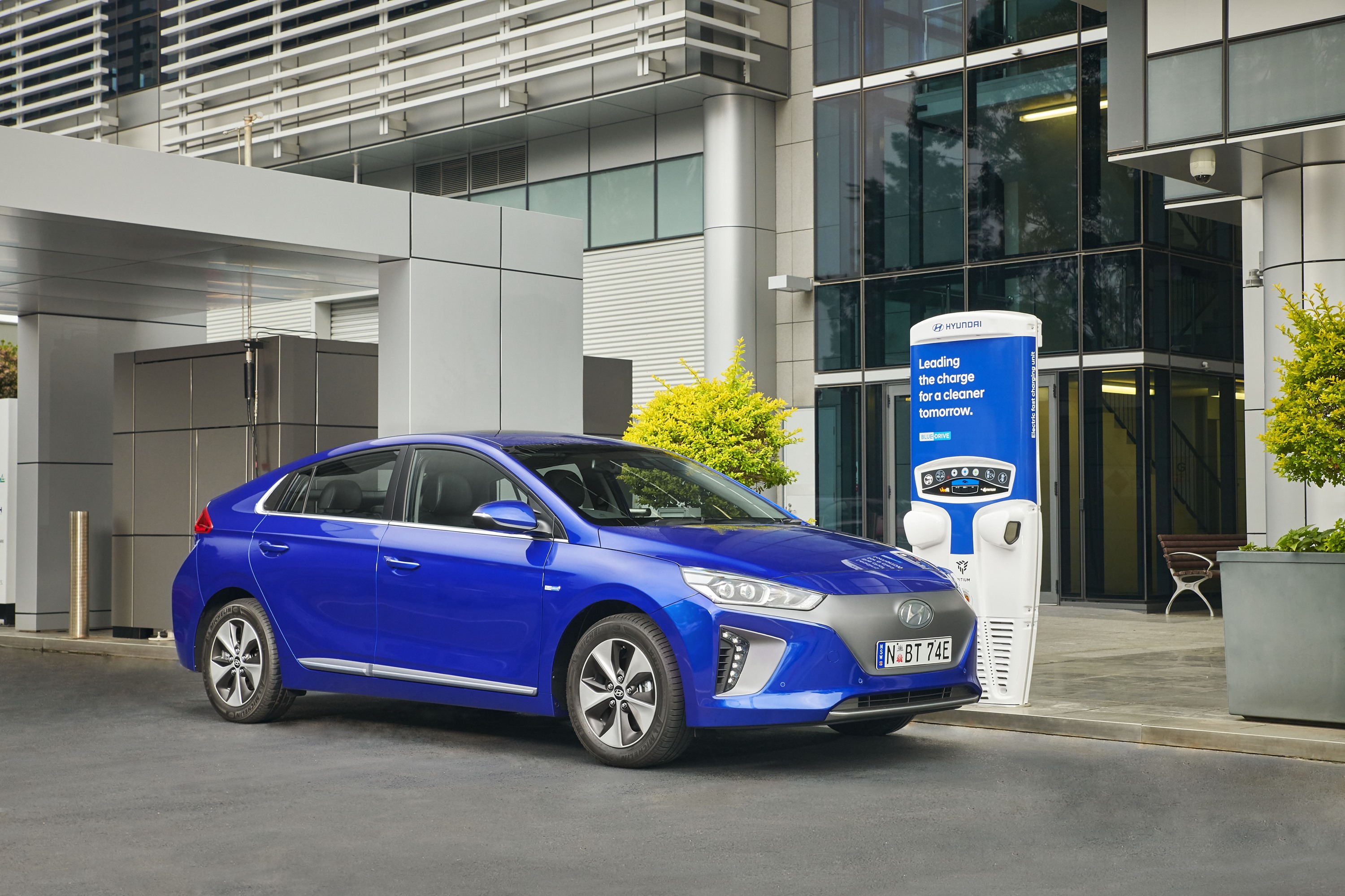 Hyundai Ioniq – Within 20 years, if you want to see an internal combustion engine, you’ll probably need to visit a museum, just as they did in the song Big Yellow Taxi/.

In the interim, cars driven by big washing machine motors will become commonplace.

Poor old Australia is ages behind the rest of the rest of the developed world when it comes to the uptake of electric cars. Why? Our antiquated government continues to subsidise fuels made of old bits of dinosaur. In countries where forward-thinking governments are not quite so beholden big bakers, funding for EVs has made has made their air just that little bit cleaner and greener..

Last year the car sales were down. After the government killed off local car manufacturing, Australia became an importer, as it is of most other things. Just 1,153,111 vehicles were sold. Of those, only 906 were electric. A further 14,346 were hybrids. Those figures do not include the uber-secretive Teslas.

It’s the chicken or the egg Situation. EV sales are puny, and it has resulted in Australia having a rubbish charging infrastructure. That, combined with range anxiety, means most electric vehicles are consigned to ferrying friends no further than the local shops

Clever old Hyundai knows this, so they’ve been they’ve shoved a petrol engine in some of the Ioniqs for those not ready to make the Pure EV jump. That means, Ioniq can be used anywhere as long as the buyer shops carefully.

Our range-topping Premium Ioniq EV comes in at $48,990 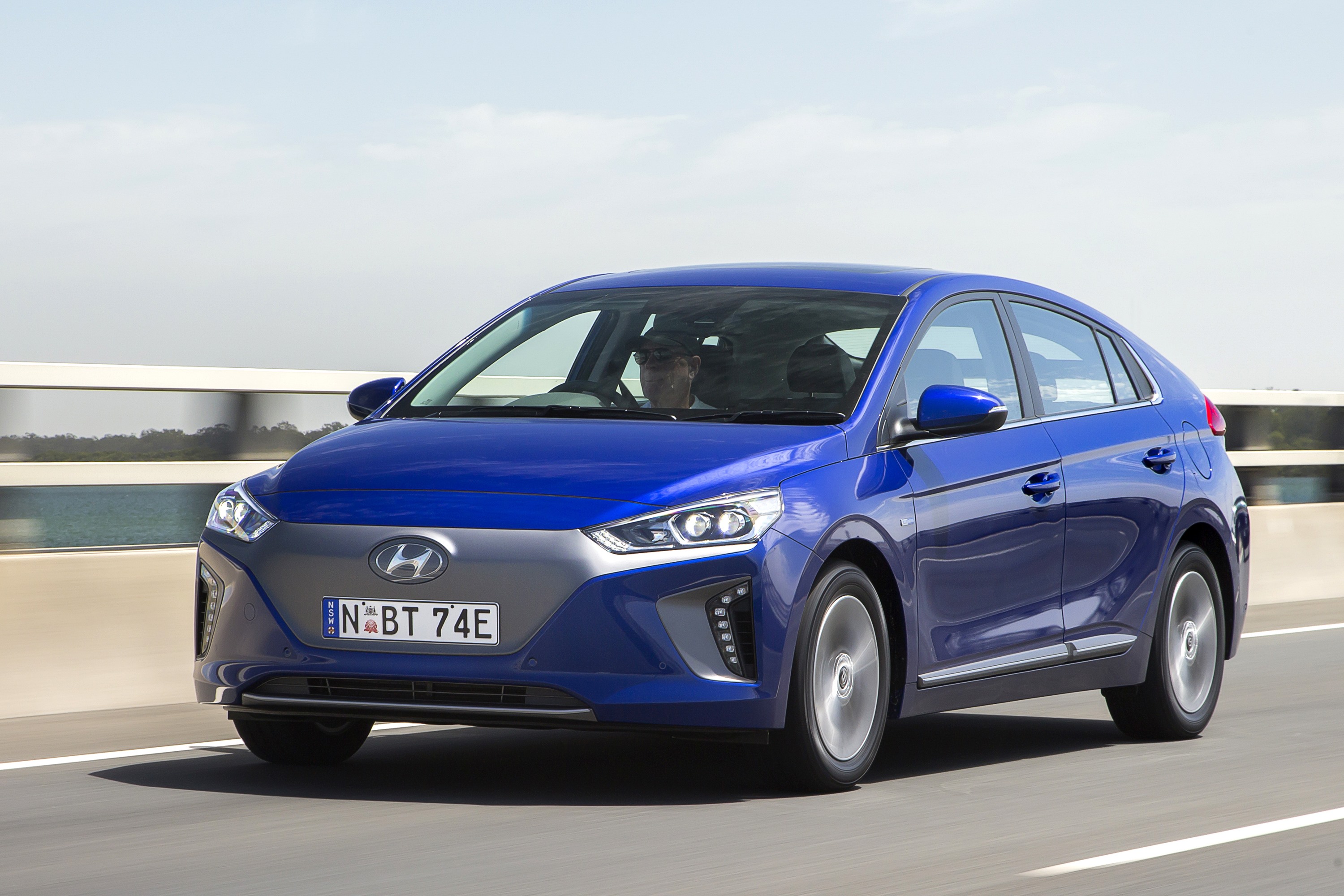 For that you get an electric car that has an alleged range of 230km. It will charge to 80% on a fast charger in just 23 minutes. Sadly, there are very few fast chargers. But more about that later.

There is an app that monitors the car no matter where you are in the world, and will show you where charging points are located.

You can also monitor battery status from inside on the 8” infotainment screen, or the7” LCD screen in front of the driver.

Fastback shapes may not be everyone’s cup of tea but they aid aerodynamics. Only the hybrid gets a full-size spare. The plug-in and pure EV models make do with puncture repair kits. They are the Devil’s work. In the bin with them.

Secreted deep within is a 28kWh Li-ion Polymer battery good for 230km. The 88kw electric motor has a mountainous 295Nm of torque that comes on-line the second you plant your loafer.

The front wheel drive hatch sits squarely in the “small” segment, but the cabin feels much more capacious than it has any right to be. 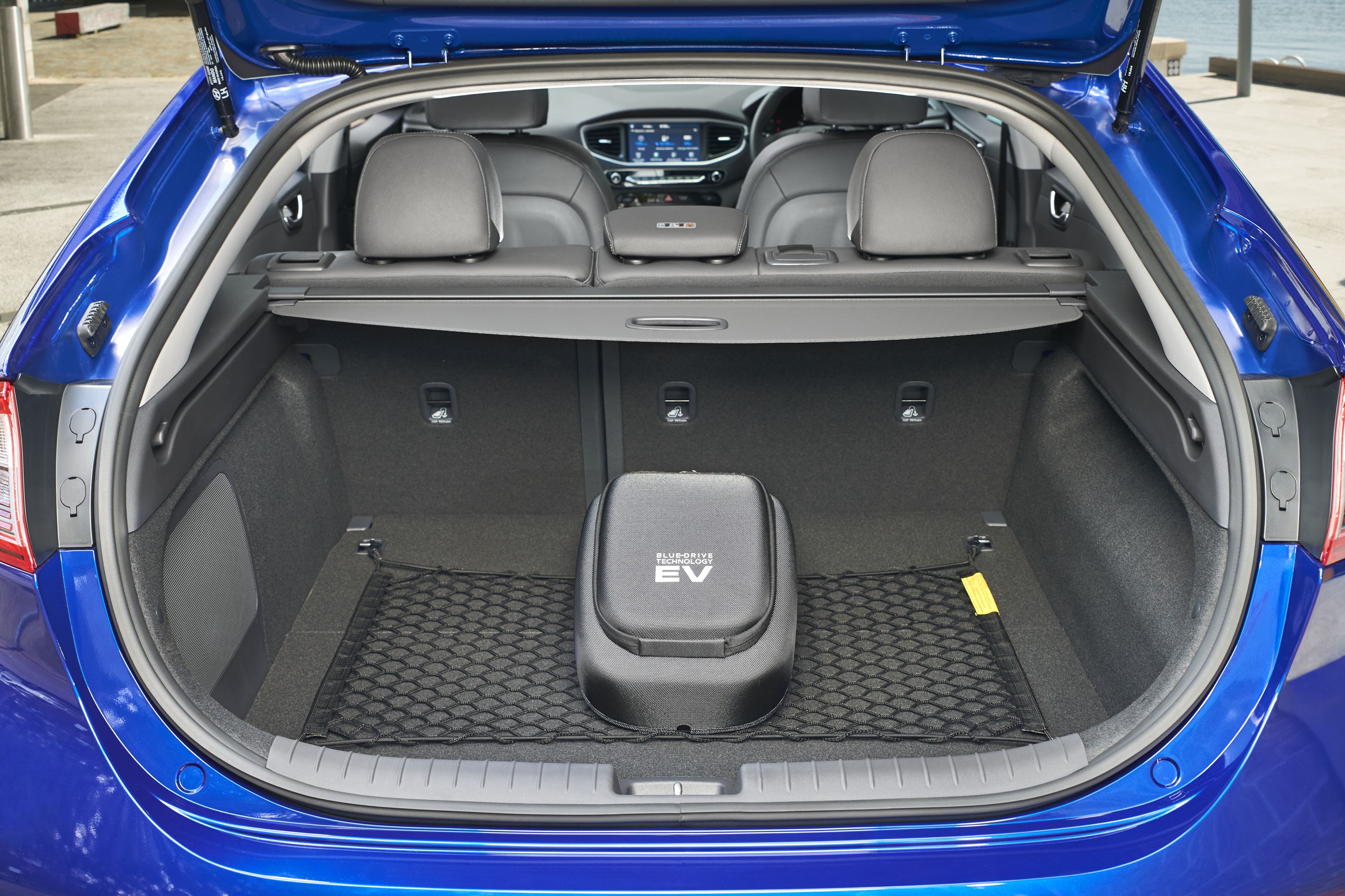 The 355L boot increases to 455L if you stack your Bunnings-Best-Buys to the roof.

Seats are comfortable, and are heated and cooled. Remember, those modern luxuries drain your glass quicker than a Queen-Mum’s cocktail.

Apple CarPlay/Android Auto can be streamed from your wired connection, and a Qi wireless charger is also standard. That too, ruins your range.

All Ioniqs come with Hyundai Safety Sense which includes blind spot monitoring, rear cross traffic alert, and active lane assist. That is all topped off with radar guided cruise control.

Controls are standard as per other Hyundais, except for the steering wheel paddles. Instead of gears,  they change the regenerative braking levels. Nifty.

There are drive modes too. Shifting in to Sport gives the humble hatch a quick dose of chilli. In wet weather, front wheels scramble for grip as the tricky torque tries to toss you into the Tibouchinas.

Directional changes are made with buttons on the centre console, and are located just in front of the parking brake switch.

You might expect an electric car to be bewildering, but it isn’t. At least, until you enter the dystopic world of recharging.

Whatever range your car says it has, it doesn’t. Even though the LED lighting saves power, it isn’t enough to prevent you from chomping down on those batteries like a bogan at a BBQ.

Range anxiety sets in the moment you leave the garage. You watch the range figures like you’re expecting them to boil. It’s like permanently having the “Low Fuekl” warning light on. 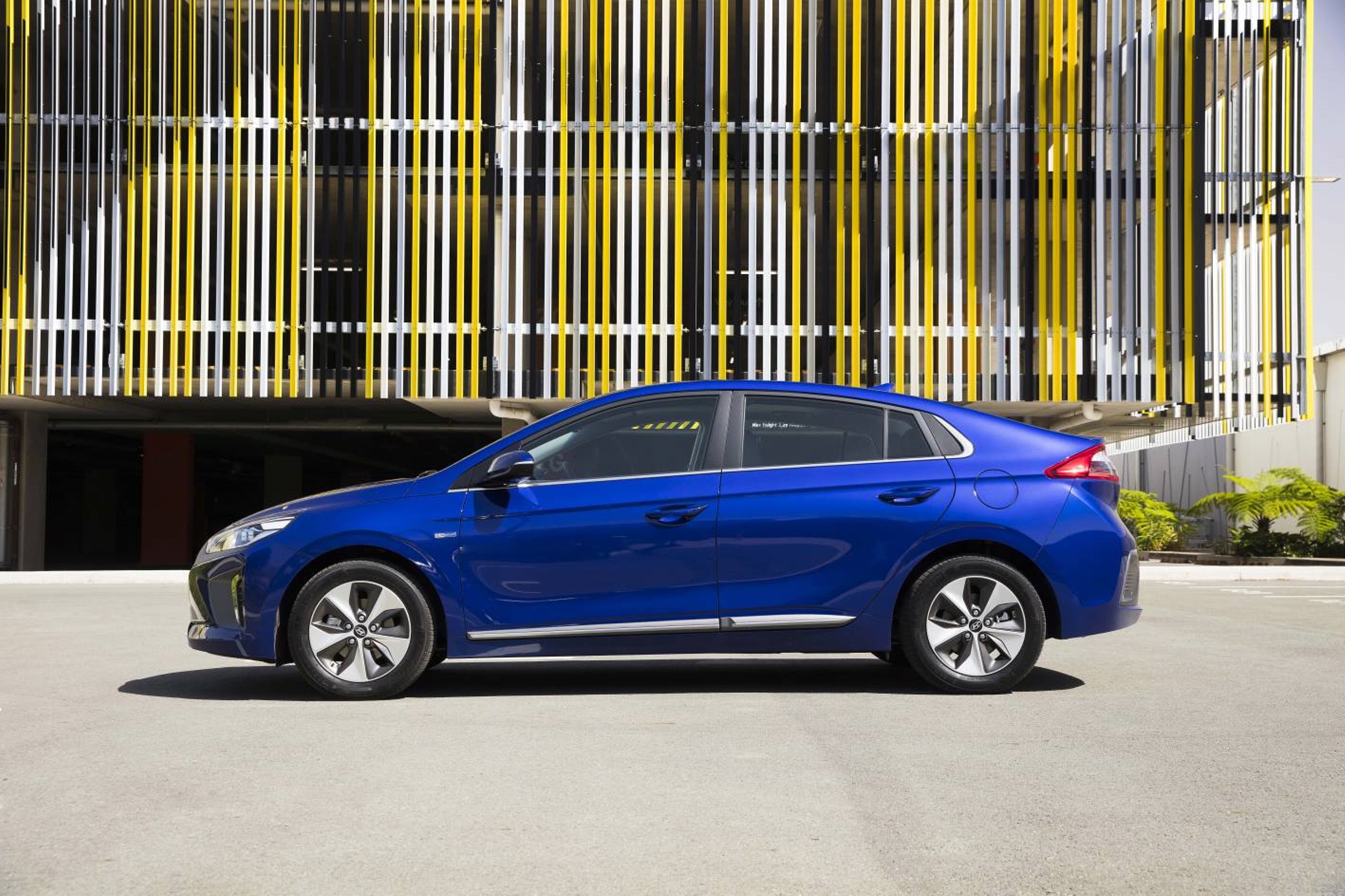 But, all is not lost. If you’re clever, you can charge for free.

I put the Plug Share charging app on my phone. It directed me to my local shops. Hidden away in the bowels of the car park is discrete a row of cables hanging limply from the wall.

I looked for the one that matched my charging port and plugged it in.

After pressing the green button and the dashboards proudly displayed 1hr55mins to full charge. Drat it all, it wasn’t a fast charger. There is no way to tell because all of the units look the same.

I stared soporifically at the dash for a moment, then accepted my lot. I went upstairs buy the bits for my taco dinner. I had a coffee and a light lunch. I returned to find that after one and a half hours, my range had gone from way below half, to almost full. At no time was I asked for my credit card and you get 2 hours of parking free.

I was struck by the fact that the row of EVs looked like the Earp’s tethered steeds at the OK Corral.

Once back out on the road, I found myself smirking with that smug sense self-importance that all EV drivers have. Remember, all of that charge can be offset against green credits.

The body is tight and is held together with lashings of adhesive. Don’t despair, adhesive is far stronger than conventional welds.

The ride is good most of the time. Steering is light but lacks feeling. The lack of noise especially at low speeds, is nothing short of eerie.

After a week, and several charges, I grew to quite like the Ioniq. Its looks are not quite my cup of tea but the drive was excellent.

The Achilles heel is the ease, or lack thereof, of finding a charger. They are nowhere near ubiquitous enough to be convenient. Most of us who live in strata buildings won’t have access to a plug at home and that really gives me the irrits.

Batteries have an 8 year/160,000k warranty in Australia, but our lucky American friends have a lifetime warranty to the original owner. That gives me much hope.

Warranty other than battery is 5 year with 12 months roadside assist. If you service your car with Hyundai, you get roadside assist and free map updates for up to 10 years. The 1,500km service is free, and $160 thereafter.

With most EVs, when I’ve asked about the retails cost of battery replacement, the answer usually runs to roughly half of the value of the car.

Normally, the most expensive bits to maintain are the oily bits, and Ionic doesn’t have any of those.

It is one of the cheapest EVs around and the hybrid versions are even cheaper. That’s not to say it is cheap, just cheap for an EV.

Hyundai IIONIQ – It is one of the cheapest EVs around and the hybrid versions are even cheaper. That’s not to say it is cheap, just cheap for an EV. With most EVs, when I’ve asked about the retails cost of battery replacement, the answer usually runs to roughly half of the value of the car.