BMW 750Li is a luxurious limousine that provides the buyer no expense spared features. At first sight, the biggest BMW looks imposing. The craftsmanship exudes an almost hand built quality, and a raft of inclusions make anyone feel like royalty.

The cutting edge headlight has a complex “active high beam head light” system that switches so that only the oncoming car remains unlit. Both sides of the road remain well illuminated.

The cabin is big enough to host the annual Summer Hunt Ball with room to spare.

Everything is electric, including are all four seats, which are also heated and cooled. The 4 zone climate control can be synced to the driver’s temperature dial. The rear left hand passenger gets a large footrest which appears magically from the back of the (unoccupied) front seat-back. There are optional tray tables, which should be a standard fitting surely.

The back seat passengers can be quickly shielded from prying eyes by electric sun shades and rear door windows, and on the rear windscreen.

The butter-soft Nappa leather seats can be adjusted by buttons on the rear console, or the removable Samsung tablet. The tablet can control the media system including TV which can be heard through top-notch headphones.
Both rear seat monitors can view different media be it TV, movies, or a mirror of the front LCD. If the tablet is being used by one passenger, the other can use a conventional remote stowed inside the console. 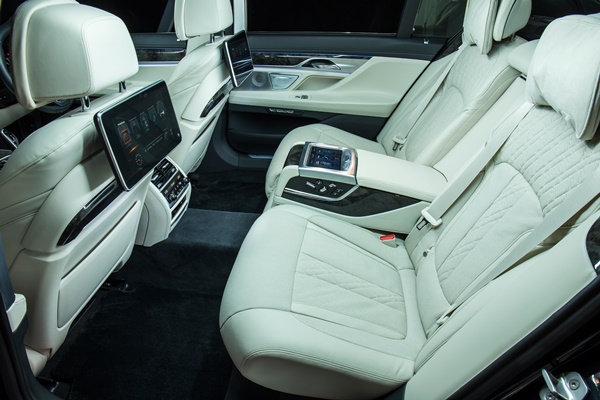 I’m 6’ and can stretch out fully on the passenger’s side making the rear compartment the place for even the fussiest passenger. There is even an optional (removable) fridge in the boot for road trip essentials, and can be accessed through the rear pull-up leather-covered hatch.

Everything is clad in the same luxurious Nappa leather. In our case, the cabin was finished in deep cream carpet with elegant white diamond-crossed leather. This is not an interior for the sloshed.

The driver is also spoiled. All but the most useless of drivers will be thrilled by a 4.7 second 0 to 100kph sprint. Burying your stelly into the Axminster brings out the jaunty-capped chav in all of us. Although the power is brutish, it never ever slaps upside the head.

The ride control system has a Sport setting that can be configured by fiddling in the iDrive menu. It changes the throttle, suspension, and steering. Even in this mode, the steering is uber light making the 1,950kg saloon feel more bijou.

The cutting edge 5.0L V8 has twin turbos. Twin turbos does not mean two units, but rather two turbos in a single unit. This eliminates the old turbo-lag by putting a small and large set of vanes on a single axle. The smaller turbo spools up faster, taking the larger set of vanes with it. What genius. 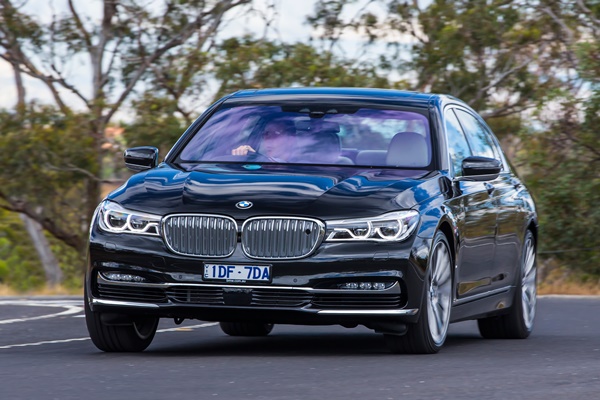 Electric steering means no hydraulic pump running a belt off the engine. The electric system needs power when the steering wheel is turned. Regenerative braking charges the battery, so the alternator is less stressed. That means no belts running, and more power while using less fuel.

The engine disengages from the transmission during coasting, and along with the braking and air flow technology, reduces fuel usage even further.

The ride is delicious. The BMW wafts along in luxurious slender, and on the highway, is a true GT car. There is an endless reserve of power, only slightly outdone by the cocoon of the leather, metal and wood inside.
The audio system has high-end reproduction. The speaker grilles have drilled aluminium covers. They have the look of an exclusive Danish audio showroom mixed with a touch of Bauhaus, and mid-century-modern. 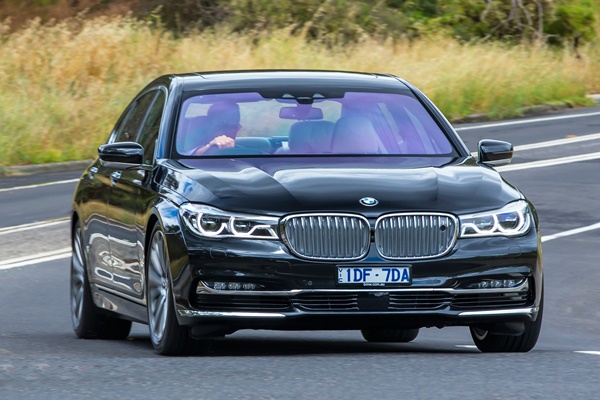 The high-tech bonanza continues with the driver assist systems. There is active lane control which centres the car in the lane by applying torque to the steering wheel. It can be switched on or off as needed.

The regular blind spot monitoring also warns if traffic is approaching at speed, and the rear camera warns you if traffic is coming while you’re backing out at a busy Bunnings.

There is a Night Vision Camera to help in low light conditions, but I did little more than test it and see little point to it. The switch was hidden to the right of the steering column, low on the dash board out of sight. It would have been easier to put it with the rest of the camera functions.

SatNav has 3 input methods: iDrive dial, Drive track pad, and voice. There is automatic rerouting for traffic congestion, but I left it set to “always ask” mode. I dislike SatNav bossing me around mid-journey. You often miss the messages and think she is trying to toy with your emotions.

There is Voice and gesture control which you can use or ignore at your pleasure. The voice control can be terribly a bit moody.

It can be used to deal with phone calls, and volume control. The gestures are: 1 finger in a circle (sound up or down), one finger poked at the screen (answers phone), two fingers swiped y to one side (rejects the caller), and two fingers pointed, will do whatever the driver has assigned to it.

Our car advanced radio stations, and often did it when I didn’t want it to, as if the voice control wasn’t maddening enough on its own. The direct-select buttons can be assigned radio station, as well as functions such SatNav destination input.

The optional “ambient scent” is button operated and selects a choice of 2 discrete aromas It takes up a lot of room in the smallish glove box. The smell can be annoying and can be turned off completely..
The front seats have a many button operated adjustments. The headrests, seat back, bolsters and lumbar support adjust individually. In addition, there is thigh support and the seat bottom tilt, and all four seats have a massage function. Luckily there is also a Driver Alert in case you nod off.. 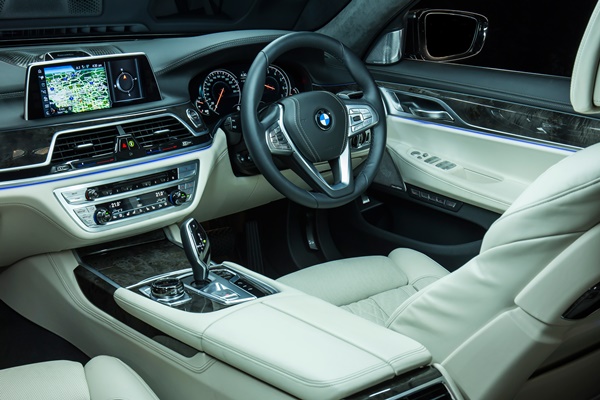 The instruments are similar to other BMW’s. The centre stack is clearly zoned with a free-floating tablet at the top, the vents, then radio direct selects, and climate controls. There is DAB radio and Apple CarPlay as options. The vent system is designed to change the air in the cabin without the occupants ever feeling a direct breeze.

Active cruise control applies braking to keep safely behind the car in front. It will slow down to a stop if needed. When the traffic moves off in under 3 seconds, you do too. Otherwise, it brakes until you blip the accelerator or hit Resume.

Parking is fully automated by simply keeping the button pressed. It takes a while to master, but once you do, it controls the brakes, throttle, steering, and gear shifting simply by keeping a button pressed. The first few times are nerve racking, but eventually you learn to trust it. 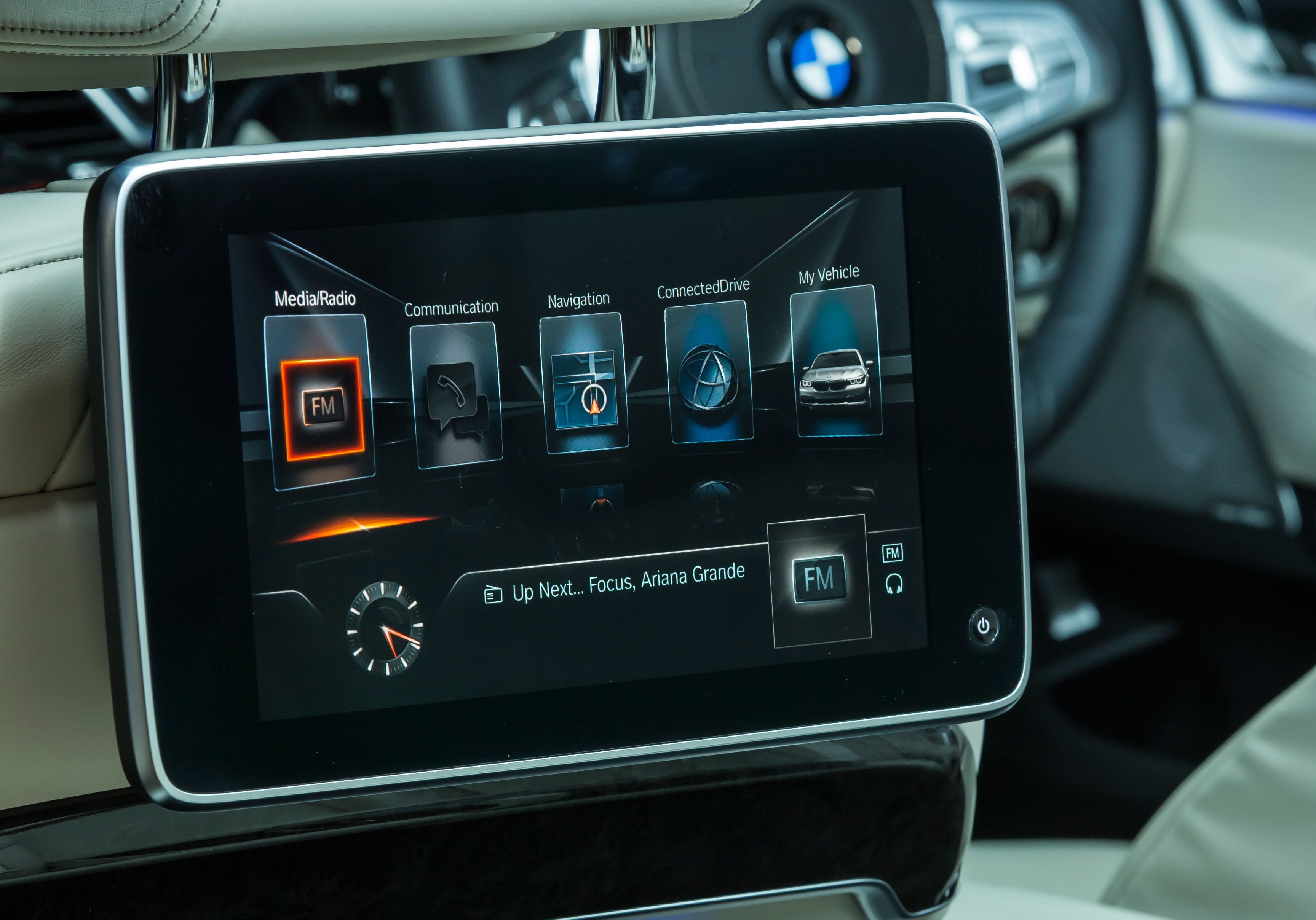 The 750Li has one last trick: there is a removable self-charging remote Inside the console. It has a discrete screen, which when woken up, displays car info such as whether you’ve locked the doors. It lets you know if the windows and sunroof are closed, and provides information on servicing.

That’s not all, you can get out of the car completely, and use the remote to reverse or drive forward 1.5 car lengths. It will get you in to, or out of, very tight parking spots. With a steady eye, you could guide it in a straight line with very little room to spare. 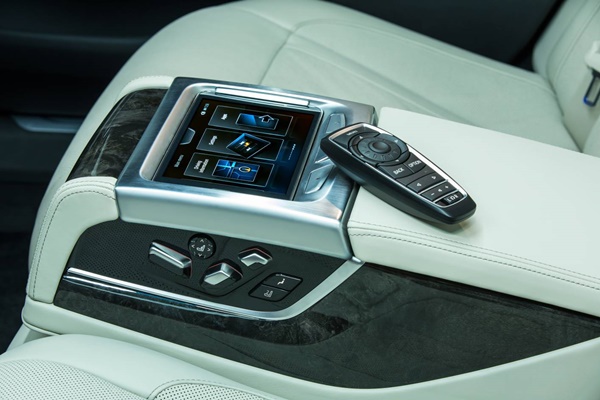 You can really throw it into tight bends, because it, after all, a BMW. Although it feels like the super-rigid body is going to roll hideously, the active suspension never allows anything so unattractive. We tested the 750 on some beautiful but appalling goat tracks.

The poorly kept road surface would upset most cars, and although you felt it, you certainly wouldn’t be disturbed by the nonsense going on underneath. Dare I say it, the bends were fun. In fact, the country drive was a revelation. The only thing missing was someone to enjoy it with. It must be said that hubby was happy to take a spin to a family function, in the back seat of course. It was converted to Gentleman Mode complete with TV, snacks, and fizzy water.

In town, the BMW is light and nippy, and on the highway, is long legged and relaxed. It livens up in the bends and feels like a frisky sports car. As hard as it is to believe, the bulk is completely negated by excellent engineering and clever electronics.

As usual for big German cars, the 2017 BMW 750Li will make an excellent choice for a posh buyer and is currently the biggest seller in this segment. BMW have 30.2% of the market, with 73 7 Series VS 64 Mercedes Benz S classes being sold so far this year. In a few years, the current 7 Series will make a fab second hand car.

SUVs are the biggest segment in our market and image is still important.  Audi has just brought in another hero car to its SUV fleet says David Brown. [Read More]

We have for a few weeks the GLX single cab 5th generation 2WD Triton tray back ute to test. Launched earlier this year the often overlooked the 2WD versions provide invaluable capacity for trades people, rural and mine uses. The world of work and recreational utes is highly competitive and an important part of the Australian new car vehicle market with over 200,000 sold last year. [Read More]