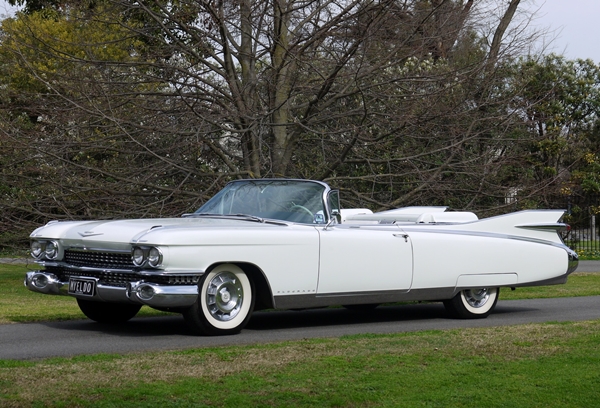 They are big, buxom, beautiful and they are all getting their tops off at Shannons on September 23 in time for summer.

Shannons have three spectacular American convertibles from the ‘happy days’ of the late 1950s crossing the block at their Melbourne Spring Classic Auction on September 23.

The ‘Marilyn Monroe’ of the trio is a vast 1959 Cadillac Eldorado Biarritz Convertible, considered by many enthusiasts to be the Holy Grail of American cars of the ‘finned’ era.

Finished in white with matching white trim and electric folding soft-top, this original left-hand-drive Biarritz is the perfect wedding car, or a motoring exclamation mark. With its signature jutting fins and ‘Jetsons’ taillights, it is the essence of American automotive excess.

Surprisingly for such an iconic model, the ’59 Biarritz Convertible is rare, with just 1,320 produced, making it very collectable.

Presented in restored condition with all of its many electronic gadgets in working order, Shannons expect this definitive Post-War Cadillac to sell in the $120,000-$140,000 range. And with the current softening of the Australian dollar, it would be difficult to land one of these in similar condition today for this price. 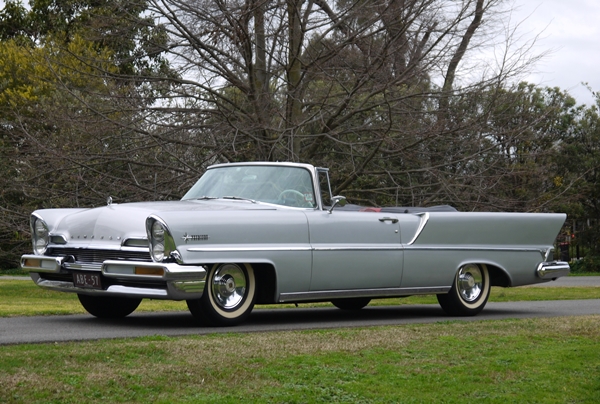 Almost as vast and even rarer today in Australia, where it is believed to be the only example in the country is a 1957 left hand drive Lincoln Premier Convertible that has been in the hands of its current owner for the past 16 years.

Originally painted Presidential Black, the Lincoln is now finished in the stylish colour combination of Silver with duo-tone red and black upholstery and has benefitted from a steady improvement program over the years by the vendor.

These enhancements includes replacing various items of trim and parts as necessary, while recent work has seen the brakes overhauled and the windscreen wipers have been converted to an electric system. 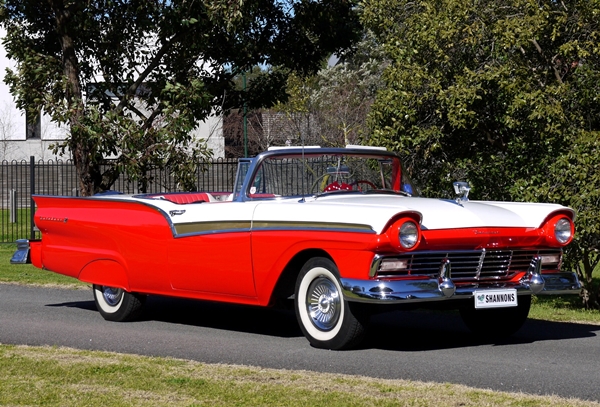 Also from the Blue Oval but even more collectable is a 1957 Ford Fairlane Skyliner ‘Retractable’ Convertible, spectacularly presented in white over red paintwork with matching vinyl trim.

Introduced in 1957 and available for just three short years, the Skyliner was based on the full-size Fairlane model and boasted a complex mechanism that automatically folded the roof and stowed it neatly in the boot of the car, making it the world’s only fully retractable hardtop of its era.

Powered by no less than three motors driving four lift jacks, the roof robbed the car of virtually all boot space when retracted, but practicality is likely to be low on the priority list of potential buyers at Shannons auction on September 23.

The Skyliner being auctioned arrived Australia in 2010 and is believed to have had just two prior owners in the USA.

The current owners have extensively refurbished the car since to bring it to its present high standard, including rebuilding the roof mechanism.

Fitted with a rebuilt Cleveland 351-cid V8 engine and C4 automatic transmission installed in March 2013, the car drives as well as it looks according to Shannons, who expect this glamorous car of the Chrome Age to sell in the $42,000-$52,000 range.

Subaru is teasing its second generation BRZ sports coupe with the launch of an online Register Your Interest section on subaru.com.au. Customers can register their interest from today, Monday May 3. [Read More]

The BMW 6 Series has long marked the intersection of the brand’s commitment to the premium motoring ideals of luxury, comfort and trademark driving dynamics. These values have been reaffirmed with the arrival of the new BMW 6 Series range, the updated Convertible, Coupe and Gran Coupe body variants [Read More]