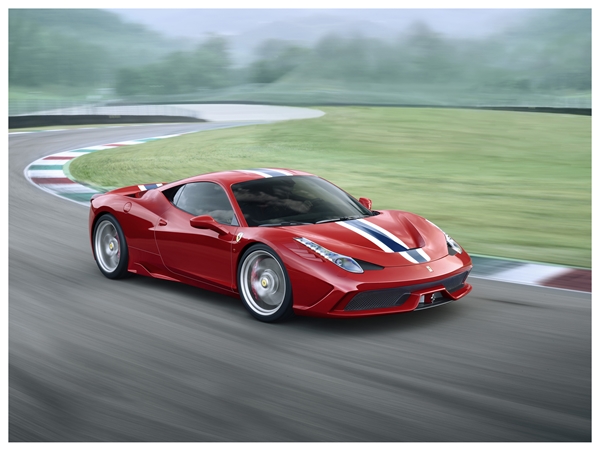 Ferrari’s stand at this year’s Frankfurt International Motor Show displays the most comprehensive range in its history. The newest addition is the 458 Speciale, an extreme sports car that joins the Coupé and Spider versions of the multi-award-winning 458.

The models exhibited are the concrete results of the Prancing Horse’s commitment to continuous investment. The company has poured 1,200 million euro into product development over the last five years and has set aside a further 2,000 million for the next five-year period. These figures do not, of course, include investments in Formula One, the technological advances and knowledge from which are routinely and extensively transferred to production models, with the new 458 Scuderia being unveiled today the perfect case in point.

As with all Ferrari special series models, the 458 Speciale boasts an array of technological innovations that make it a thoroughly unique model designed for owners looking for an even more focused sports car that offers extreme driving emotions. The innovations span the entire car and include both Ferrari patents and world firsts, particularly with regard to the engine, active aerodynamics and electronic controls that mark this car out.

Thanks to the Maranello engineers’ meticulous development, the technical differences between the458 Speciale and the 458 Italia are unprecedented compared to the previous Challenge Stradale and 430 Scuderia special series.

Whether on the road or on the track, drivers will feel immediately at one with the 458 Speciale thanks to the speed with which it responds to every input and the consequently natural control that it offers, even in extreme manoeuvres. This finely-tuned handling balance enables the car to reach the highest performance levels of any Ferrari V8.

The engine is the most powerful naturally-aspirated Ferrari V8 ever, punching out 605 cv at 9000 rpm and delivering an exceptionally high specific power output of 135 cv/l, comparable to power units designed for the track. The engine is produced in the factory’s in-house foundry using the same machinery and processes as employed by the F1 team. The F1 dual-clutch transmission’s new control logics deliver an even keener sense of urgency during acceleration, while the Fast Down-shift makes response to commands even more prompt when the car is shifting down through the gears.

One of the car’s main characteristics is new Ferrari-patented mobile aerodynamic solutions at the front and the rear of the car which ensure that different aerodynamic configurations can be adopted in cornering, where maximum downforce is essential, and on straights where, instead, drag must be reduced to a minimum. The 458 Speciale has an excellent downforce (Cl) value of 0.53. Thanks to the aforementioned active aerodynamics, the latter does not penalise the Cd which is just 0.35.

The 458 Speciale also confirms Ferrari’s leadership in vehicle electronics. Its Side Slip Angle Control (SSC) is a world first. Thanks to a sophisticated new algorithm, which computes lateral acceleration, yaw angle, steering wheel angle and speed, SSC instantaneously calculates the car’s side slip angle, comparing it with reference data, and then allowing smooth, controllable power oversteer, by optimising both torque management via F1-Trac traction control and the E-Diff electronic differential.

All of the components in the Brembo braking system have been evolved employing solutions introduced on the LaFerrari. Part and parcel of the Speciale’s development included Michelin Pilot Sport Cup2 tyres which were specifically honed for it in an intensive collaboration programme to boost performance over a single lap in the dry, performance consistency over multiple laps, and grip in the wet.

Weighing in at an extremely light 1290 kg, the 458 Speciale has an extraordinary weight-power ratio of 2.13 kg/cv, which translates into record-breaking performance: 0 to 100 km/h acceleration in a scorching 3.0” and a Fiorano lap time of just 1’23”5.

In collaboration with Pininfarina, the Ferrari Styling Centre has sculpted forms that are more performance-oriented than ever. The modifications to the bodywork were mostly made to underscore the car’s sporty character, and a huge effort was lavished on fulfilling aerodynamic demands without impinging on Ferrari’s signature styling features and aesthetic standards.

The cockpit features a distinctly racing-inspired atmosphere, with simplicity the order of the day. Lightweight exclusive materials, such as Alcantara and carbon-fibre, dominate, yet it still exudes the sense of craftsmanship and sophistication typical of all Ferrari interiors. The cockpit’s ergonomic layout, with all controls either on the steering wheel or clustered around the driver, is boosted too by the bridge which puts the gearbox commands at an ideal angle to the driver.

The range
Flanking the 458 Speciale on the stand, and representing the company’s more performance-oriented sports car range, are an F12berlinetta finished in Ferro Met with black interior, and a 458 Spider in Nero Stellato and Sabbia interior. The Prancing Horse’s GT heritage is ably represented by the California30, a convertible that marries performance and versatility. The car on the stand sports Bianco Italia bodywork and a Nero Daytona cockpit, and is flanked by the four-seater, four-wheel drive FF in Rosso Maranello with panoramic glass roof.

The Ferrari range is at the leading-edge in terms of environmental responsibility. The Prancing Horse’s substantial investment in emissions and fuel consumption reduction has resulted in average power output being boosted by 100 cv whilst slashing a massive 40 per cent off CO2 emissions.

Ready to Feel the Wind in Your Hair? Meet the Lexus LC Convertible Supercar

May 4, 2021 Pete Wilson Lexus, Lifestyle Comments Off on Ready to Feel the Wind in Your Hair? Meet the Lexus LC Convertible Supercar

If a supercar is in your future, you couldn’t do better than the 2021 Lexus LC Convertible. It manages to wrap everything up in an irresistible package of sporty, glamorous good looks. [Read More]