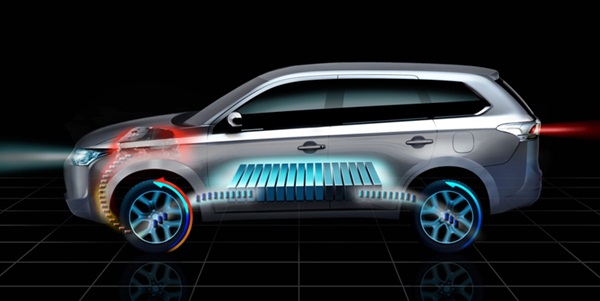 MMC announced today that later this year at the 2012 Paris Motor Show* (“Mondial de l’Automobile*), Mitsubishi Motors will continue its roll out of ambitious, global and green new product generation, with a series of significant premieres.

The highlight of this offensive will be the world introduction of the all-new Outlander Plug-in Hybrid EV.

Neither a mere adaptation of an existing Internal Combustion Engine (ICE) – powered vehicle, nor a dedicated Plug-in Hybrid technology showcase, the New Outlander Plug-in Hybrid EV (or “PHEV”) will share its architecture with the soon-to-be-introduced New Outlander’s ICE versions – an engineering feat in itself.

As such, it will be the first mainstream car from a major manufacturer envisaged from the outset with built-in provisions for either ICE or PHEV powertrains.

Adding to its credentials, the New Outlander PHEV will further distinguish itself:

Mitsubishi Motors’ first Plug-in Hybrid car, it will be an EV-based vehicle, relying on MMC’s extensive EV and electronic know-how, supplemented by a petrol engine when needed – a solution more suited to global markets than Diesel.
Making the best use of Mitsubishi’s renowned 4-Wheel-Drive expertise, it will also be the first permanent 4WD electric car in series production.
Long haul

Pure (Twin Motor 4WD EV)
Series (Twin Motor 4WD – EV supported by generator)
Parallel (ICE engine supported by Twin Motor 4WD).
When fitted to the New Outlander, the Mitsubishi Plug-in Hybrid system will allow for a long haul range and very low emissions similar to that of the Concept PX-MiEV II show car, i.e. a driving distance of over 800 km and a CO2 target below 50 g/km.

Whilst the New Outlander ICE will start its commercial career in Western & Easter Europe in the fall of 2012, the Outlander Plug-in Hybrid EV will be retailed in Europe during the course of 2013.

Complementing this New Outlander family, Mitsubishi Motors will stage further premieres at the Paris Motor Show, aimed at a European audience and to be detailed at a later stage.

The XL1 by Volkswagen is the most efficient production car in the world with a fuel consumption of 0.9 l/100km. Thanks to its plug-in hybrid system, the two-seater can also be driven for up to 50 kilometres locally in pure electric mode, [Read More]