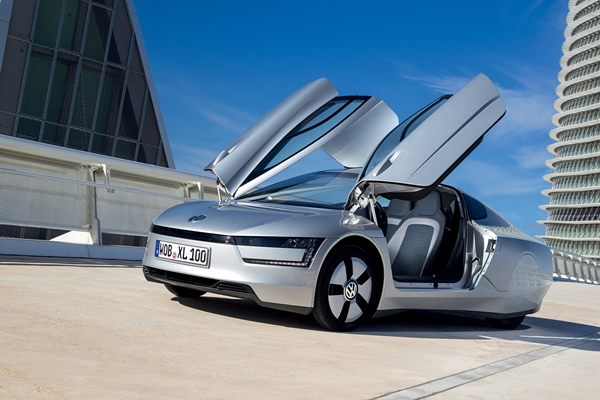 The XL1 by Volkswagen is the most efficient production car in the world with a fuel consumption of 0.9 l/100km. Thanks to its plug-in hybrid system, the two-seater can also be driven for up to 50 kilometres locally in pure electric mode, i.e. with zero emissions at point of use. The XL1 is an automotive hero that follows pure sports car design principles: low weight (795 kg), perfect aerodynamics (Cd 0.189) and a low centre of gravity (1,153 mm high). This gives the efficient Volkswagen the ability to cruise on the road at a constant speed of 100 km/h using just 6.2 kW. In all-electric mode, the XL1 requires less than 0.1 kWh to cover a driving distance of over one kilometre.

Third evolutionary stage of a vision Conceptually, the XL1 represents the third evolutionary stage of Volkswagen’s 1-litre car strategy. When the new millennium was ushered in, Prof. Dr. Ferdinand Piëch, who is today Chairman of the Supervisory Board of Volkswagen AG, formulated the visionary goal of bringing to market a production car that was practical in everyday use with fuel consumption of one litre per 100 km. In the two-seat XL1, this vision has become reality. Despite the very high levels of efficiency of the XL, developers were able to design a body layout that offers greater everyday practicality than in the two previous prototypes: While the driver and passenger sat in a tandem arrangement for optimal aerodynamics in the L1 – the 1-litre car presented in 2002 and in 2009 – in the new XL1, two occupants sit side by side, slightly staggered but almost like normal.

Shorter than a Polo, lower than a Porsche Boxster The XL1 is 3,888 mm long, 1,665 mm wide and just 1,153 mm tall. These are pretty extreme measurements if you go by familiar passenger car standards. By way of comparison: The Polo has a similar length (3,970 mm) and width (1,682 m) but is significantly taller (1,462 mm). Even a full-blooded sports car like the latest Porsche Boxster is still 129 mm taller (1,282 mm). The presence of the XL1 is correspondingly spectacular – a car of the future, built in the present day.

CFRP and aluminium dominate. A look at the scales shows why strong carbon fibre reinforced polymer (CFPR) is the ideal material for the body of the XL1. The Volkswagen weighs just 795 kg. Of this figure, 227 kg represents the entire drive unit, 153 kg the running gear, 80 kg the equipment (including the two bucket seats) and 105 kg the electrical system. That leaves 230 kg, which is precisely the weight of the body – produced largely of CFRP – including wing doors, front windscreen with laminated glass technology and the ultra-safe monocoque. A total of 21.3% of the new XL1, or 169 kg, consists of CFRP. In addition, Volkswagen uses lightweight metals for 22.5% of all parts (179 kg). Only 23.2% (184 kg) of the new XL1 is constructed from steel and iron.

Thanks to CFRP, the XL1 is not only light in weight but very safe as well. This is due in part to the high-strength and yet lightweight CFRP monocoque. In an emergency, it provides driver and passenger with the necessary survival space. In addition, the aluminium structures of the front and rear sections absorb the majority of the impact energy. These principles were likewise implemented in the design of the CFRP doors, where an aluminium absorbing beam is responsible for the absorption of the energy; moreover, a stiff CFRP door frame minimises the intrusions into the CFRP safety cell.

XL1 embodies what is feasible today. The new XL1 is currently the most fuel efficient and eco-friendly automobile in the world. The only reason that this vehicle could be built is because the limits of what is feasible both in terms of the technologies utilised and the manufacturing method were redefined. Consider XL1 technologies: Volkswagen is implementing the most innovative systems and materials that offer the highest efficiency possible today. Consider XL1 manufacturing: In Northern Germany, Europe’s largest carmaker has set up a completely new handcrafting-like production for the the XL1.

There are no current plans to launch the XL1 in the Australian market.