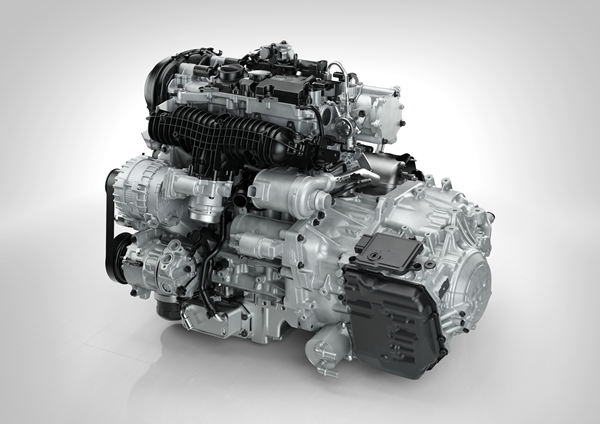 Volvo Cars’ new Drive-E range of powertrains takes efficient driving pleasure to a new dimension in which the number of cylinders is no longer important to describe power and drivability.

The first three engines from the two-litre, four-cylinder Drive-E powertrain family will be launched in Europe in autumn 2013. The diesel version features world-first i-Art technology, and the most powerful petrol version comes with a class-leading combination of a compressor and a turbocharger.

“We have created smaller, more intelligent engines with power curves that give exciting driveability compared with engines with more cylinders yet deliver the fuel economy of only four cylinders,” says Derek Crabb, Vice President Powertrain Engineering at Volvo Car Group.

“In addition, by adding electrification such as plug-in hybrid technology, we will reach power figures in the V8 territory.”

Several levels of turbo charging open up the flexibility to cover the whole range, from fuelefficient derivatives through to high power and torque variants. In order to cover all customer requirements, some engines will also gain added performance via electrification or other spearhead technology.

Volvo Cars’ powertrain experts have developed the engines in-house – they are being built at Volvo Car Group’s high-tech engine plant in Skövde, Sweden.

“Our four-cylinder engines will offer higher performance than today’s six-cylinder units and lower fuel consumption than the current four-cylinder generation.

“If you take a four-cylinder Drive-E engine versus any six-cylinder engine, there’s a massive weight and size reduction for the same power. Fuel economy savings are anything from 10 to 30 percent, depending on which engine you’re comparing it to.”

“Increasing the rail pressure to an exceptionally high 2,500 bar, while adding the i-Art technology, can be described as the second step in the diesel revolution. It is a breakthrough comparable to our invention of the lambda sensor for the catalytic converter in 1976. It’s another world first in passenger cars for Volvo,” says Derek Crabb.

Each injector has a small computer on top of it that monitors injection pressure. Using this information, the self-adapting i-Art system makes sure that the ideal amount of fuel is injected during each combustion cycle.

The combination of higher injection pressure and i-Art technology gives the customer an engine with improved fuel economy, considerably lower emissions and high performance output as well as a powerful sound character.

The diesels also feature refinements such as state-of-the-art twin-turbo, reduced friction and a smart valve solution on the cooling system for a more rapid heat-up phase after a cold start.

Petrol engine with compressor and turbo
Using the supercharger to fill in the bottom end torque gives the petrol engine a big, naturally aspirated feel. The mechanically linked compressor starts to function immediately at low revs, while the turbocharger kicks in when the airflow builds up.

Other improvements to the Drive-E petrol engines include friction-reduction measures such as ball bearings on the camshaft, high-speed continuous variable valve timing and intelligent heat management with a fully variable electric water pump.

Prepared for electrification The Drive-E engines are prepared for future electrification from the start. Key components, such as the Integrated Starter Generator, can be connected easily – and the compact size of the four-cylinder engines means that the electric motor can be fitted in the front or rear of the vehicle. The battery pack will be located in the centre of the car.

Downsizing without compromises
Volvo Car Group is highly confident that the focus on four-cylinder Drive-E powertrains is the right way to create the desirable blend of power, drivability and fuel efficiency.

“The power you get from an engine has nothing to do with its size; it is about the amount of air that you can get to flow through it. You can also make an engine more efficient if you make it smaller. So, if you can get more air through a smaller engine, you can still get the same power but at better efficiency,” says Derek Crabb.

“When I was involved in Formula One engines, they were producing 1.5-litre turbocharged engines capable of over 900bhp. And these new Volvo Drive-E engines have in fact been tested on the racetrack already. The engine we used in Volvo’s WTCC car in 2011 was a Drive-E prototype and by the last race we set a new track record.”

The local roll-out schedule of the new Drive-E engines in Australia will be confirmed in due course.

An Australian team driving a Hyundai NEXO fuel cell electric vehicle (FCEV) has broken the world record for the longest distance travelled in a hydrogen-powered vehicle on a single tank. [Read More]

If you’re looking for a stylish everyday car, make sure you stop by Honda and take the Civic VTi for a spin! I would like to mention that the Civic range has 5 spec ranges and the VTi is the bottom of the range, but it offers the basics with a bit of luxury and technology and comes in just over $25,000 the Honda Civic VTI is for you! [Read More]