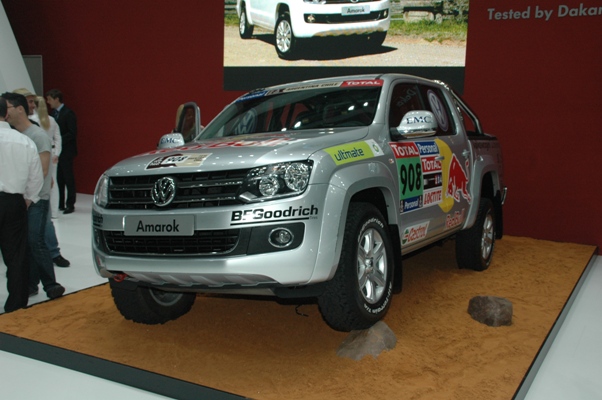 The new Volkswagen Amarok has been honoured with the International Pick-up Award 2011. Set for launch in the Australia in March 2011, the Amarok boasts the largest load dimensions in its class

The accolade, awarded for the first time this year, was judged by the highly regarded panel, representing 23 countries, that elects the prestigious International Van of the Year awards.

During the judging process, the Amarok was praised by the jury for its ‘effortless off-road abilities’, while its capacity on-road was judged to be the best against all other competitors. The jury was also impressed by the Amarok’s interior, in particular, the layout and generous space for both front and rear passengers in the double-cab cabin.

On the Amarok’s success, the jury commented: ‘The new Volkswagen Amarok distinguishes itself by fantastic driving qualities, both on- and off-road. It sets new standards in the pick-up category in respect to load capacity, interior room, comfort, ergonomics and fuel consumption.’

Australian prices and specifications for the Amarok will be released at launch in 2011.

Toyota adopts a more Rugged X look with its upmarket HiLux version now with more power. In early 2018 Toyota moved its HiLux range upmarket with the introduction of the Rogue and Rugged X. [Read More]

So let’s sum up my thoughts! The Ford F350 6.7L V8 Diesel Super Duty Platinum will seat five adults in comfort, is full of luxury features, will tow more than anything else on the market in this segment, has awesome power and torque, more than capable off the main roads, has huge cargo capacity and is super cool [Read More]