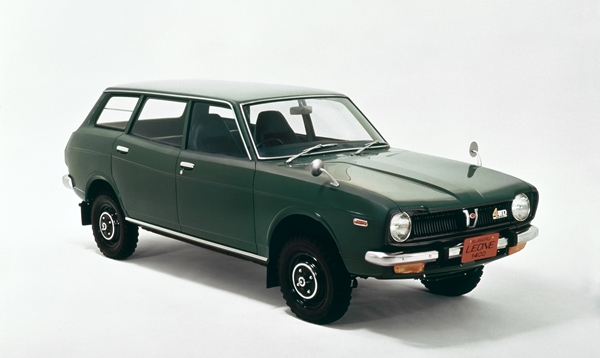 Subaru celebrates the 40th anniversary of its signature Symmetrical All-Wheel Drive (SAWD) system this year and will mark the occasion with a showcase at next month’s Geneva International Motor Show (March 8-18).

SAWD was introduced in 1972 on the Leone wagon in Japan. In the ensuing years, Fuji Heavy Industries (FHI), the maker of Subaru vehicles, has hugely refined the technology.

The SAWD system provides optimum traction by distributing engine power to all four wheels in a balanced manner.

SAWD combines with Subaru’s flat horizontally opposed Boxer engine to produce a perfectly symmetrical power train and low centre of gravity – the lack of major components sitting either side of the powertrain results in great balance, stability, response – and the driving fun for which Subarus are famed.

Continuous research and development over 40 years has refined the SAWD technology, making the system ideal for a wide variety of conditions, from rough roads to rain and snow.

The latest technology includes four-wheel traction management, giving firm and accurate grip to all four wheels, all the time.

Subaru’s original electronically controlled Multi Plate Transfer (MPT) adjusts torque distribution to the front and rear wheels in real-time, to suit driving conditions. The system usually distributes torque 60:40 front:rear. It maximizes the benefits of AWD by providing stability and safety, regardless of the driver’s skill in any driving situation.

The system is a combination of the bevel-gear-type centre differential and the viscous LSD. A 50:50 front:rear torque distribution is set under normal conditions. It delivers stable and sporty driving that always maximizes available traction.

The electronically controlled DCCD AWD system employs a combination of torque sensing mechanical LSD and electronically controlled LSD. It provides a performance-oriented 41:59 front:rear torque distribution for optimum vehicle dynamics control. The mechanical LSD has a quicker response and activates just before the electronic LSD. While managing large torque, the system demonstrates the highest balance between agility and stability. There is the choice of automatic LSD control modes and manual mode, which the driver can select according to conditions.

*Including the productions of part-time 4WD vehicles

Subaru Outback gets even more specification in the new model

Subaru is significantly elevating the specification list across its entire new generation Outback range, which appears in showrooms from March 2021. [Read More]

This is the Motoring Minute weekly news for Saturday 3 December 2021 with a roundup of all that is new or interesting in the Australian Automotive landscape.   [Read More]