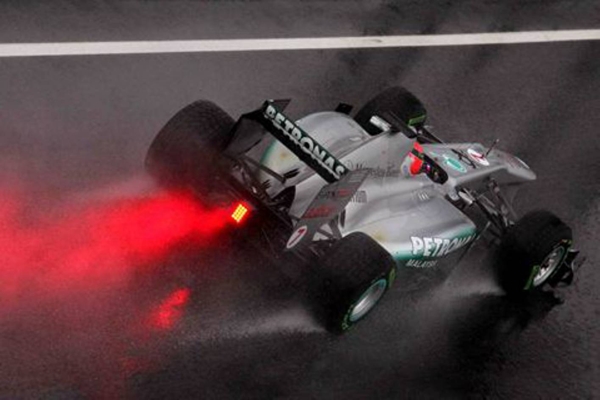 Pirelli started its build-up to Formula One this year with a preliminary test at the Italian circuit of Mugello on 19 August 2010, held in ambient temperatures that peaked at 27 degrees centigrade (with 35 degrees track temperature). The 2011 testing campaign ended seven months later at a rain-lashed Barcelona circuit in Spain, with just 13 degrees on Saturday.

Of that total distance, 18,000 kilometres were driven in private testing using a Toyota TF109 adapted to simulate the 2011 Formula One regulations, with Nick Heidfeld, Romain Grosjean and Pedro de la Rosa behind the wheel.

The rest of the distance was racked up during the 15 days of official testing carried out by the teams in the build-up to the 2011 season.

The drivers who have completed the least distance are Vitantonio Liuzzi with 326 kilometres, Jarno Trulli (1028), Nick Heidfeld (1140) and Heikki Kovalainen (1182).

The final test in Barcelona, arranged at short notice after the Bahrain Grand Prix did not take place as the season-opener, covered five days, with each of the teams running for four days each. Weather conditions were dry over the opening four days in northern Spain, with ambient temperatures peaking at 27 degrees centigrade on Thursday, but on Saturday the four teams that were still testing – Ferrari, McLaren, Mercedes and Williams – experienced heavy rain for the first time, with 10 millimetres of water soaking the track in the morning.

In fact, conditions were too wet for any constructive running to take place on the final day, with the four teams completing only a total of 101 laps. With deep standing water on the straights, conditions were extremely difficult for the five drivers who took to the track.

During the five days of the Barcelona test, the teams completed a total of 3555 laps, equalling approximately 16,548 kilometres. The team covering the most distance was Sauber, which racked up 390 laps or 1815 kilometres in four days. The fastest time of the test was posted by Michael Schumacher (Mercedes), who set a time of 1m21.268s on Friday, comfortably eclipsing the benchmark of 1m22.625s established by Felipe Massa (Ferrari) at the previous Barcelona test last month. The team with the most wet-weather experience is also Mercedes, which completed 40 laps today in soaking conditions.

Over the previous four days held in the dry, the majority of the teams tested the hard and soft compound of Pirelli PZero tyre, which has been nominated as the prime and option rubber respectively for the first three races of the season. The two remaining PZero compounds – the supersoft and medium – were also available in Barcelona, with each team having 35 sets at their disposal in total.

Pirelli’s Motorsport Director Paul Hembery said: “It’s certainly been a very interesting five days, where we’ve experienced a huge variety of weather conditions. We had a brief window of optimal conditions in the afternoon during the week, where temperatures were finally high enough for our hard and soft compound rubber to come into its ideal operating range. This enabled a number of the teams to carry out race simulations, which revealed some interesting data. Then on Saturday, we had a deluge – but the conditions were really too wet then for the four teams present to learn anything significant. What we have seen over the course of the test, particularly during the race simulations, is a wide variety of strategies, which promises an exciting season ahead. During the previous test in Barcelona, we calculated from the race simulations that there were 54 potential overtaking opportunities – and that was without all the cars present. Australia is sure to be very different to Barcelona, but now we’re just looking forward to getting started.”

The Australian Grand Prix, which marks Pirelli’s return to Formula One for the first time in 20 years, takes place on March 27 at Albert Park in Melbourne

When Santa has some spare time he reads Prestige Car Guide to get the latest prestige lifestyle tips and news and reviews on Prestige Cars. He knows ” IF ITS NOT HERE – IT NOT PRESTIGE”! [Read More]