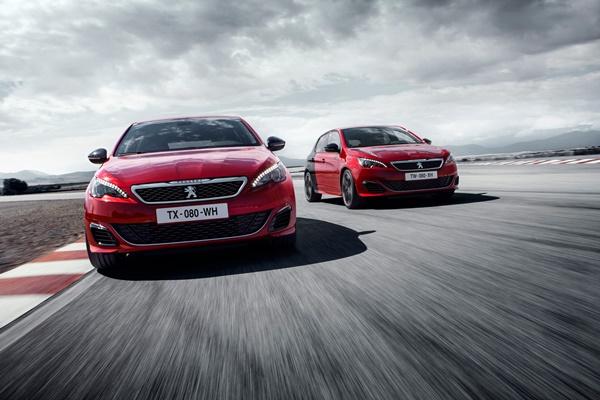 Peugeot Australia has confirmed that it will launch not one, but two, versions of its hotly anticipated hot hatch, the 308 GTi in the first quarter of 2016.

Developed in conjunction with Peugeot Sport both models will be powered by a powerful 1.6-litre THP petrol engine developing either 182kW (250hp) or 200kW (270hp) – both paired to a six-speed manual transmission.

Peugeot Sport’s involvement has taken the very capable 308 chassis and elevated it to produces top-level road holding and driving pleasure, with performance enhanced by a Torsen® limited-slip differential in higher powered models.

The visceral vehicle is encased in a modern exterior style that takes the marque’s now-familiar design and adds a touch of aggression.

Inside, the Peugeot i-Cockpit cabin has been enhanced to reflect the sporting nature of the car, with additional detailing to signify this performance flagship.

General Manager of Peugeot Australia, John Startari, said the addition of the 308 GTi will bring an iconic nameplate and its performance credentials to Australia’s buoyant hot hatch market. 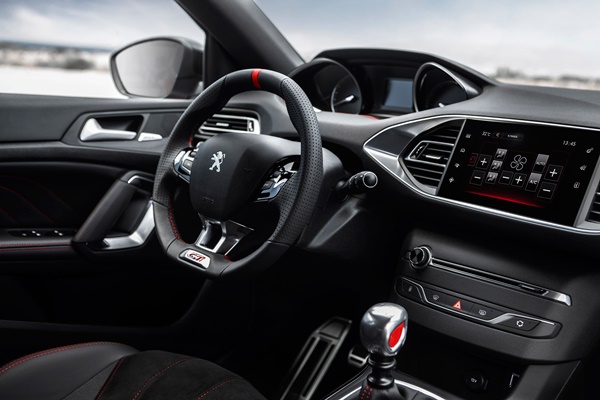 “For 30 years the GTi badge has held an esteemed position in the motoring world and now Peugeot Sport have taken a highly awarded vehicle and applied their engineering prowess to give it the performance credentials worthy of the badge.

“The launch of the 308 GTi signals Peugeot is back and we are back doing what we do best; offering fun, efficient, enjoyable, comfortable and, in the case of 308 GTi, thoroughly engaging performance vehicles.

“The 308 GTi will certainly give hot hatch customers a reason to look forward to 2016,” said Startari.

“As with competition models, in developing the 308 GTi, we targeted all aspects of the car, including weight, the efficiency of the chassis and brakes, the engine performance and the body-hugging seats,

“Those who buy the car are set for an intense experience with this new version developed by our entire team. It comes with a raft of high-end performance features as standard,” says Bruno Famin, Director of Peugeot Sport.

“The Peugeot 308 provided an excellent base from which to develop a hot hatch, and our work mainly lay in optimising the original design to achieve engaging performance. But you have to get the 308 GTi on the road or on the circuit to really experience its true potential,” offers Pierre Budar, Peugeot Sport Project Manager

A state-of-the-art engine
The beating heart of the 308 GTi by Peugeot Sport is a Euro 6-compliant 1.6-litre THP S&S (stop-start) engine, available in outputs of 182kW and 200kW – enough to see the vehicle accelerate to 100km/h in as little as six-seconds (6.2 for the 182kW drivetrain).

Both versions develop peak torque of 330Nm at just 1,900rpm and feature a six-speed manual transmission.

The GTi 270 version has everything required to rein in the power, with race-developed 380mm ventilated discs mounted on aluminium hubs at the front.

Braking force is applied via four pistons (38mm and 41mm) in a fixed calliper and the rear discs have a diameter of 268mm.

The pseudo-MacPherson strut in the front operates with precision, while the rear axle with its twist-beam system ensures a seamless pairing.

These components also help reduce the weight of the 308 GTi, in addition to a semi-hollow anti-roll bar and aluminium wishbones.

The entire vertical suspension system in the front is specific to the new 308 GTi, and includes bespoke spring stiffness and shock absorber calibration. The anti-roll bar is more malleable to ensure a better match with the rear axle that enhances grip while cornering to increase road holding.

Exclusive to the GTi 270 version is an accomplished Torsen® limited-slip differential incorporated into the transmission to improve cornering traction. By channelling the torque to the wheel with the highest grip it makes it more able to accelerate faster out of bends than would normally be the case.

The engine runs on RON 95 or RON 98 fuel and injection pressure is 200bar. Maximum torque ranges from 1900 to 5000rpm, with power and torque perfectly regulated, even at higher rpm, due to the special wastegate design on the turbocharger.

The compression ratio is 9.2:1 due to state-of-the-art moving components, which include forged aluminium pistons of a competition-style design, strengthened connecting rods, polymer-enhanced bearings and reinforced fasteners.

To ensure consistent performance the pistons are cooled from below by a double oil spray system and the exhaust manifold is made of steel which can resist temperatures of up to 1000°C.

To tap the full potential of the engine the 308 GTi by PEUGEOT SPORT is equipped with a supercharged air-cooling system specially developed and installed below the front bumper.

The on-board electronics are in keeping with the GTi’s athletic temperament. The power steering is designed specifically to work in conjunction with the Torsen® technology. 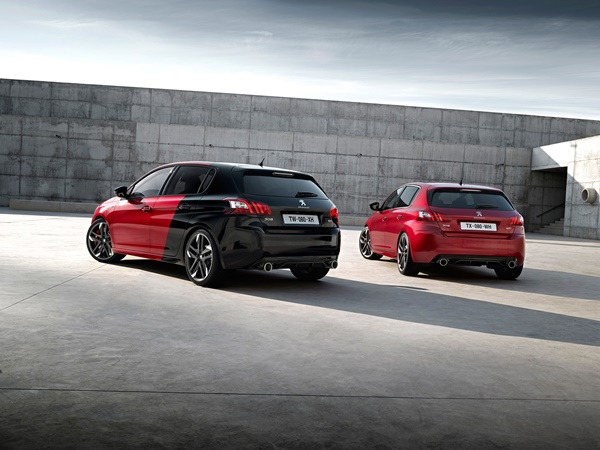 Advanced engineering at every turn
Peugeot Sport developed the new 308 GTi driven by a simple design brief – to create a compact, safe, incisive car with athletic allure for the ultimate in driving pleasure.

These standards have been applied to every aspect of the vehicle, from the engine and running gear to the brake systems and electronics.

The 308 GTi benefits from Peugeot’s relentless quest for weight savings right from the start of the 308 project.

These include use of parent company PSA’s versatile and accomplished ‘EMP2’ platform, composite tailgate and use of high-tensile steel. This bid to lighten the vehicle weight has brought tangible results expressed in the performance of the 308 GTi by Peugeot Sport.

A stunning and purposeful exterior
Boasting exclusive styling front and rear the car sits 11mm lower than the standard 308.

The same motif is echoed on the air intake, which is surrounded by sequential LED indicators and a red detail strip (chrome on Ultimate Red cars).

In profile the redesigned door sills hint at the car’s aggressive nature, while the sleek new rear design features a gloss-black section housing the twin exhaust pipes. The GTi signature of the car is clearly visible on the front wings and tailgate.

A ‘Coupe Franche’ two-tone design is exclusive to the GTi 270 version and contrasts the vibrant new ‘Ultimate Red’ colour with Nera Black.

A dramatic new interior
The interior styling of the 308 GTi by Peugeot Sport is in keeping with its performance-oriented exterior, and outstanding attention to detail is everywhere.

Red stitching is used on the upholstery, door panels, gear lever and luxury floor mats. The door sill carries the GTi and PEUGEOT SPORT signature and is finished in aluminium. The same material is used on the pedals, foot rest and gear knob.

In the top-spec GTi 270 version, Peugeot Sport ‘bucket’ seats are upholstered in Alcantara with red stitching providing cosseting lateral support to ensure the driver feels at one with the car at all times.

The compact steering wheel offers strong grip and precision, with a full-grain leather design featuring the GTi logo at the bottom and a red centring mark at the top. It also leaves plenty of room to see the head-up display over it, housing the instrument panel read-outs with chequered backdrops, and the GTi greeting at its centre.

The Peugeot i-Cockpit instrument concept has been an integral aspect of the 308’s appeal with a centrally-mounted, driver-facing touch-screen offers ergonomic convenience and state-of-the-art functionality, with the Redline theme adding a final touch of flair.

Adding to the performance experience is the standard fitment of the Driver Sport Pack.

So what is all the fuss over the WRX for? Surely it is just a hotted up sedan. Well to say that is selling the WRX STI Premium short. [Read More]

The Kia Picanto GT is the tiny car punching way above its weight. I must say, this car impressed me from the get go. As soon as I jumped in, I felt an unexpected level of comfort and impressive design. [Read More]

Holden fan, Eu Wyn Wong has triumphed in the ‘Name That Commodore’ competition launched exclusively on the Holden Facebook page in January. The Commodore SV6 Lightning Special Edition is available on SV6 sedan and ute variants, and includes a number of additional features. [Read More]