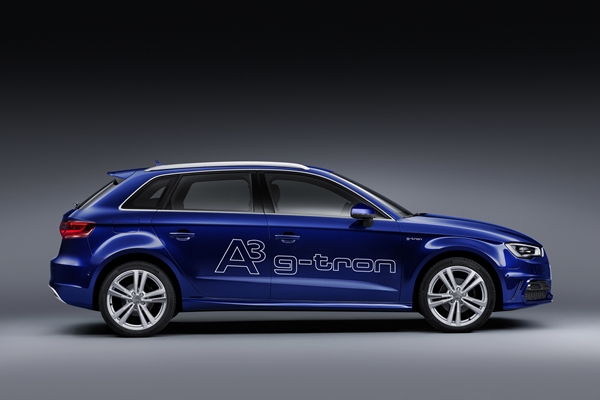 Audi is taking a big step towards sustainable mobility with the A3 Sportback g-tron. The compact five-door car, due to make its debut at the end of the year, is powered by the CO2-neutral fuel Audi e-gas. The fuel will be produced in the power-to-gas plant in Werlte, Germany. This new car innovatively combines ecological balance, economy and high-tech solutions.

The Audi A3 Sportback g-tron comes with the full gamut of Audi’s technology expertise – from ultra-lightweight technology, and infotainment, to driver assistance systems. But first and foremost it showcases state-of-the-art CNG drive technology, starting with the fuel storage. Its two tanks under the luggage compartment floor can each hold seven kilograms of CNG at a maximum 200 bar pressure. In tune with the ultra-lightweight construction concept, each tank weighs 27 kilograms less than its conventional counterpart.

A second highlight of the Audi A3 Sportback g-tron is its electronic gas pressure regulator. This compact and lightweight component reduces the high pressure of the gas flowing from the cylinders down to around five to nine bar in two stages.

It ensures that the right pressure is always present in the gas rail and at the injector valves – low pressure for efficient driving in the lower speed range, and higher when the driver calls for more power and torque.

If the pressure in the tank drops below 10 bar, the engine management system automatically switches over to gasoline operation. The Audi A3 Sportback g-tron’s performance figures are identical in CNG and gasoline modes.

CNG provides a range – based on standard fuel consumption – of around 400 km, with gasoline providing another 900 km if necessary; the total range is approximately on a par with an Audi TDI. Two displays in the instrument cluster provide the driver with up-to-date information on the fuel level in each of the tanks. The driver information system also displays the current fuel consumption based on the particular operating mode.

The two filler necks are placed under a common fuel flap. After refueling, and whenever it is very cold, the engine is started with gasoline initially, then it is switched over to natural gas as quickly as possible.

The engine is based on the new 1.4 TFSI. Key modifications relate to the cylinder head, turbocharging, injection system, and the catalytic converter. Developing 81 kW and 200 Nm of torque, the Audi A3 Sportback g-tron has a top speed of 190 km/h, with 0 to 100 km/h taking 11 seconds. The five-door car consumes on average less than 3.5 kilograms per 100 km of CNG or Audi e-gas – the fuel that is generated from eco-electricity in the Audi e-gas project. CO2 tailpipe emissions are less than 95 grams per km in gas mode.

The greenhouse gas balance is even more attractive in a well-to-wheel analysis that accounts for all factors from the fuel source to the car’s wheels. When the A3 Sportback g-tron is powered by Audi e-gas, no more CO2 is released than was chemically input in its production beforehand – creating a closed loop. When the energy required to build the e-gas facility and wind power generators is included in a comprehensive analysis, CO2 emissions are still less than 30 grams per km.

Buyers of the Audi A3 Sportback g-tron will presumably obtain the e-gas at the public CNG refueling stations via an ecological accounting­ method, similar to the method currently in existence for obtaining eco-electricity.

With the e-gas project, Audi is the first automobile manufacturer to develop an entire chain of sustainable energy carriers. The start of the chain has electricity produced from renewable energy sources; the end products are hydrogen and the synthetic Audi e-gas. Construction of the world’s first industrial plant to produce synthetic methane (e-gas) from CO2 and renewable electricity is almost complete in Werlte (Emsland district of Lower Saxony), Germany.

The Audi e-gas plant uses the renewable electricity in the first stage for electrolysis – splitting water into oxygen and hydrogen (Audi e-hydrogen), which could one day power fuel-cell vehicles. Because there is not yet a widespread hydrogen infrastructure, however, the hydrogen is then reacted with CO2 in a methanation plant to produce renewable synthetic methane, or Audi e-gas. Chemically speaking, this e-gas is identical to fossil-based natural gas. As such, it can be distributed to CNG stations via the natural-gas network.

Thanks to the power-to-gas process, the electricity grid and gas network are being linked bi-directionally for the first time. Until now while you could generate electricity from gas, the reverse was not possible. The Audi e-gas plant therefore paves the way for tapping into the natural-gas network with its huge capacity as a storage and transport system for hitherto excess electricity capacity.

The CO2 used in Audi’s e-gas plant is a waste-product from a nearby biogas plant, operated by power utility EWE. The CO2, which would otherwise pollute the atmosphere, is chemically bonded into the fuel at the Audi e-gas plant. The e-gas plant will annually produce about 1,000 metric tons of e-gas and will chemically bind some 2,800 metric tons of CO2. This corresponds roughly to the amount of CO2 that 224,000 beech trees absorb in a year.

The CO2-neutral e-gas from Werlte will power 1,500 new Audi A3 Sportback g-tron vehicles 15,000 kilometres every year. The power industry can also benefit from Audi’s e-gas project, as it addresses the nagging challenge of how to store large quantities of renewable electricity produced from wind turbines and photovoltaic systems efficiently and irrespective of location. The electricity-gas cogeneration technology could significantly foster the expansion of renewable energies.