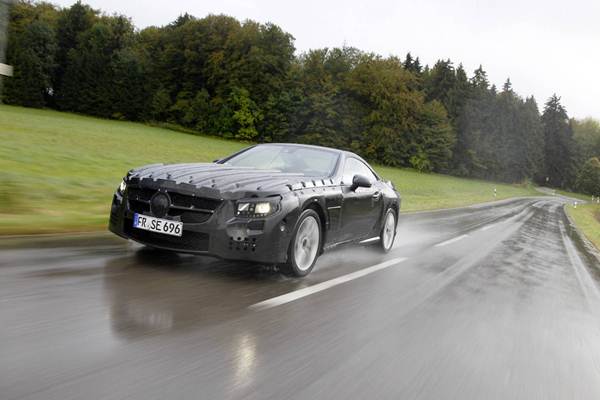 Mercedez-Benz is re-developing its SL Roadster. For the first time it will be made almost entirely from aluminium. The full aluminium bodyshell of this newly developed vehicle weighs around 110 kilograms less than a comparable bodyshell constructed with the technology used for its predecessor. It thus reduces the overall weight of the new SL by 140 kilograms compared to its predecessor. At the same time, the new generation of this luxury sport car can be converted into an open or a closed concert hall. This is thanks to the new bodyshell structure which makes possible the FrontBass system, unique in the world and also celebrating its debut. As a further world first, Mercedes-Benz is also presenting the highly effective MAGIC VISION CONTROL adaptive windscreen wipe/wash system. It delivers water requirement-based and depending on the direction of wipe, directly to the wiper blade; neither a water jet nor a film of water can be seen, and yet the windscreen stays perfectly clean for the driver and passenger.

The new-generation Mercedes-Benz SL takes the meaning of the letters “SL” – sporty, lightweight – very seriously. Consistent weight reduction is one of the most outstanding design results in the new SL as was the case in its namesake, the original SL of 1954. For the first time Mercedes-Benz implements a full aluminium bodyshell in large series production. Only very few components are made from other materials. The designers use the even lighter magnesium for the rear panel. High-strength steel tubing is integrated in the A-pillars.

The newly developed car weighs around 110 kilograms less than a comparable bodyshell constructed in analogous manner to the previous technology. “The effect is rather as if a heavyweight-class passenger had got out of the car and taken his heavy flight luggage, too” says Dr Thomas Rudlaff, responsible for the aluminium bodyshell at Mercedes-Benz. “The result is perceptible and measurable. Less weight means more dynamism and less consumption. In other words: the motoring enjoyment increases and the environmental burden sinks.”

In terms of rigidity, safety and comfort, the aluminium structure proves superior to the predecessor’s steel construction. This is achieved thanks, among other things, to its intelligent lightweight construction with components optimised for their specific task. Thus, diverse processes are used to make different kinds of aluminium depending on the use the component is to be given: the parts are made by chill casting or vacuum die casting, worked into extruded aluminium sections or into aluminium plates of different thicknesses. The result: high rigidity, high safety levels and low resonance and vibrations.

With two further innovations, the new SL remains true to its tradition as technological trend setter:

MAGIC VISION CONTROL is a new intelligent, high-efficiency windscreen wiper/washer system. Its system of channels supplies water to the windscreen just in front of the wiper blade lip in the direction the wiper is moving. As a result, when spraying one no longer sees a water splash on the windscreen to disrupt one’s visibility, and yet the windscreen is kept perfectly clean.
The likewise unique FrontBass system uses the free spaces in the aluminium structures in front of the footwell as resonance spaces for the bass loudspeakers. As a result the new SL features clear, crisp bass sounds that make possible a concert hall ambience even with the top down.
Both innovations are part of the extensive standard equipment of the new SL.

Mercedes-Benz in Court with dealers over payments

Mercedes-Benz and Lonely Planet have launched a new online campaign to encourage Australians to explore something out of the ordinary. [Read More]