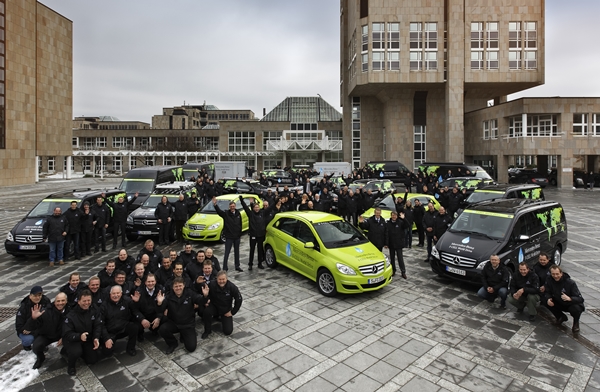 Mercedes Benz Fuel Cell B Class vehicle to drive 30,000 kilometres in 125 days around the world as part of the 125th Anniversary celebrations.

As part of the ceremony to mark the 125th birthday of the invention of the motor car on 29 January in Stuttgart, German Chancellor Dr. Angela Merkel and Dr. Dieter Zetsche, Chairman of the Board of Management of Daimler AG, fired the symbolic starting shot for the Mercedes-Benz F-CELL World Drive. Setting out from Stuttgart on 30 January, three Mercedes-Benz B-Class vehicles featuring local zero-emission fuel cell drives are undertaking a 125-day circumnavigation of the world.

Travelling across four continents and through 14 countries, the three B-Class F-CELL vehicles will head around the globe once, finishing their “world tour” back in Stuttgart where they started. With the F-CELL World Drive, Mercedes-Benz is aiming to confirm the technical maturity of fuel cell technology, as well as the suitability for everyday use of the vehicles. At the same time, the company will also take the opportunity to enforce the political call to establish a comprehensive filling station infrastructure for fuel cell vehicles.

On January 29, 1886, Carl Benz filed the patent for his three-wheeled “vehicle with gas engine operation” under number 37435, thus setting the first milestone for a completely new form of mobility. Some 125 years to the day later – on 29 January 2011 – Daimler AG is taking this date as an opportunity not only to look back through history and highlight the milestones of automotive development, but also to give a specific insight into the future of mobility. The symbolic start of the F-CELL World Drive, the first circumnavigation of world using standard-production fuel cell vehicles, therefore also took place as part of the celebrations. After the three Mercedes-Benz B-Class F-CELL vehicles – which are starting their long journey on January 30 – were driven onto the stage by Mercedes-Benz racing drivers Michael Schumacher, Nico Rosberg and David Coulthard, the symbolic starting shot was fired by Dr. Dieter Zetsche, Chairman of the Board of Daimler AG, together with German Chancellor Dr. Angela Merkel.

Over a route covering 30,000 kilometres, the three Mercedes-Benz B-Class F-CELL vehicles will demonstrate that they are a safe and reliable means of transport over long distances and in the widest variety of road and weather conditions. “Some 125 years after the invention of the motor car, for us the B-Class F-CELL embodies its reinvention”, explains Dr. Dieter Zetsche, Chairman of the Board of Management of Daimler AG, commenting on the significance of the innovative fuel cell vehicle. “As an event which is currently unique, this circumnavigation of the world in customer-ready fuel cell vehicles again demonstrates that we have sufficient pioneering spirit for at least another 125 years of innovation.”

On the road with the fuel cell

Electric vehicles with fuel cell combine the benefits of a long range with a short refuelling time. As a result they are able to make a contribution towards local zero-emission mobility not only in densely populated areas, but also over long-distance routes. In addition, besides their use in passenger cars, fuel cell drives can also be used in a variety of other vehicle types, such as urban buses for example. Mercedes-Benz recognised this potential at an early stage, launching the first vehicle with fuel cell drive, the NECAR 1, as early as 1994. Since that time, the company has made very significant progress in the development of this technology, enabling it in the meantime to reach a very high level of technical maturity. As a result, for the first time all of the development and production standards applicable to series production vehicles have now also been applied to the B-Class F-CELL. All of the F-CELL components comply with the highest of Mercedes-Benz standards in terms of their quality, reliability and service life.

Besides local zero-emission mobility, the B-Class F-CELL also provides all of the brand-typical characteristics, such as safety, comfort, superior performance and also exemplary functionality, in combination with complete suitability for everyday use and unrestricted driving pleasure.

With the F-CELL World Drive, Mercedes-Benz wants to prove the high degree of maturity which has been achieved with fuel cell technology and also highlight its potential on a global basis. At the same time the circumnavigation of the world will also draw attention to a significant challenge: the infrastructure for the provision of hydrogen. “This type of electric mobility can only be implemented on a comprehensive scale when it is backed by a network of hydrogen filling stations designed to meet demand. This filling station network now has to be developed by joining forces,” explains Dr. Thomas Weber, Daimler AG Board Member responsible for Group Research and Development, Mercedes-Benz Cars. “We have done our homework: the B-Class F-CELL shows to impressive effect the contribution which electric vehicles with fuel cell are already able to make to future mobility. The vehicle enables local zero-emission motoring not only over short routes but also over longer distances. We will demonstrate this with our F-CELL World Drive,” confirms Dr. Thomas Weber. 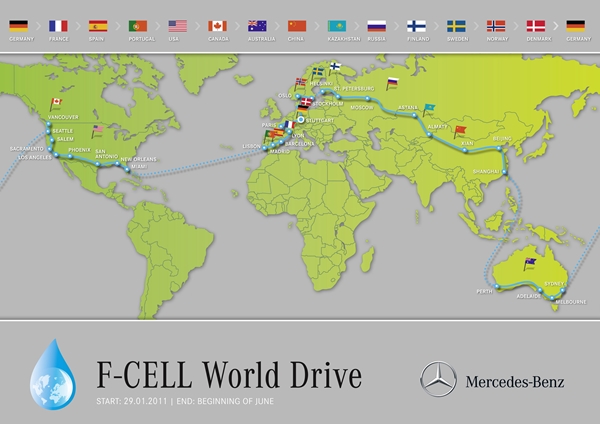 Setting off from Stuttgart on January 30, the tour will initially head south via Paris, Barcelona and Madrid, to the Portuguese capital of Lisbon. There the cars will leave European soil and continue their journey by plane to the East Coast of the USA.
From Fort Lauderdale, Florida, the route heads across the North American continent, along the Gulf of Mexico, leading westwards to Los Angeles, California. Then, travelling along the west coast of the USA, the F-CELL World Drive will go north, finally reaching Vancouver, Canada. After driving for roughly one month and covering more than 7500 kilometres, the vehicles will leave North America, in order to continue their tour in the east of Australia. Starting in Sydney, the B-Class F-CELL vehicles will head along the south coast of the fifth continent, covering more than 5000 kilometres, with stopovers in Melbourne and Adelaide, until reaching Perth. The last transfer between continents on the world tour will finally take the F-CELL World Drive to the continent of Asia, to the destination of Shanghai in China.

Travelling via the Chinese capital of Beijing, the fuel cell cars will cover a distance of more than 10,000 kilometres across the continent of Eurasia, heading through the Kazakh cities of Almaty and Astana, to Moscow. This is a stretch of the route with which Mercedes-Benz is already very familiar. In 2006 no less than 33 Mercedes-Benz
E-Class vehicles passed through this region, in the opposite direction from Paris to Beijing, as part of the “E-Class Experience”.

On the last stage, the route will head through Northern Europe. From St. Petersburg in Russia, the cars will travel via Finland to the Swedish capital of Stockholm. Oslo in Norway is another destination on the route, before the F-CELL World Drive takes the vehicles via Denmark and back to Germany again, where they will make stopovers in such cities as Hamburg. After 70 days of driving on a journey lasting 125 days, the tour will finally come to an end, back in Stuttgart again, at the beginning of June.