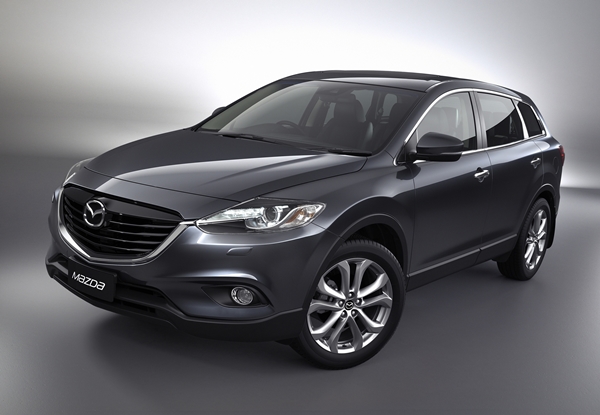 Mazda will have all hands on deck at the 2012 Australian International Motor Show with confirmation it will host the world premiere of its New-Look CX-9 crossover SUV as well as the Southern Hemisphere debut of the All-New Mazda6 sedan and wagon and the Australian reveal of the New-Look MX-5 roadster.

Announced earlier this week, the New-Look Mazda CX-9 will be unveiled to the world at the Sydney Convention & Exhibition Centre on October 18, ahead of its Australian launch later this year.

The New-Look CX-9 will be the latest vehicle in Mazda’s current line-up to feature its next generation design theme, ‘KODO – Soul of Motion’, which was on display at last year’s Australian International Motor Show in Melbourne.

“Mazda is sure to astound yet again at Sydney with the world premiere of the CX-9 and Southern Hemisphere debut of the All-New Mazda6, with both models featuring its newest styling and future design direction.”

Mazda’s range-topping SUV, the New-Look CX-9 features a distinctive sporty appearance with the newest design theme reflected on its front and rear for even sportier styling, a high-quality cabin, the flexibility of three rows and Mazda’s ‘Zoom-Zoom’ driving dynamics.

The New-Look CX-9 carries over the utility and dynamic driving performance of the current model, with the MZI 3.7 litre V6 engine and six-speed automatic transmission remaining, whilst now also featuring the latest in Mazda’s safety features and infotainment systems.

Also sharing the spotlight on Mazda’s stand at the Australian International Motor Show will be the All-New Mazda6 in its Southern Hemisphere debut.

The second of Mazda’s new generation of products to adopt the full range of SKYACTIV Technology and the Kodo – Soul of Motion design language, the All-New Mazda6 is also the first model to be equipped with Mazda’s unique brake energy regeneration system, i-ELOOP.

Capping off a sensational list of confirmed unveilings for this year’s Motor Show is the Australian reveal of the New-Look Mazda MX-5 roadster coupe.

With a number of exterior and interior upgrades as well as tweaks under the bonnet, the New-Look MX-5 is sure to continue its selling success as the world’s most popular open-top sports car.

Mazda will exhibit a total of 17 vehicles at the 2012 Australian International Motor Show and will occupy almost 1,000 square metres, in one of its largest local Motor Show displays ever.