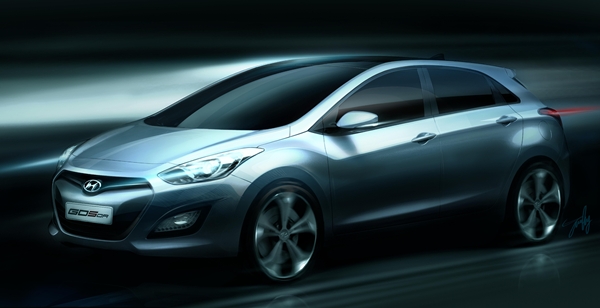 Hyundai Motor Company has released the first rendering of the next-generation i30, revealing an exciting new look for the company’s bestselling hatchback, set for its world premiere at the 2011 Frankfurt International Motor Show (IAA) in September.

The all-new i30 was designed and engineered at the Hyundai Motor Europe Technical Centre in Rüsselsheim, Germany and represents a further evolution of the unique form language, ‘fluidic sculpture’ – the company’s distinctive design DNA.

The ‘fluidic sculpture’ ethos utilises flowing lines inspired by nature and modern architecture to give a constant three-dimensional presence to Hyundai vehicles, and was introduced on the Hyundai ix-onic concept at the 2009 Geneva Motor Show. Since this debut, ‘fluidic sculpture’ has been the design language behind all new Hyundai models launched in Europe.

“When designing the all-new i30, we used strong, fluid lines to sculpt a car which looks athletic while exuding a sense of constant motion, even when stationary. From the rendering, you can see how we managed to give the car a bold stance, transmitting a confident attitude through sporty characteristics and dynamic proportions. In this way, the car is very close to the recently unveiled i40, and we want people to recognise the Hyundai design DNA on those two models,” commented Thomas Bürkle, Chief Designer at Hyundai Motor Europe Technical Centre.

The next-generation i30 is also recognisable thanks to Hyundai’s signature front face – the hexagonal shaped front grille.

“The hexagonal appearance is unique to Hyundai, with the jewel-like front headlamps which flank the grille adding a strong personality to the vehicle, as well as a sense of refinement and luxury,” Thomas Bürkle added.

“The next generation i30 will play an important role in continuing the development of the Hyundai brand in Australia,” said Oliver Mann, Hyundai Motor Company Australia’s Director of Marketing. “We launched the current i30 in late 2007 and since then the car has been recognised with numerous awards, including an Australia’s ‘Best Small Car’ award for three years running.”

Hyundai Motor Company Australia is pleased to introduce the i30 Fastback N Limited Edition, which is available to order until September 31 to a maximum of 500 units. [Read More]

The new generation i30 is the latest model in the Hyundai range to receive the maximum five-star safety rating, following the all-new Elantra and Accent, the i40 range, and the all-new Veloster. The new generation Hyundai i30 comes with a comprehensive suite of active and passive safety technologies as standard.
[Read More]