Hyundai Help  For Kids –  Yes, just as you no doubt feared, there is a chance that strong man Troy Conley will rip some of his teeth out while attempting to set a Guinness World Record by pulling five cars with his mouth to raise money for sick kids and yet, strangely, he sounds almost excited by the possibility. 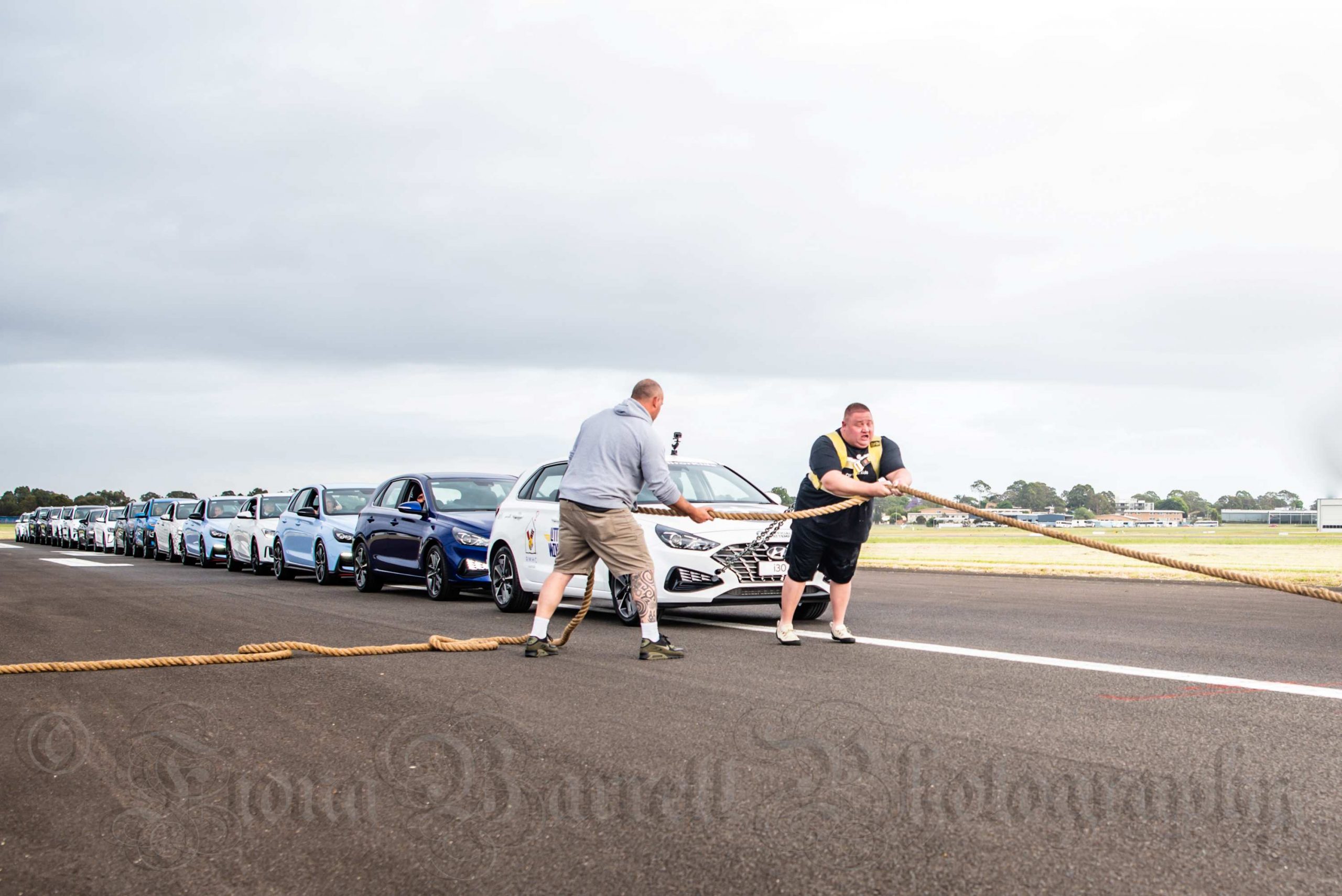 Overcoming adversity is what the big-hearted and even bigger chested Conley is all about and he’s been doing it since he was four years old, when he nearly died after rupturing a kidney. The medical help and kindness he received as a child has inspired him to work to raise money for charity organisations like Hyundai Help for Kids – the charitable arm of Hyundai Australia, which has raised $9.9m to help change the lives of children in need – and he does that in his own unique way, by constantly raising the bar for what the human body can do.

This year, on 17 November at Entertainment Park, next to Bankstown Airport, on Guinness World Record Day, he’s going to put your money where his mouth is by attempting to break the record for pulling cars with his teeth, plus a few more records, of course.

The crushing defeat he felt a year ago after attempting to set the World Record for pulling 16 cars the traditional, or easy way – using a rope and harness around his massive torso – might have crushed a lesser man. Unfortunately, one of the people sitting in one of the cars absent-mindedly left their foot on the brake and killed Troy’s effort to get momentum.

“It was tough at the time, but actually that foot-on-the-brake thing was the best thing that’s happened to me, it was a sliding-door moment because if that didn’t happen I would have got the record, we would have raised a bit of money and that was it, but because I missed it that’s inspired me to do some really crazy stuff, to explore the real showman side of the strong man thing, the spectacle, and to raise a lot more money, and attention, by pulling things with my teeth,” he explains.

Troy says that what inspired him to think he could push his body, and his mouth in particular, even further was a young girl called Ava, who attended his failed attempt last year. He kept his eyes focused on hers as he pushed himself, in vain, to pull those cars. 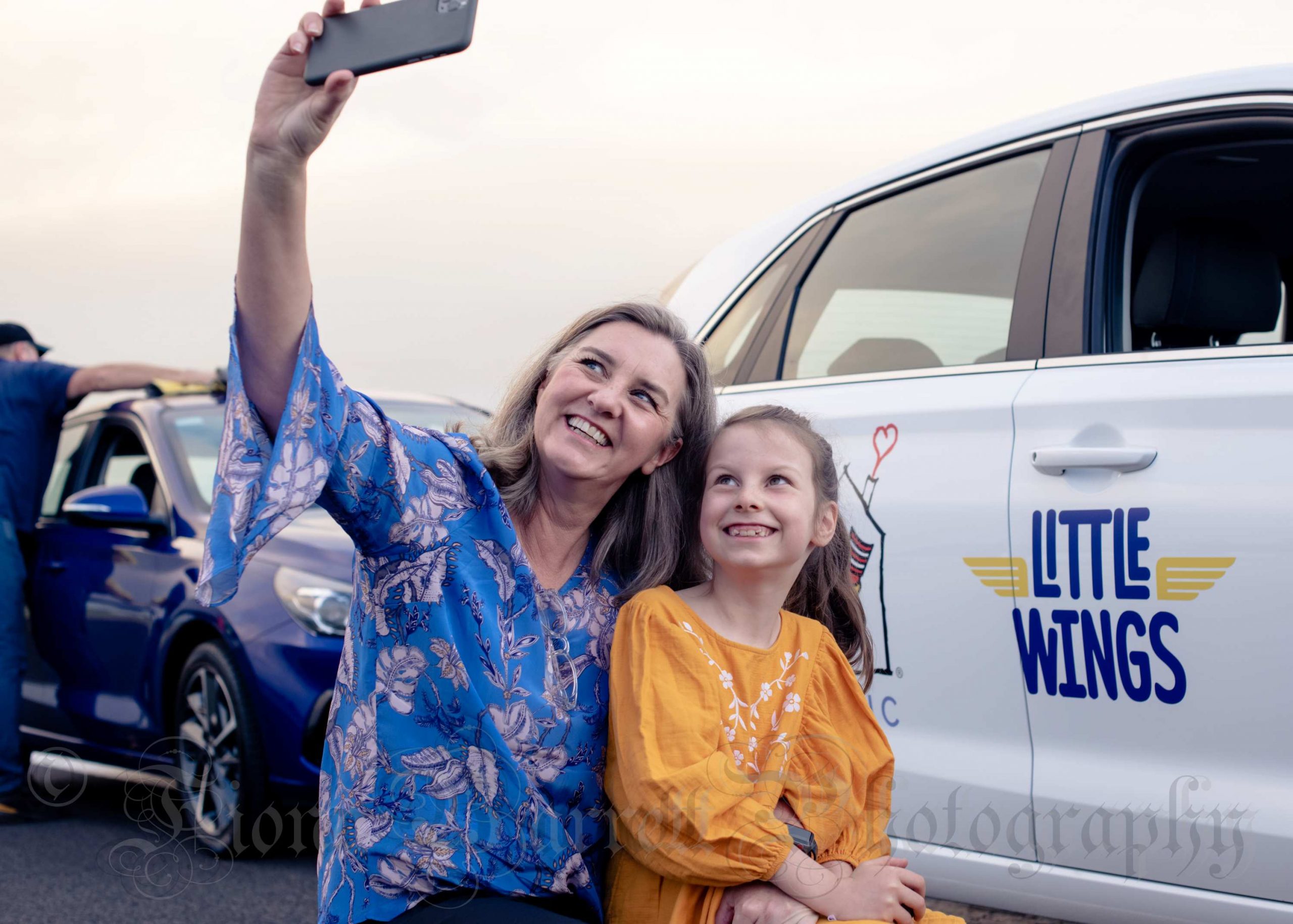 Ava was a typical bubbly and happy three-year-old girl, living in western NSW when she was diagnosed with acute lymphoblastic leukaemia, which was found to be in 98 per cent of her bone marrow. Alongside the doctors and the oncology wards, her treatment was made possible by Little Wings, a not-for-profit organisation that provides equal healthcare opportunities for sick children in rural NSW by providing free, professional and safe flight and ground transport services for those who need to attend hospitals in major cities.

“After the attempt, I got a message from Ava’s mum, Kath, later that day, thanking me for what I’d been doing and saying that it was the first time in five years that she’d seen that sparkle in Ava’s eyes, and that she’d said to her mum that ‘if Troy was sick when he was a kid and he grew up to do that, then I really can do anything’, and I just started crying, happy tears,” Troy recalls. “And that was it, I just said I’m not going to give up, and I’m not going to stop at raising $30,000, we’re going for $60,000, or more.”

Troy decided he needed to do something a little bit “quirky”, something not seen in this country – perhaps unsurprisingly – since the 1930s, and that was pulling things with his teeth. He’d never tried it before, which makes you wonder, surely, if things went slightly wrong, wasn’t he worried his teeth might fly out?

Bizarrely he says “well yes, and no”. “You could lose teeth, definitely, and the only rule my wife has is that she’s cool, she’ll support me to do it, but if I lose any teeth I have to get them replaced, because she didn’t marry a man with no teeth, and she really couldn’t bring herself to watch the first few times I did it,” he chuckles. “Yes, you are a bit concerned that your teeth will come out but what I’ve learned is that, mentally, you’ve just got to not think about losing the teeth, you’ve just got to back yourself. “And it’s funny, as soon as the rope is between your teeth you know whether it’s going to happen or not. It either feels good or it doesn’t and you’ve got to know when to drop it and walk away.”

Troy describes his preparation for teeth pulling, rather than pulling teeth, as “nerve wracking”, and says that his training – which involves wrapping towels around giant dumbbells at the gym and then lifting those towels with his mouth – gets him a lot of baffled looks. The trick is that while he’s holding the rope with his teeth, most of the strength comes from his hamstrings, lower back and shoulders, and in his case, those are very strong indeed. He’s also keen to swap “jaw stories” with an Australian army nutter he’s heard about who chews leather to strengthen his mouth muscles.

After a year in which he’s pulled, and pushed, all kinds of things, including a monster truck, a bus, a plane and, most recently, a 45-tonne Kenworth B-double belonging to the Team 18 guys from Supercars racing, with his teeth, Troy is feeling super confident about this big Guinness World Record attempt on 17 November at Entertainment Park (he already set one Guinness World Record this year, back in May, for “the heaviest vehicle pushed over 100 feet – an 11,770 kg truck).

“To break the record for most cars pulled with teeth I need to do more than five, but depending how I’m feeling I might go nine or 10 – you don’t want to make it too easy for the next person to come along and beat your record,” he points out.

Troy will also be having another go at the record that beat him last year, pulling 16 cars by rope and harness, but this time there will no humans in the vehicles, all supplied by Hyundai Australia. 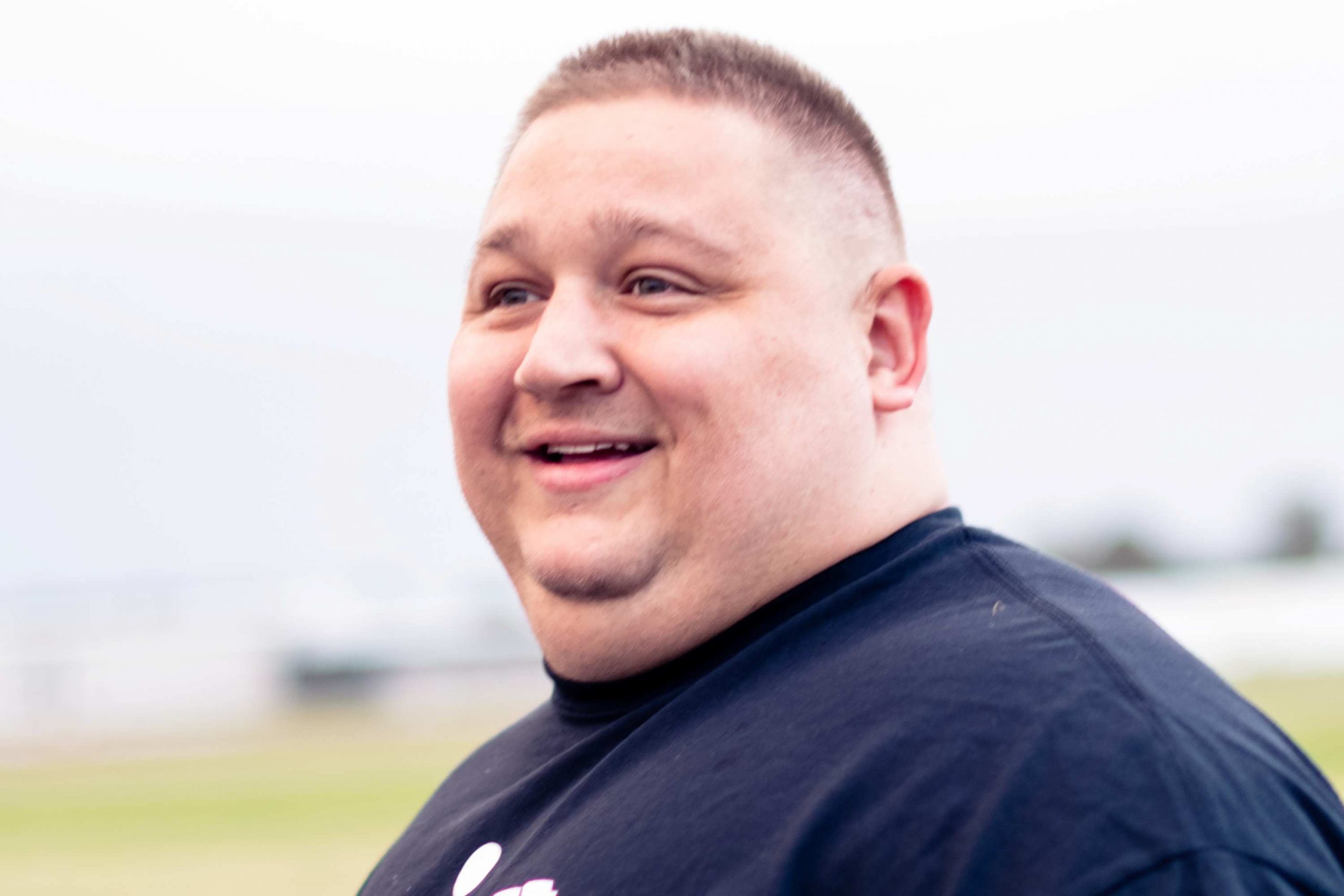 Troy doing it for the Kids

There will, however, be some very special people coming along to watch, and to provide inspiration for Troy and his fund-raising efforts – Zac Minty, 10, and his mum, Rebecca.

At the age of eight, Zac was diagnosed with a form of tissue cancer you’ve probably never heard of and one that seems hard to imagine, which compromised one of his eyes, and the skin around the socket. His treatment required weekly trips to The Children’s Hospital at Westmead, in Sydney from his family’s home in Canberra – with the help of Little Wings, which flies sick kids in need to hospital – and some lengthy stays at Ronald McDonald House.

Late last year, it was decided that Zac would need to lose his eye, which then led to months of recovery and radiotherapy. Throughout it all, Zac has remained a beacon of positivity, and has done everything he can to educate others on the unimaginable journey a child goes through when fighting cancer.

Zac will be cheering Troy on as he attempts to do something unimaginable to most of us as well.

Troy Conley’s GoFundMe page, which you can find here and which is raising money for Hyundai Help for Kids partners; Little Wings, Sydney Children’s Hospitals Foundation and Ronald McDonald House Charities Australia has remained open since last year and has already far exceeded the original $30,000 target. It stands at almost $48,000 and the hope is that it can reach $60,000 or even $90,000 with enough media and public support. 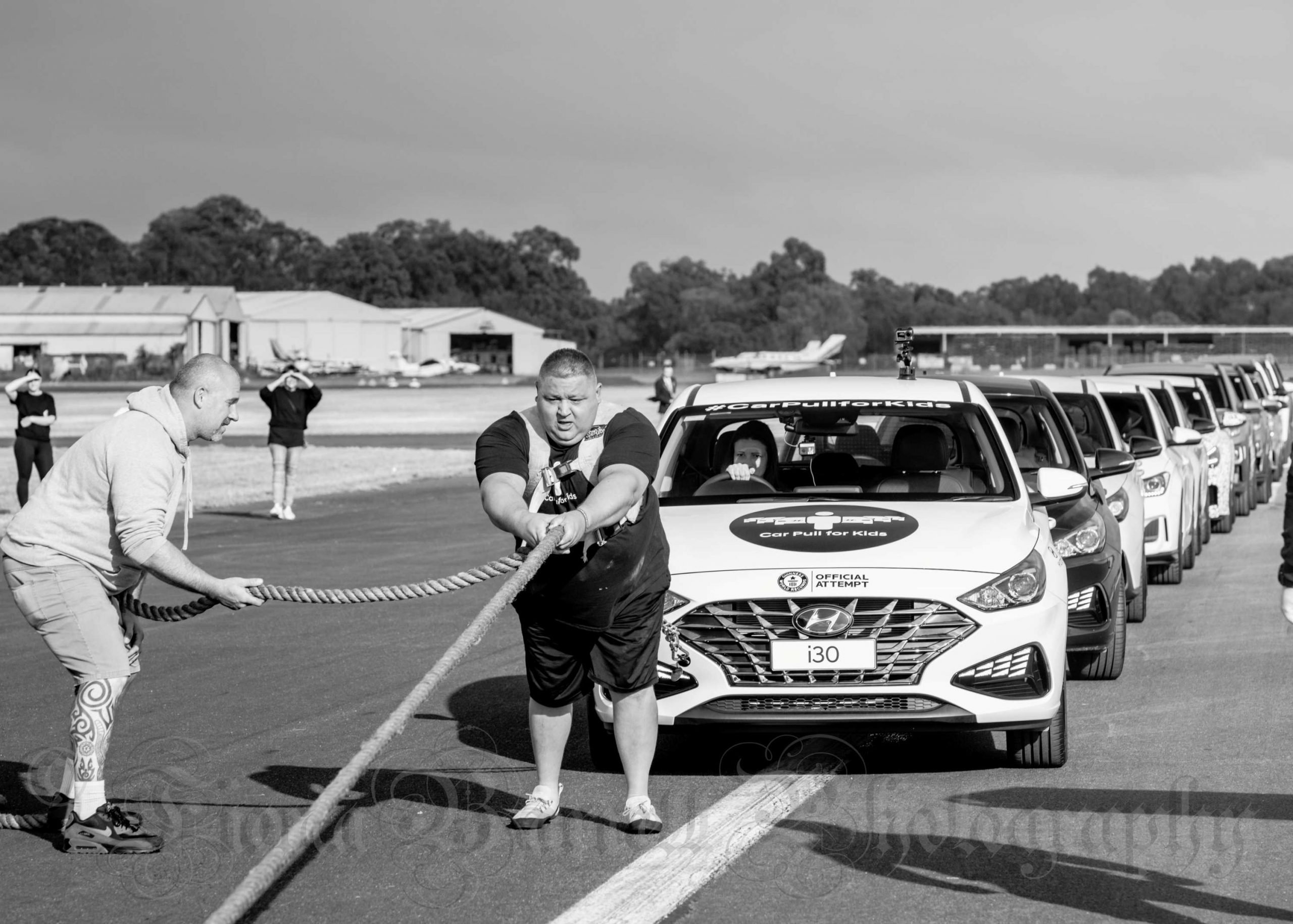 It really is the kind of good cause you can sink your teeth into, or Troy’s teeth at least.

Car Pull for Kids 2.0 with Strongman Troy Conley will take place on Wednesday 17th November at Entertainment Park, Bankstown 9am to 11am.

About Hyundai Help for Kids

Hyundai Help for Kids is the charitable arm of Hyundai Australia’s dedicated corporate social responsibility program and has been changing the lives of children in need, and their families, since its inception in 2014.

It is a joint initiative of Hyundai Motor Company Australia and the 160+ strong Hyundai National Dealer Network, whereby a contribution from every new vehicle sold goes towards assisting children and their families in areas of medical, community and vehicle assistance with contributions totaling more than $9.9 million to date.

Hello and welcome to Overdrive, where we stay at home and luxuriate in our dreams of cars and transport. Lets start with the news.  [Read More]

As 100 percent of the photovoltaic plant at Asan will be built on existing rooftops, the construction neither requires any additional land nor causes environmental issues. The choice of the Asan plant is appropriate, as Asan manufactures the eco-friendly Hyundai Sonata Hybrid, as well as i45/Sonata and Grandeur/Azera. [Read More]