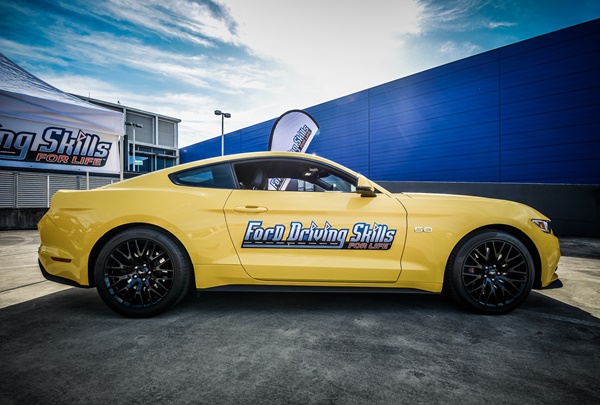 Ford has today announced that its Driving Skills for Life (DSFL) program will tour Australia for a third year. DSFL’s primary goal is to help train young and new drivers, some of the highest risk motorists on our roads, and this year will incorporate new training and education to address pedestrians and cyclists in a bid to reduce the national road toll through better education

The program will take place in five Australian cities in 2017 and will educate hundreds of young Australians about the importance of sharing the road, while providing unique training that offers skills and information that isn’t currently provided to young and new drivers.

For the first time, Driving Skills for Life will incorporate pedestrian and cyclist awareness training. With 15% of all deaths on Australian roads in 2016 – 2017 (12 months to July)[2] being cyclists and pedestrians, and with no specialty training being provided to young drivers, Ford Australia is hoping to close this gap through its updated education program.

With 3.6 million or 17% of Australians riding a bike each week, and 5.1% of commuting workers choosing to cycle[3], it has never been more important to provide bespoke training adapted for our local roads. We are seeing the rise of bike sharing services in major cities, putting more cyclists on the roads in high pedestrian areas. Couple this with busy CBD traffic and distracted drivers, there is even more of a need for thorough driving education.

“We are very excited to continue our support for Ford Australia’s Driving Skills for Life Program, which returns for its third year in 2017. Instilling safe driving skills in young drivers is crucial while they are still learning as it sets them up with sound driving skills for life. Pedestrian and cycling training is a fantastic addition to the program as it educates young drivers about the responsibility and importance of sharing the road,” says Dianne Giblin AM, CEO, ACSSO.

While Australia has seen a decrease in driver deaths on the roads in the past year, pedestrian deaths rose 4.9%[4]. Further to this, there was a 7% increase in 2016, revealing a shocking trend of 336 pedestrians losing their lives since 2015.

“We welcome Ford’s Driving Skills for Life initiative as it emphasizes that safe driving is founded on ‘knowledge, skills and behaviour’ – two out of three is unacceptable. Drivers and pedestrians alike must apply 100% concentration when sharing our roads. RESPECT is a key attribute – Respect for self, Respect for passengers and Respect for other road users – safety for all,’ said Dr Ray Shuey, Victorian Director of the Pedestrian Council of Australia [5]and international road safety specialist.

Ford research has identified four key areas– hazard recognition, vehicle handling, distracted and impaired driving, space and speed management – in which young drivers lack skills and education. The DSFL program has been specially designed to address each of these through hands-on driver training.

The Driving Skills for Life program provides education to new drivers to assist with keeping the road toll down. Road and traffic deaths are still the second-highest cause of death for Australians aged 15 – 24, and within this group, the leading killer of young males. For the regular Australian, the average number of road deaths per 100,000 people is 5.37, but for the young adult age bracket, it is nearly double this and currently sits at 9.0[6], with the number for men in this age bracket being an alarming 13.4 (2.5 times the national average). For Indigenous Australians, this alarming figure ranges from 20 to 25 per 100,000.

For the first time, this year’s program will be offered to young drivers in country New South Wales, Victoria and in the Northern Territory where the injury death rate for Indigenous drivers is five times greater than for non-Indigenous youths[7]. Ford’s first session will be in Darwin on 7th October, providing advanced driving education to a new audience.

“We are very pleased to expand our Driving Skills for Life in 2017 to support into regional and indigenous communities,” said Graeme Whickman, president and CEO, Ford Australia. “While there continues to be a strong national focus on protecting young Australian drivers, research shows that this demographic is still the most hazardous on Australian roads. We also know that with the growing number of cyclists on the roads and with the unfortunate rise of pedestrian deaths, the programs focus on cyclist and pedestrian education that Driving Skills for Life will bring is much needed Australia-wide.”

“We applaud Ford Australia’s Driving Skills for Life course as we unfortunately have experienced far too many fatalities on our roads in remote and regional area’s across the Northern Territory. Providing driver safety programs to new drivers is critical in keeping our roads safe, and ensuring that we prevent the senseless loss of lives of young people. Safety driving programs such as this also ensure that our young people have a healthy respect for driving and sharing the road, whilst being better equipped to be a safer driver. The Balunu Foundation is a proud supporter of this initiative as we too strive to reduce the high rates of road fatalities in the Northern Territory,” says David Cole, Founding Director at Balunu Foundation.

Driving Skills for Life will be a free ticketed event and numbers are limited in each city. Registrations are now open at  www.FordDSFL.com.au and tickets will be allocated in order of registration.

The program builds on the company’s leading automotive investment in Australia.

In December 2016, Ford announced an increased Australian R&D investment by 50 percent to $450 million in 2017 to support increased vehicle development programs. By this year, Ford will have a 2,000 person strong team in Australia, including 1750 engineers, designers and technicians.

As part of this investment, Ford transformed its iconic head office in Melbourne into The Asia Pacific Product Development Centre, which features state-of-the-art virtual design and engineering capability, and will be the centrepiece of Australia’s most advanced automotive development campus. The centre positions Ford as the automaker with the most comprehensive capability to design and engineer vehicles in Australia.

Ford is also increasing its commitment to helping develop the next generation of engineers and designers. Ford recently raised $300,000 to expand student robotics programs in Broadmeadows and Geelong partner schools. Ford engineers personally mentor students in these Science, Technology, Engineering, Arts and Maths (STEAM) programs to develop and program robots for competition around the world.

Ford is aggressively accelerating its commitment to wirelessly connected intelligent vehicles. Known as vehicle-to-vehicle communications, the company is the one of the first carmakers to build prototype vehicles for demonstrations across the United States this year.