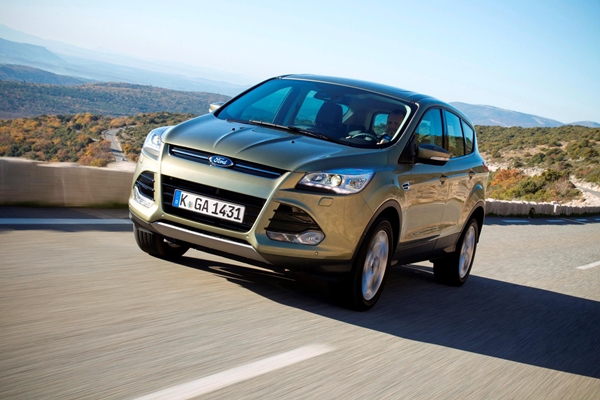 As the most technologically advanced Ford vehicle to be sold in Australia, the Ford Kuga combines contemporary styling with smart features like SYNC connectivity, intelligent all-wheel drive, a host of advanced safety features – including Emergency Assistance – and cutting-edge Ford EcoBoost engines.

With a focus on a fun, safe and rewarding driving experience, customers will be able to choose from an expanded Ford Kuga range that includes three models – the stylish Ambiente, mid-range Trend and range-topping Titanium.

Ford Australia General Manager, Marketing, David Katic, said customers were asking for a smart utility vehicle that not only connected with their lifestyles but answered their every day needs.

“The all-new Ford Kuga delivers this in spades,” Katic said. “We put more smart stuff in, so our customers can get more fun stuff out. It is by far the most advanced compact SUV Ford has ever developed.”

The newest member of Ford’s SUV family is the first Ford to have an EcoBoost engine standard, complemented by a proven Duratorq turbo-diesel.

The 1.6-litre EcoBoost petrol engine will be available with a six-speed SelectShift automatic while the 2.0-litre diesel will have a standard six-speed Powershift automatic.

“We will be pitching the newcomer with a sub-$30,000 entry point, which we expect will hit a sweet spot for buyers,” Katic said.

The Ford Kuga was shown to the public for the first time at last year’s Australian International Motor Show in Sydney and the response was fantastic, he said. Ford attracted more than 8000 people to its “Smart Drive” event and more than 3000 people saw the Ford Kuga’s segment-first ‘open sesame’ tailgate in action.

“We had a great response from families, who were able to experience the hands-free function of the ‘open sesame’ rear door,” Katic said.

“They also loved the styling, roomy interior and luggage area.”

The hands-free automatic tailgate allows customers to open or close the rear tailgate by simply sweeping a foot under the rear bumper.

Using similar motion technology found in many video game systems, a gentle kicking motion under the centre of the rear bumper activates, unlocks and raises the tailgate when the driver has the Ford Kuga key fob. This allows quick and easy access to the luggage area without needing to set down packages or dig out keys. The same process closes the hatch.

The new Ford Kuga is the centrepiece of Ford’s strategy to expand into one of the fastest-growing Australian SUV segments by offering a surprising array of features and technologies, including:

The Ford SYNC Emergency Assistance system uses the driver’s own mobile phone and runs in the background once the phone is properly paired with SYNC.

If the vehicle’s airbags are deployed, Emergency Assistance uses SYNC hands-free capabilities to connect the driver directly with an emergency service through the paired mobile phone.

Apart from Emergency Assistance, the SUV’s sophisticated Intelligent All-Wheel Drive system can pre-emptively assess road conditions 20 times faster than it takes to blink an eye, readjusting the all-wheel-drive power split to give the driver the best blend of handling and traction.

The primary goal of the AWD system at low speeds is traction; at speeds above 30 km/h the AWD system is tuned to improve driving feel, handling and responses. A unique cluster display shows drivers the torque demand of each wheel at any moment.

In addition to the intelligent AWD system, Ford Curve Control acts as a safeguard for drivers who have entered a bend with too much speed.

The system mitigates against severe understeer by aggressive braking and can, if the driver is still pushing their foot down on the accelerator, also reduce engine torque.

The new Ford Kuga will deliver exceptional fuel economy through significantly improved fuel efficiency from a powertrain line-up that, for the first time, includes EcoBoost engine technology as standard.

Apart from surefooted handling and an impressive engine line-up, Ford conducted more than 5,000 virtual and real-world crash tests to ensure the highest safety levels during the development of the all-new Ford Kuga.

More than 30 per cent of the body structure is made up of high and ultra-high strength steels.

This has resulted in the Ford Kuga being awarded a maximum five-star rating by both EuroNCAP and the Australian New Car Assessment Program (ANCAP).

When it comes to servicing costs, Ford Kuga customers will also have security and certainty with myFord Capped Price Service, which will be available on the entire range.

Further details and specific pricing will be announced closer to launch.

Well it certainly has the looks to attract the target market, The Kona looks chunky, not in a Jeep Renegade style but with more character than the Mitsubishi ASX, but less ‘style’ than the Toyota C-HR. [Read More]

Great car for a young coupe like ourselves. We enjoyed zipping around this, many trips to the beach, great fuel economy even in peak hour traffic in Sydney. Would recommend this car for not only every day to day driving but also holiday driving and road trips [Read More]

The Jeep Grand Cherokee has been awarded the maximum five-star safety rating after excelling in ANCAP’s crash-test program.The Grand Cherokee scored highly in all crash-test scenarios, including a perfect 16 out of 16 in ANCAP’s side-impact test. The impressive results, combined with its 60 available safety and security features, ensured the Grand Cherokee was awarded ANCAP’s highest rating. [Read More]