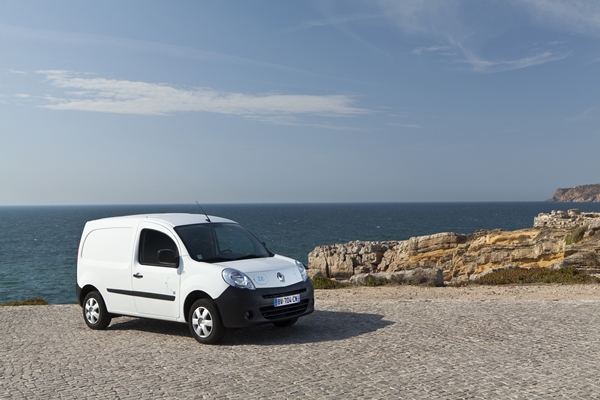 For the first time an electric vehicle has been voted the International Van of the Year by a jury of 22 European journalists specialising in light commercial vehicles.

The jury chose Kangoo Z.E. for its zero-emission* virtues, as well as for its practical and economical qualities.
Kangoo Z.E., launched in Europe in late October, has already picked up three awards. Along with International Van of the Year 2012, it has won prizes in Denmark and Ireland.
With 104 points out of a possible 168, Kangoo Z.E. has won the coveted International Van of the Year prize, beating the Iveco Daily, Fiat Ducato and VW Caddy. The award was presented to Jean-Marie Hurtiger, director of Renault’s Light Commercial Vehicle division, at the inaugural evening of the 14th International Trailer Show in Belgium.

Jury chairman Pieter Wieman explained: “With the Kangoo Z.E. Renault brings the electric van within the reach of the normal European van user,” he said, “thereby delivering a major contribution to environmental sustainability, one of the most important issues of the transport of goods by road nowadays.”

Commenting, Jean-Marie Hurtiger said: “This prize rewards the work of the people at Renault who have worked for several years on the Kangoo Z.E., one of Renault’s four electric vehicles. All of the company’s functions were involved in the adventure, including the design office, the Maubeuge plant and sales. They met the challenge in a remarkable manner, showing determination, creativity and, above all, an excellent team spirit that has now produced results.”

Renault, the European leader in light commercial vehicles (LCVs) since 1998, has extended its line-up with Kangoo Z.E., the electric version of Kangoo. It is the first full-electric van produced entirely in-house by a vehicle manufacturer.

By fitting the battery under the floor of Kangoo Z.E., Renault has kept the same load capacity and dimensions as the internal-combustion version. Kangoo Z.E. comes in two lengths and three versions, all of them produced at the MCA Maubeuge plant in France on the same line as its fuel-powered sister: Kangoo Z.E., Kangoo Z.E. Maxi two-seater, and Kangoo Z.E. Maxi five-seater. This diversity responds to the varied needs of professionals, with load volume ranging from 3 m3 to 4.6 m3 and goods and passenger transport both possible.

In France, electric vehicles boast extremely low well-to-wheel emissions, including emissions from the production of electricity. The total comes to only 12 g/km of CO2. For the Van of the Year jury, the fact that Kangoo Z.E. is mass produced contributes that much more to CO2 reductions.

Hello and welcome to Overdrive a program with an infatuation about trains, planes and automobiles. I’m David Brown [Read More]