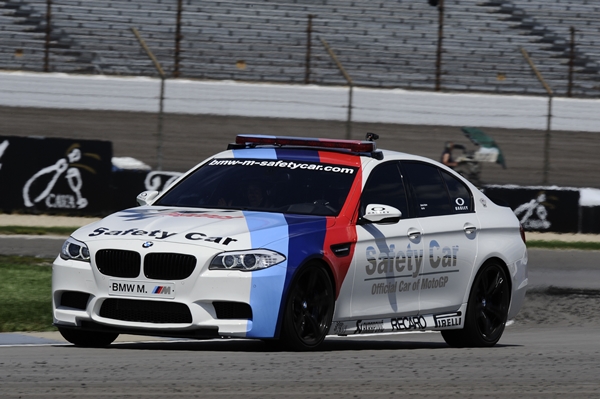 BMW Australia will partner the with Armor All Bathurst 12 Hour race organisers to provide a brand-new BMW M5 to serve as the official Safety Car of the February 24-26 Event.

The new model M5 goes on sale in Australia this month, corresponding perfectly with the timing of the increasingly international Bathurst season-starter.

For more than 25 years the BMW M5 Sedan has defined the high-performance Sedan segment, in the process becoming the most successful car of its type in the world. Now a new fifth-generation model raises the concept of the premium executive Sedan combining track-car dynamics and supreme touring comfort to an even higher level.

The M5 features the most powerful series production engine ever in a BMW M car, yet has 30 percent better fuel consumption than the existing model. Capable of sprinting to 100km/hr in just 4.3 seconds, the M5 boasts race-bred chassis technology that includes, for the first time, an Active M differential.

The M5 Safety Car features several modifications including an Akrapovic titanium prototype exhaust from the catalyst back as well as KW Clubsport suspension completing the race-ready package.

Piers Scott, BMW Group Australia Head of Corporate Communications, said the new BMW M5 spent more time in development on the world-famous Nurburgring than any other BMW M car in history and is at home on the world’s most demanding racetracks.

“The Armor All Bathurst 12 Hour features its most exotic field yet this year and BMW Australia is looking forward to having the brand new M5 leading the way when it is required,” said Mr Scott.

“The performance and technology within the new BMW M5 matches up well with the cars competing in the race itself. The fact there is live TV and continual internet coverage means it is an effective way to showcase the new vehicle.

“BMW has a fantastic heritage of racing at Mount Panorama and we are pleased to continue that by providing the Safety Car vehicle this year and getting some more laps in front at Bathurst.”

Event Director James O’Brien said the presence of a major brand like BMW would further showcase the Armor All Bathurst 12 hour product to the world.

“We are very proud to have BMW on board to provide our Safety Car this year,” Event Director James O’Brien said.

“The timing of the Armor All Bathurst 12 Hour and the launch of the new M5 offered BMW Australia an ideal opportunity to showcase their new model at Australia’s most spectacular race track and in front of an international field and audience.

“Bathurst always throws up the unknown and safety car periods are almost a certainty. We’re certainly looking forward to having the new M5 lead the pack this year across the Event weekend.”

The BMW Group
The BMW Group is one of the most successful manufacturers of automobiles and motorcycles in the world with its BMW, MINI, Husqvarna Motorcycles and Rolls-Royce brands. As a global company, the BMW Group operates 25 production and assembly facilities in 14 countries and has a global sales network in more than 140 countries.

The success of the BMW Group has always been built on long-term thinking and responsible action. The company has therefore established ecological and social sustainability throughout the value chain, comprehensive product responsibility and a clear commitment to conserving resources as an integral part of its strategy. As a result of its efforts, the BMW Group has been ranked industry leader in the Dow Jones Sustainability Indexes for the last seven years.

Audi R8 LMS to Defend its Title at Bathurst

The Audi R8 LMS will compete at the 12-hour race at Bathurst on February 26 as the title defender. Audi customer sport celebrated a one-two result on the legendary Australian race track at the beginning of the 2011 season. [Read More]

Brabham Automotive was established by David Brabham, the youngest of Sir Jack’s three sons, with the aim of building “the world’s most track-focused hypercar”. [Read More]