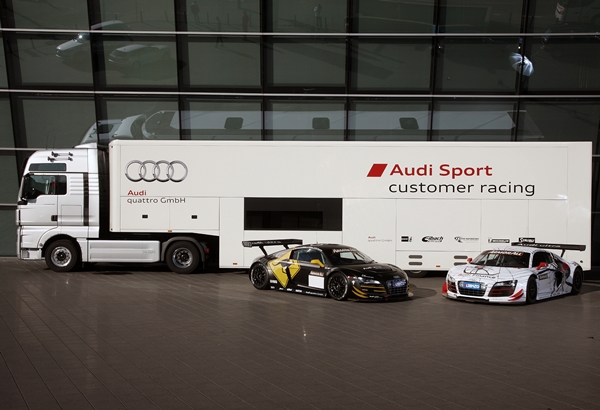 The Audi R8 LMS will compete at the 12-hour race at Bathurst on February 26 as the title defender. Audi customer sport celebrated a one-two result on the legendary Australian race track at the beginning of the 2011 season. This year, Team Phoenix Racing as well is set on battling for overall victory with two R8 LMS cars – and the two race cars fielded by the DTM-winning team from the Eifel are causing a stir even before the event.

A kangaroo and a spider: The two Audi R8 LMS from Phoenix Racing unmistakably stand for Australia’s wildlife. The black GT3 race car designated as number “1” displays the typical yellow road sign with the marsupial on its flanks. And the graphics of the white number “2” show a Redback spider and its web. This brings back fond memories to Audi fans.

The entertaining exterior though is not designed to – and should not – mislead anyone about the high ambitions pursued by the run as two prominent driver teams supported by Audi Sport customer racing – Audi’s customer sport department – and Audi Australia are to drive for overall victory yet again. Like last year, the home round to the Australian trio is about fighting for a great honor. Mark Eddy, the current Australian GT Champion in the Audi R8 LMS, is sharing the cockpit of car number “2” with Australia’s touring car legend, the three-time V8 Supercar Champion Craig Lowndes, and Warren Luff. Lowndes set the fastest race lap last year in the Audi R8 LMS, Luff achieved the fastest time in qualifying.

Two of the three winners from last year – the German Christopher Mies and Darryl O’Young from Hong Kong – are at the wheel of car number “1.” Their new teammate Christer Jöns (Germany) is making his debut in Australia.

For Phoenix Racing, the fifth continent is new territory as well whereas the field of “endurance racing” is not. The German team proved its marathon qualities by achieving two overall victories at the Nürburgring 24 Hours and one at the Spa 24 Hours as well as numerous other podium places and class victories. In addition, Ernst Moser’s squad that has been part of the program from day one and a longstanding partner of quattro GmbH knows the R8 LMS inside and out.

Romolo Liebchen, Head of Audi Sport customer racing: “The Australian market is very important for Audi. In view of this, we are very happy to be able to compete and make our mark at this prestigious race.”

Phoenix Racing is meeting strong rivals in the GT3 class at Bathurst. A total of 33 cars will be on the grid, including an Audi R8 LMS from United Autosports. The Anglo-American customer sport team is competing for the first time with the native South African Mark Patterson, the Franco-Chinese Alain Li and Frank Yu from Hong Kong at the 12-hour race.

For the fans and the drivers, the 6.213-kilometer race track at Mount Panorama is a dream. The roller-coaster circuit features a 170-meter vertical difference, includes 23 turns, makes for high suspense with its unusual radii and barriers close to the track and is considered the home of Australian motorsport. It is also the venue of the annual Bathurst 1000 race which Craig Lowndes has decided in his favor as many as five times.

Fans around the world can watch the qualifying sessions and the race via live streaming provided by the organizer at www.audi.tv.

Topics of the weekend

Will the Audi R8 LMS manage to repeat its 2011 victory?
Will the Australian trio prevail this year?
How will the Audi R8 LMS fare against the GT3 competition?
Quotes by the officials
Ernst Moser (Team Director Phoenix Racing)
“Our team has never run in Australia before. In addition, February as the first month of racing is very early as we normally just test at this time of year. Obviously, such a special track as Bathurst suggests a comparison with the Nürburgring Nordschleife.

Bathurst has high vertical differences. The circuit with its barriers close to the track is very difficult to drive. Since the Audi R8 LMS celebrated a one-two result last year it is only natural that there are certain expectations this year. Mercedes and Ferrari will be tough rivals for us. We’ve got to be sure not to make any mistakes. quattro GmbH with its experiences from last year helped us a great deal to prepare for the event. Five of the six drivers know the track and as a team we’re intimately familiar with the Audi R8 LMS and are also at home in endurance racing. We’re reinforced by four employees from Australia who are joining our team via Mark Eddy. I’m very excited. It remains to be seen which Michelin tire compounds we’ll be allowed to use.”

Won the Australian GT Championship in the Audi R8 LMS last year
Started from pole position at Bathurst in 2011
Is sharing the cockpit in this year’s Australian GT Championship with
Warren Luff
“Last year we had a nice battle between the two Audi R8 LMS. It was an exciting race all the way to the end. The car was very reliable and fast. It felt good on a wet and dry track and was easy to drive! We three Australians would now like to finish one place farther in front after the close outcome last year. But this year the competition with the international teams and even more makes in the field is even tougher.”

Has known the Audi R8 LMS since 2010
Is the only one of the six drivers to have never competed at Bathurst before
Is arriving a week earlier in order to get used to the climate and time zone
“I’m proud to be driving an Audi with Phoenix on the other side of the world! I don’t know Bathurst in real terms yet. But I’m familiar with the track from the PlayStation. Ever since my first virtual laps on this track I’ve been thrilled with Bathurst. Now the time has come for me to actually compete in the Audi R8 LMS, my absolute favorite. A dream is coming true! After three years the Audi R8 LMS is an advanced and stable car. The cornering dynamics and powerful brakes in particular will give us advantages on this winding track. I’m very excited about Australia. Our preparations in terms of track knowledge using onboard videos and our fitness training are running at full stretch. Hopefully we’ll manage to defend the
title on my first run at this event.”

Drove the fastest race lap at Bathurst last year
Started from the front position last year
“I’m happy to be returning to Bathurst with an Audi and fighting for victory again. The battle with our team-mates a year ago was fantastic. Our driver team only missed victory by a very small margin. It’ll be great to work with Warren and Mark again. The fact that we’ve driven together before is a great help. Perhaps that’ll put us ahead of the competition a bit. I’m also looking forward to the Audi R8 LMS. The car is wonderful. On a track like Bathurst, it seems like it’s exactly made for the winding sections up on the hill. The R8 LMS is a good-natured car. It allows you to run your stints in a gentle and consistent way. The competition will even be a lot tougher this year. But it’s not a sprint. You’ve got be in contention at the end. I’m expecting good chances for the three of us being able to make that happen.”

Achieved the best time in qualifying last year
Contested a race on the Nürburgring in the R8 LMS in May of 2011
“This year the Bathurst 12 Hours will be a much tougher battle than last year. I’m expecting us to have particularly strong rivals in the Ferrari 458 and the Mercedes SLS and a thrilling fight all the way to the end. But I expect our strongest opponents to be in our own team again. And I’m particularly looking forward to the updated version of the Audi R8 LMS. I’m excited to see how it’ll feel at Bathurst.”

As 2009 FIA GT European Champion was among the first title winners in the Audi R8 LMS
Was already driving for Ernst Moser’s team back then
Is returning to Bathurst as last year’s winner
“After the successful race last year I’m happy to be able to run again. Bathurst is always worth a visit, the country and the track are unique. The Audi was the strongest car in the field last year. quattro GmbH has continued to develop it during the season. I believe that with the Audi R8 LMS and Team Phoenix Racing we’re the strongest pairing. Yet our rivals should not be underrated. The competition is becoming bigger and tougher. Our strongest opponents will likely come from our own ranks though – our Australian team-mates. Last year, they finished barely a second behind us. So that means we’ve got to give everything throughout the 12 hours.”

After runs at Bathurst, the Nürburgring and Sepang has long become an expert in the Audi R8 LMS
Is returning to Bathurst as last year’s winner
Was nominated for the Hong Kong Sports Star Awards in January 2012
“Last year we had a sensational race in the battle with our Australian team-mates. But this year we’ll have additional competitors with various makes. The Audi R8 LMS is particularly strong on the fast sections on the hill and in the braking zones. The car can display its strengths really well on this circuit. The R8 LMS is pleasant to drive, which helps on a challenging track like Mount Panorama. I met our new teammate Christer Jöns at the Audi Sport Finale in Germany in 2011. The chemistry between us three drivers was great from the outset. And I’m looking forward to Phoenix Racing. I once drove for the squad in the DTM. We’ve got all the key elements to be in contention for victory again.”

Warren Luff about Bathurst: “Bathurst is a very special race track, naturally that’s the way we Australians feel about it too. Even though the track is a public road when no races are run it is a permanent circuit. It is very fast and forgives no mistakes. The high vertical differences are typical for Bathurst. Last year we saw that the Audi R8 LMS is a perfect fit for the challenges at Mount Panorama. Its excellent aerodynamic balance is the key to good lap times.”

BMW Australia will partner the with Armor All Bathurst 12 Hour race organisers to provide a brand-new BMW M5 to serve as the official Safety Car of the February 24-26 Event. [Read More]