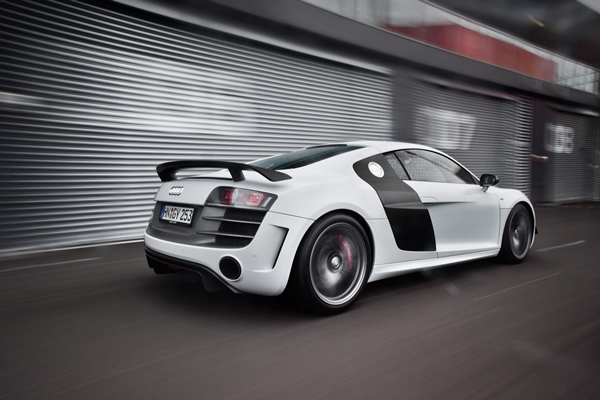 Do you want the sports car experience? Well maybe the Audi R8 GT is for you. It has just been named the Sports Car of the Year 2011 in the category “Production Supercars” by the German magazine AutoBild SportsCars.

This year marked the 10th time that a jury from the trade journal has awarded the coveted prize, which was presented at the Essen Motor Show.

Stephan Reil, Head of Development at quattro GmbH, accepted the award for the Audi R8 GT before some 450 invited guests. 70,976 readers of the magazine took part in this year’s anniversary voting for “Sports Car of the Year 2011.”

The Audi subsidiary, quattro GmbH, is responsible for the development and production of the Audi high-performance sports car. Its 5.2-litre V10 engine produces 412 kW, while engineers have reduced the weight of the Audi R8 GT by another 100 kg compared with the R8 5.2 FSI quattro. As a result, the car responds superbly to the driver’s inputs, with excellent dynamics and sensational cornering grip. The car accelerates from zero to 100 km/h in 3.6 seconds and reaches a top speed of 320 km/h. Its average ECE fuel consumption is just 13.9 litres per 100 km.

Hyundai’s Veloster will be available in the future with a 1.6 litre turbo engine. This will join the already confirmed naturally aspirated 1.6-litre petrol engine in the innovative Hyundai Veloster coupe line-up. [Read More]

Holden has broadened the appeal of its Aussie built Series II Cruze range with the launch of the new SRi and SRi-V models. [Read More]

Audi RSQ8. Audi Australia is bolstering its iconic Q family with the arrival of the first-ever RS Q8 performance SUV. The most powerful SUV in the Audi range combines crushing performance with expressive design, [Read More]