With all the hoohaa about alternative energy sources for cars We have the usual suspects  like electric cars, plug in Hybrid Electric, Hybrids, Hydrogen and even solar. But what if you could run  a car on fresh air.

That’s right there is a car that runs on compressed air. That solves a heap of problems and logistic issues.

After all currently air is free and everywhere isn’t it. Well is it really that easy? Well there is a company called Zero Pollution Motors that is producing an air powered car called the AIRPOD.

How can compressed air fuel a car?  The laws of physics dictate that uncontained gases will fill any given space. The easiest way to see this in action is to inflate a balloon. The elastic skin of the balloon holds the air tightly inside, but the moment you use a pin to create a hole in the balloon’s surface, the air expands outward with so much energy that the balloon explodes. Compressing a gas into a small space is a way to store energy. When the gas expands again, that energy is released to do work. This principle is the basis behind what makes an air car run.

Due to the operating costs and ease of use of the vehicle, the compressed air car is a disruptive technology that addresses one of the issues of electric cars, which is the charging time. In the case of compressed air, the car can be refilled like a gasoline car by transferring compressed air from a compressed air station, similar to the one that exists today at the gas station for the fill up the tires but with larger capacity and pressure in order to refill the vehicles.

The AIRPod vehicle, developed by MDI (www.mdi.lu), is the solution to urban pollution and urban mobility.  With its small size, a tiny price, zero pollution, and a fun and futuristic design, AIRPod marks a turning point in the range of urban vehicles.   It is a real breath of fresh air in cities and the prelude to travel without pollution. 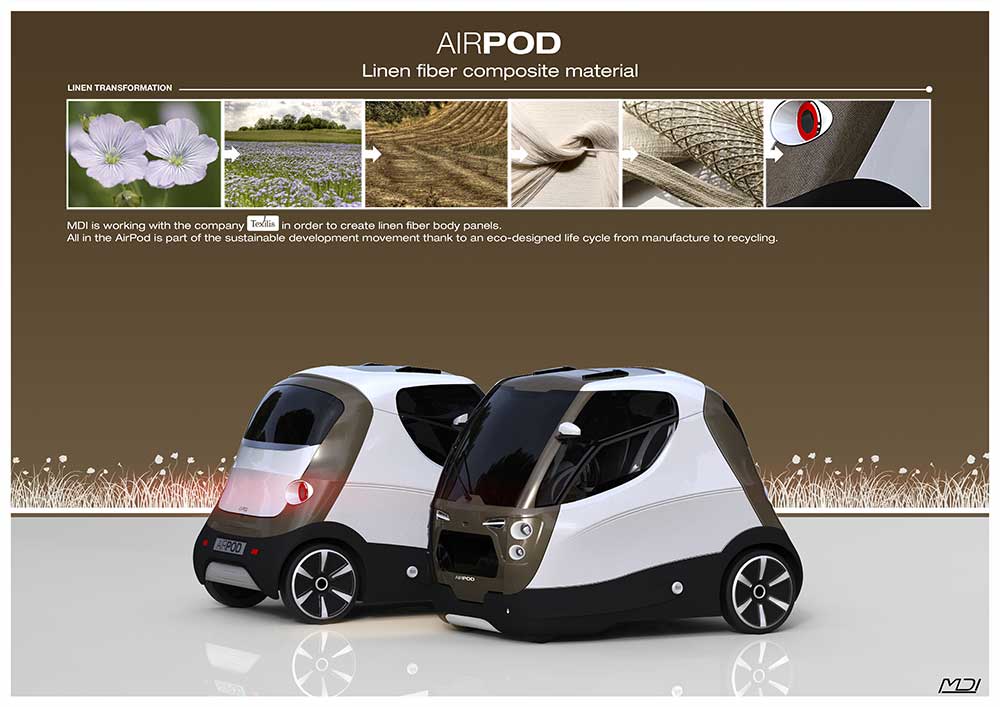 The company is also following environmental philosophies and eco design from manufacture to recycling.

Its an interesting concept that may prove to be a paradigm shift in the automotive industry and end the arguments surrounding electric cars for ever.