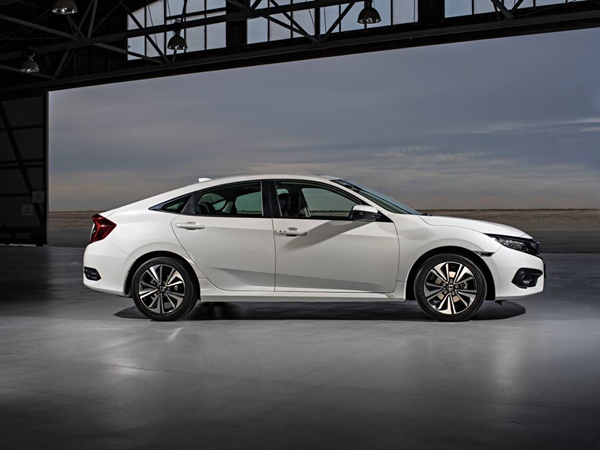 The sedan is the best looking of the range, don’t you think?

The front of the car is shared between the two. The B pillar back is where the cnages happen. The sedan has a slightly longer rear to accommodate the boot, with similarly shapely LED tail lights.

We’ve covered the Civic thoroughly, so I’d like to concentrate on how the sedan drives, and the tech inclusions in this review.

For a decade, Honda fell behind the market. First, the GFC, the tsunami in Japan, and floods in Thailand, all but crippled production and development. It stripped Honda of cash for research.

It could have been enough to cripple the Japanese auto maker, instead, Honda pressed on.

Brand loyalty, and continued quality manufacture, played a big part in the being able to weather the storm. 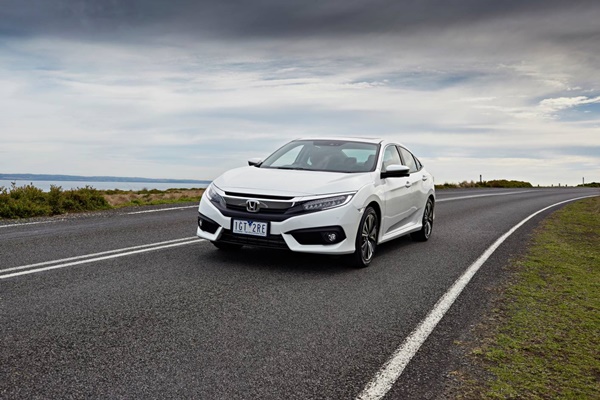 The current models fairly bristle with tech which is simple to use, and has Japanese reliability. There are further developments which keep the cabin quite, and the ride smooth.

Underfloor insulation, thicker glass in the front doors, and subtle styling, have combined to decrease noise and vibration. And, it has worked.

All models share the same sophisticated suspension and steering system.

A multi-link rear end and Macpherson struts at the front, have been teamed with Motion Adaptive Electric Power Steering to provide a sharp drive, and smooth ride.

Steering feels nice and sharp, but not as razor-like as the Golf GTI.

Honda’s Civic Type R is due in a jiff. The hatch promises to fill the sporty void left vacant in Honda’s lineup. It has big shoes to fill, but if the hatch and sedan are anything to go by, it will be a cracker.

There are two engines, but the top 3 models share a direct injection 1.5 turbo petrol 4-cylinder engine. Lag is all but eliminated by decreasing the turbine blades to 9, down from 11.

Engines have always been a Honda strength, and although late to the turbo party, the 1.5L makes up for its lack of power by being incredibly willing and able. Performance is leisurely, but not lacking.

The CVT is one of the better units on the market. I’ll prefer a traditional automatic, or even better, a slick manual. The top 3 models get paddle shifters to simulate the gear ratios you’d find in other transmissions.

Many new models are moving towards CVT for its lightweight solution to economy VS performance.

The CVT moves gradually though a range under normal circumstances. When under hard acceleration, the CVT simulates gears.

This prevents the engine from sounding like a combine harvester being machine-gunned to death.

It does the job so well, that most drivers won’t even notice. 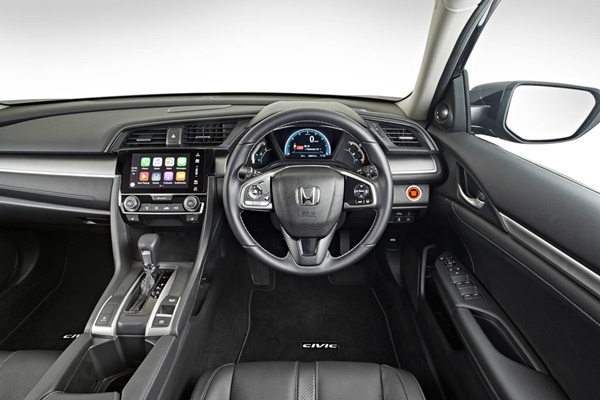 Honda listened to the market who said “no” to the awful HDMI connection required for the older generation units. It was a shocker to use, and had an objectionable personality. It was hard to use unless you studied the guide.

Even then, getting it to connect properly needed an app, and a good deal of luck.

In its place is the ubiquitous Apple CarPlay/Android Auto which millennials now demand. A simple USB charging cable is used to connect your phone to the system. It operates the same in every car that has it.

Top Tip: Buy a cable just for the car. Plug it in, and leave it there.

Glue it in place if you have light-fingered friends.

Honda have secreted the USB sockets out of reach to anyone with hands bigger than a five-year-old.

You’ll have to lean in from outside the open door to reach behind, and beneath the console. Thread the cable up through a small retainer where you can then connect you phone. The awkward placement is poor design.

There is a nifty tray with a non-slip mat to keep your phone in place that goes some way to making up for the USB debacle.

The centre console contains the little-used “econ” button. ECON buttons are the work of the devil. Civic is economical enough without having the performance-robbing “econ” programme activated.

In the bin with it.

The gear lever feels a bit light-weight, but is well placed. An electric brake switch, as well as a Brake Hold button complete the lineup. Brake hold allows you to come to a stop, then take your brake off the peddle until you are ready to get going again.

When you accelerate, the brakes release. It works like Hill Hold, but on level surfaces. The VTI-LX get heated leather seats, and the switches sit in the centre stack below the climate control knobs.

The dual zone climate control and a sync button which is a big plus. The driver can hit the sync when alone, to save having to fettle 2 controls every time he wants a temperature adjustment.

There is nothing more annoying than having to do this through a menu.

All models get the same, clear, 7” touch screen infotainment system. The VTI-LX gains a punchy 452watt, 10 speaker upgrade. The sound is excellent.

I love the DAB radio too. The clarity and depth of sound is high-end. Deep and rich lows mingle with crystal clear mids and highs to give a faithful reproduction of your favourite tunes. The equalizer is easy to find in the audio menu.

Settings and other options are easily accessed in a menu system that doesn’t require a PHD to navigate.

Satnav is standard, but you’ll probably find it easier to use maps via Caprplay.

Remember, Siri requires network coverage, so only works when your phone is in range. The rest of the Carplay features work regardless. Apps such as Stitcher are patchy on long trips.

Plugging you phone in brings up some of the features on the car’s central screen. You can perform most functions by pressing virtual buttons, but some can only be done by voice. And, here is where it becomes a safety plus.

You cannot access messages via the screen. Instead, the system reads the messages out to you. You reply by voice too. This just may well save lives.

As with all Iphone with Siri, you can use “Hey Siri” without touching any kind of control. It too, will allow you to access music, maps, and messages.

As Siri becomes more useful, you’ll be able to ask it for help.

These updates will occur with IOS developments, and is an exciting insight as to where future cabin direction is going. 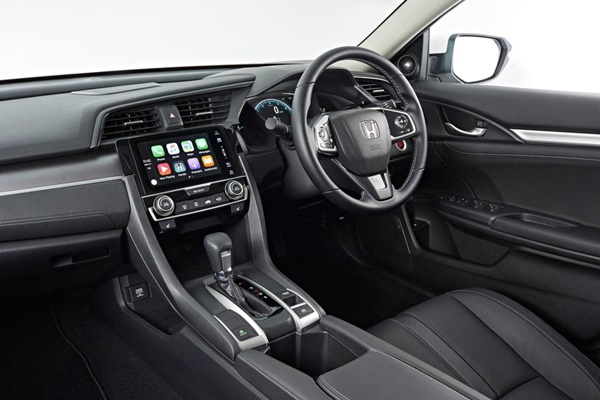 Seats and trim have a classy ambience about them.

Except for the afore-mentioned gear knob, materials feel expensive. Soft plastic, and simulated stitching, give the impression that the cabin is entirely trimmed in leather.

The driver’s readout features a combination of LCD screens and physical dials.

Honda could have gone a little further by having the virtual dash displaying all driver information. A full width screen can be reconfigured to show Satnav, leaving the centre screen free fr other functions.

It looks good and feels even better.

The steering wheel has a few innovative features.

I particularly like the touch button for the volume controls. It doubles as a conventional up/down switch.  You can press it if you don’t fancy sliding your finger up and down.

Smart cruise control buttons on the right side of the wheel are clearly labelled. More about that later.

The seating in comfortable, and although there is plenty of support, you move around a little with spirited cornering. No doubt the Type-R will sort all that out. 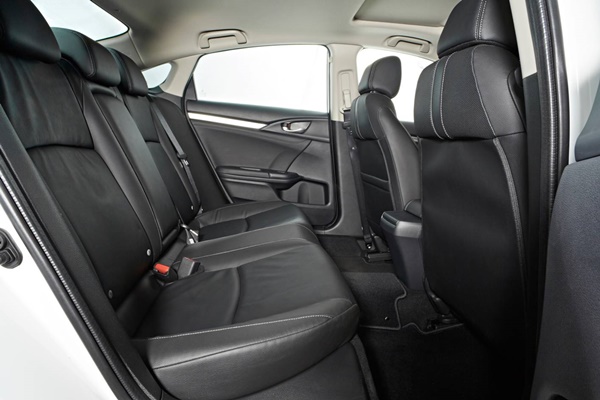 Honda Sensing is the name given to a suite of electronic gadgets that watch over you to keep you safe.

Lane Keeping has several modes, most of them active. The system keeps you in the middle of the lane by applying gent force to the steering wheel.

There are also audible warnings when you begin to drift.

The system will also try to stop you from drifting off the road on a long trip. Honda stresses these driver aids should never take the place of good practices. In other words, if you’re tired, don’t drive. Don’t use you’re mobile either.

Superb, there is no other word for it.

You feel like you’re in a high-end luxury brand, and if you close your eyes, you are. The one thing that has really come ahead in leaps and bounds is suspension and handling.

Smaller cars used to ride like cattle drays, no matter how much money you parted with. No so now.

Big bumps manage only moderate intrusion in the peace and tranquility of the travelers. You can throw Civic around in a sportier way than you might expect.

Although the output is modest, the engine keeps pace with competitors like Golf, Astra, and Impreza. 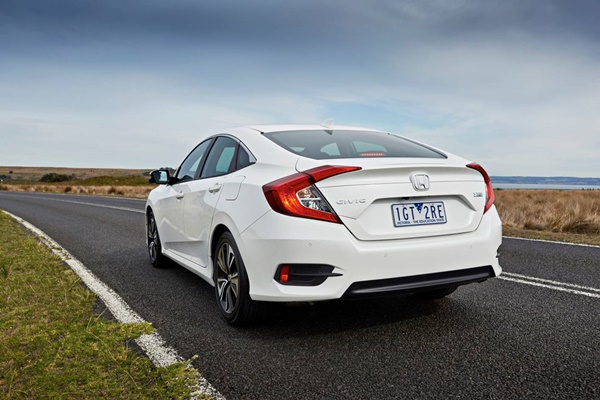 The segment is chock-full of offerings, and competition is stiff. Buyers demand value, but they are canny, and will shop around with just a few hundred dollars closing the deal.

Simon Lai, form Behind The Wheel, agrees with me. Civic has impressed us all with its value, design, comfort, and handling.

Smart cruise control has a queue function that allow’s Civic to follow the car in front without the driver intervening. I used this in heavy traffic. Once you learn to trust it, you can’t do without it.

As always, you need to keep your wits about you. A driver will always see more than a computer, no matter how smart it thinks it is.

The strong sales show buyers are equally enamoured. The balance between power and economy sit easily with a strong cabin and exterior design. With a price from $37,339 RDAP the Civic sedan comes with a 5 year warranty.

Civic looks long and low, and slightly mean and nasty. What a shame we won’t be seeing a Type-R sedan.