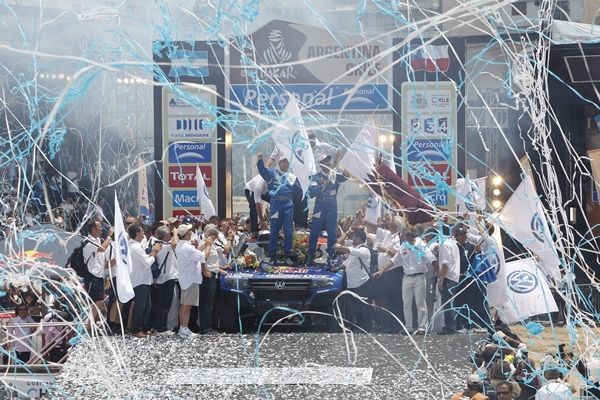 On Sunday after 13 brutal “Dakar” stages for man and machine Nasser Al-Attiyah let himself be transported triumphantly across the ramp on the roof of the Volkswagen Race Touareg 3 by co-driver Timo Gottschalk and celebrated by thousands of enthusiastic fans in Buenos Aires as winner of the motorsport marathon. This closing scene of the 2011 “Dakar”, which went with emotional force around the world as powerful images, symbolises two totally different sportsmen, who achieved something exceptional: Their first Dakar Rally win.

Both were instrumental on the near 9,600 kilometre long acid test through Argentina and Chile – through the sweltering heat of the Sierras Pampeanas and Atacama Desert, among the peaks of the mighty Andes and from the Atlantic to the Pacific and back – in fulfilling their respective youthful dreams of winning the “Dakar”. At 15-years of age Nasser Al-Attiyah from Qatar promised his father he would win the legendary desert classic once. Now, after the long-awaited victory is reality, the 40-year old will be honoured as his nation’s top sportsman with a huge welcome celebration in XXL style.

“As I drove the first few metres with Nasser I thought he doesn’t know where the limit is and would permanently exceed it,” remembers navigator Timo Gottschalk of his first drive together in the Volkswagen Race Touareg during a test in Hungary at the beginning of June, 2009. “After a while I really noticed that he was well aware of how to assess the risks involved, that he has incredible car control and his driving style is not always maximum attack.” For Al-Attiyah, with whom the conscientious man from Neuruppin forms a duo since the Rallye dos Sertões in 2009, the exceptional quality of the partnership was obvious from the first minute. “From the very beginning with Timo it felt as if we had already driven together for years,” says the personable Arab. “Timo is like a brother for me. I can depend on him completely.” Who is the boss in the car? “Very obviously Nasser,” says Timo Gottschalk. “But I give the orders.”

Winning the Dakar Rally means realising a long-cherished goal in life for Nasser Al-Attiyah. The Qatari had kept one of two central spaces free in his cabinet for the exceptionally large “Dakar” trophy. The Olympic gold medal for clay pigeon shooting should fill the other, for which Al-Attiyah trains every day for this non-motorsport activity – relaxation and preparation for the “Dakar” in one. However, the expert in conquering sand dunes at the wheel of an automobile does not have much time at home in the desert Emirate: Al-Attiyah is driven by speed and is travels permanently around the world at racing speed. In addition to his events for the Volkswagen factor team in the Dakar Rally and the preparation rallies the horse lover regularly contests rounds of the World Rally Championship and sprint rallies in the FIA Middle East Championship. With success: Al-Attiyah can claim a total of six titles to date in classic rally championships. In June 2010 at the 24-hour race around the Nürburgring-Nordschleife he celebrated class victory in the Volkswagen Scirocco GT24-CNG for cars with alternative drives. What makes the “Dakar” victory so special for Al-Attiyah? “The ‘Dakar’ is, after all, the ‘Dakar’. It is the toughest test in motorsport and my absolute favourite rally,” says Al-Attiyah. “There is no better arena than this one to prove what you are capable of.” During the 33rd running of the marathon this meant controlled attack at the right moment for Al-Attiyah. “This year Nasser drove cleverly and forwardthinking like never before,” praises co-driver Timo Gottschalk. “He even accepted losing time on stony sections so as not to risk damaging tyres. Instead he attacked where he felt very comfortable: In the dunes. This was one of the keys to victory.”

Meticulous worker with both feet on the ground: Timo Gottschalk

“Timo knows to calm me down in the cockpit when necessary. He is a calm and relaxed thoroughly honest guy,” according to Nasser Al-Attiyah, who already thinks about the future together. “Now we are ‘Dakar’ winners and everybody will want to beat us. So, you have to be even better prepared and even more professional. If this is still even possible to improve when compared to now, then Timo is the right man for the job.” Timo Gottschalk is in fact a meticulous operator for success. Like every co-driver in the Volkswagen “Dakar” team he navigates during the day at race pace. In the evening and occasionally into the early hours of the morning preparation of the road book for the following day is on the agenda. “An incredibly tiring job, during which you ask yourself at least once a day why you actually do it,” says the 36-year old. “But when you reach the big goal you know why you subject yourself to the whole thing. It’s an incredibly great feeling to be ‘Dakar’ winner.”

Timo Gottschalk, who, in addition to his job as Volkswagen co-driver, also works as vehicle technology engineer and runs a car and motorcycle workshop in his hometown of Rheinsberg, is not in danger of ‘taking off’ in view of the success. He has both feet securely anchored on the ground. The down-to-earth guy has found happiness with his girlfriend Ine. Gottschalk lives together with her and her children in their house in Rheinsberg. “I have found my perfect personal environment, which gives me a lot of energy and support and is the perfect contrast to the hectic motorsport business.”

Perfect harmony outside the cockpit, constructive inside: The closely-knit team Al-Attiyah/Gottschalk only clashed with one another on a couple of occasions during the 2011 Dakar Rally when quick decisions were required. “We do get loud sometimes if we have different opinions,” says Al-Attiyah. “But only for a few seconds, since we convert this energy into sporting motivation. There are no serious quarrels between us.”