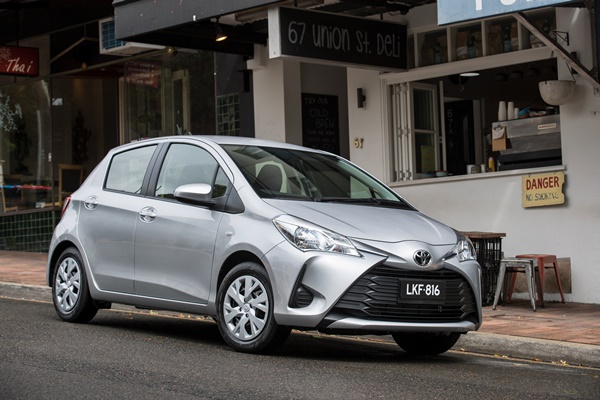 The Toyota Yaris is not a car I usually drive. In fact I don’t think I have driven one before as my Gen Y editor previously drove all these type of vehicles.  I guess a middle 50’s male that is larger than the average bear, isn’t really the target market, yet I was pleasantly surprised. We had the Yaris Ascent which is the entry level model priced from $18,765.
Toyota updated the Yaris range in March 2017 and as we had driven the updated Kia Picanto earlier this year it made sense to drive the Yaris. While technically not a direct comparison the sub $20,000 market segment I tend to lump all together.

From the outside the Yaris is actually pretty stylish. Toyota ED2 design studio in the south of France performed most of the design work. From the front the bonnet and grill look quite bold and with purpose. The Yaris has strong hip lines rising towards the back and the rear, an area where many hatch vehicles fall away, retains the bold stance. It reminds me of a small Terrier or Pincher in the dog park bossing all the bigger dogs around. It just has that feel about it when you look at it.

So the first impression was pretty good, but I wasn’t looking forward to sitting inside. My experience with a number of these smaller cars is that it is difficult and cramped for someone my size. Getting down into the car with a dodgy right knee was a little daunting though. But as Gomer Pyle used to say, surprise surprise, it was relatively roomy and comfortable. 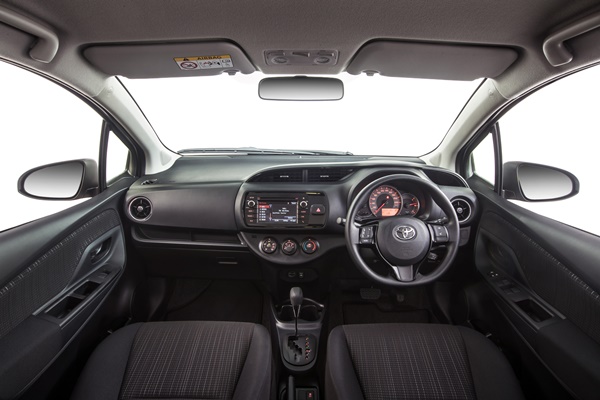 There was more than enough seat slide for me to feel comfortable as well as enough head and shoulder room. Being a manual I could still change gears. On many of these smaller cars there isn’t enough room for my long legs to fit and clear the top of the clutch pedal.

The seats are comfortable and I know the pricing is sharp, but I would really like a lumbar support. You kind of adapt to the driving position, rather than specifically arranging it for you. I like the dash dial arrangement. The large central dial with a heap of information is practical. 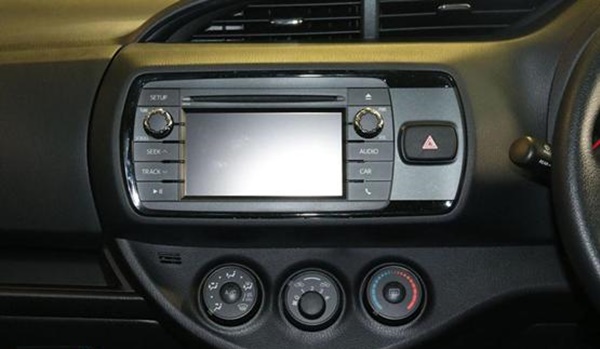 Toyota has introduced an upgraded feel to the dash and other areas with a darker tone. The 6.1-inch display audio screen provides touch, drag and flick operations familiar to users of smartphones or tablets.

While the dash and centre stack controls are well placed and easy to read and use, the centre console is lacking any form of arm rest. In its place is, well, nothing. That is annoying and would be uncomfortable on longer trips, and removes a useable storage area. There is the usual cup holders etc, but to be honest the storage is something that could you could use more of.

The rear passengers have a fairly flat bench seat, but the flat footwall means that they have plenty of space for their feet. There would want to be a small passenger behind my seat when I am driving, but I guess this car is for the younger brigade anyway, and they tend not to complain, but rather enjoy the company of each other while driving. 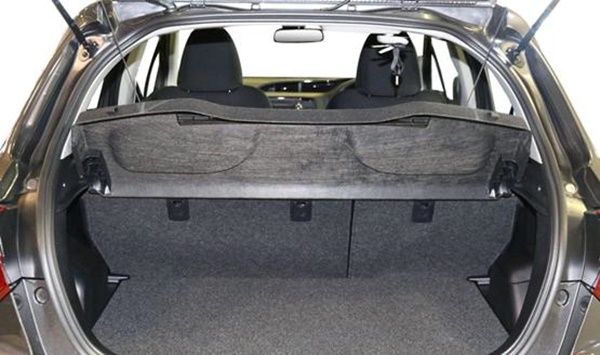 The boot area again is fairly large for this size vehicle and the rear seats fold to allow a practical larger area. 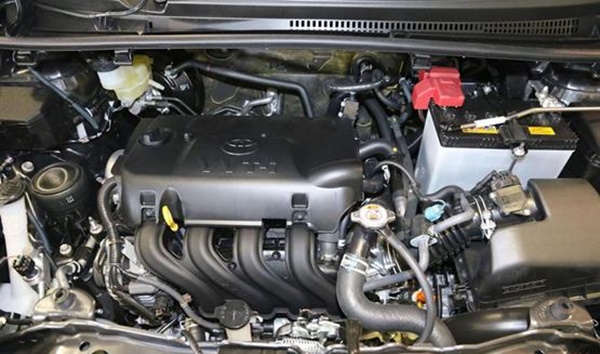 The Ascent we drove was powered (sorry that wasn’t meant to be a pun) by the 1.3L 4 cylinder petrol engine. This produces 63kW at 6000rpm of power and 120Nm @ 4000rpm of torque. The Ascent comes with a 5 speed manual transmission.

Unfortunately when I first jumped in and drove off I had just swapped it from a 351kW V8 sports car, so you can imagine I felt like someone had stolen my engine. However after about 5 minutes I got the feel of the little Yaris and for around town trips it is spritely enough. The transmission is smooth but the clutch had a high take up point which took more time to get used to. The benefit of the smaller engine is fuel economy which is around 5.8 L/100 ADR combined.

I know that providing an entry level manual transmission vehicle also provides a price point, however over 95% of younger, especially female, drivers I have spoken to that are prospective buyers of this car, hate manuals, many of them can’t even drive a manual.

Driving the Yaris was actually a lot of fun. The small engine and manual transmission worked well together and I found myself actually enjoying my time with the car. It was also pretty quiet. I know the two vehicles are a long way from each other, but the Yaris enjoys strong presence on the WRC circuit. So there must be a great underpinning for the WRC models.

The key to this market is providing safety as a feature and the Yaris Ascent comes with a 5 star ANCAP safety rating.

Every Yaris is fitted with seven airbags, a reversing camera, vehicle stability and traction control, anti-skid brakes with electronic brake-force distribution and brake assist, and an emergency brake signal that flashes the hazard lights. This is in addition to a strong safety cell surrounding the passengers.

Advanced safety features are available as a $650 option on the Ascent. These include – a pre-collision system with autonomous emergency braking, lane departure alert and automatic high beam. All I know is if it was my daughter or son driving this, the option box would be ticked.

The pre-collision system uses a front-mounted laser to monitor the road ahead, warning the driver of an imminent collision risk and preparing the brakes to deliver maximum braking the moment the brake pedal is pressed. If the driver fails to respond to the warning, the system will trigger autonomous emergency braking to slow the car to reduce the severity of any impact.

Lane departure alert monitors lane markings on the road surface and helps prevent accidents caused by the vehicle moving out of its lane. If the Yaris begins to deviate from its lane without the turn indicators being used, the system alerts the driver with visual and audible warnings.

Automatic high beam detects both the headlights of oncoming traffic and the tail lights of vehicles ahead, automatically switching between low and high beam to avoid dazzling other drivers while maintaining the best possible illumination for night-time driving.

So to sum up, the Toyota Yaris Ascent was surprisingly pleasant to drive. It is very stylish for its size and barks above it weight in looks, so to speak. However the bark turns to no bite with the engine, but it is fun nevertheless. 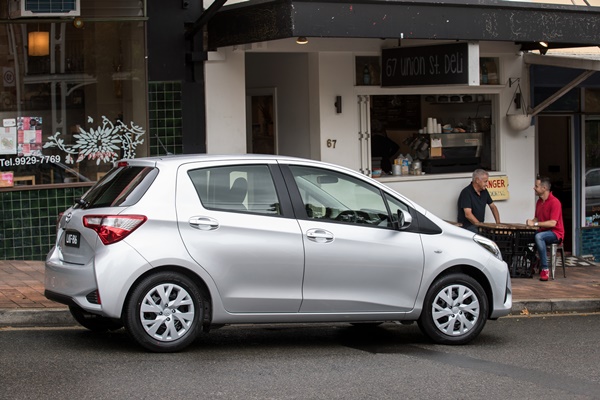 Australian motorists have bought almost 220,000 Yaris models since the nameplate arrived in Australia in October 2005. Yaris replaced Toyota’s Echo which had been the best-seller in the light-car segment for the previous two years. Echo was the nameplate used locally for the first-generation Yaris and achieved almost 82,000 sales. Yaris has led the light-car segment in four calendar years and has been runner-up five times. Every new Yaris is covered by Toyota Service Advantage capped-price servicing at a maximum of $140 per service.

When people ask me what my ultimate ‘Family Car’ is I always reply – the Toyota Kluger. To me, it’s the essential ‘Soccer Mum’ car. This week we have had the top of the AWD line – the Grande – to test. [Read More]

November 14, 2019 Pete Wilson Lifestyle, News Comments Off on Do’s and Don’ts When Communicating With an Insurance Company After an Accident

Nobody wants to be involved in accidents, but these circumstances are inevitable. Whatever the level of caution and attention we apply, some instances could not be avoided, particularly accidents on the road. [Read More]