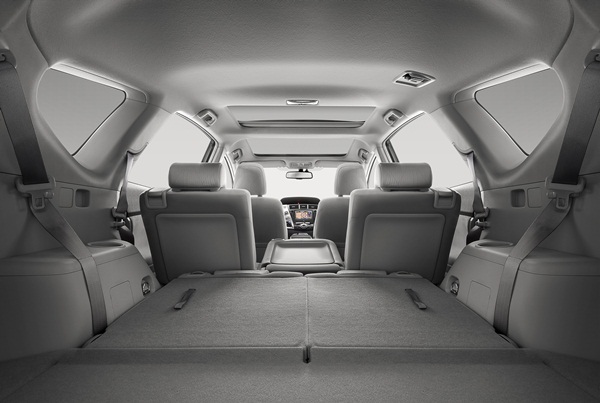 Toyota’s new versatile Prius v is the world’s first full-hybrid seven-seat bringing a unique edge to the family wagon market. The Toyota Prius v should bring new buyers to the company’s expanding hybrid family when it arrives in Australia towards the end of May.

Prius v is longer, taller and wider with more shoulder and hip room as well as offeringseven seats in a two-three-two configuration and has a unique exterior design while sharing a family resemblance with the standard Prius flagship

Measuring up to its versatility tag, each of the three second-row seats in Prius v can slide independently into the most convenient position and the seat-backs can be folded forward separately.

The two seats in the third row can also be folded flat individually – or together to provide significantly more luggage-carrying capacity than Prius.

They placed a compact, high-density lithium-ion battery under the centre console between the driver and front passenger – rather than using the larger nickel-metal hydride battery in Prius.

Prius v is the first Toyota production vehicle in Australia fitted with a lithium-ion battery pack.

Fuel economy is expected to be better than most SUVs, wagons and cross-over vehicles on the market.

“Many customers have told us that, while they love everything about their Prius, they want a smaller vehicle in the city – so we recently introduced the Prius c,” Mr Callachor said.

“Other customers, including active young families, have told us the opposite: that they want a vehicle with more space.

“Enter the Prius v, which has an unmatched combination of space, versatility, technology and fuel efficiency in a mid-size package.”

When Toyota released the Yaris, it was lampooned for no longer having an entry level car under 20k, and quite right too. It is a nonsense. So, can real men drive Yaris Cross? [Read More]

Kia Connect – Kia has just released the second generation of their Niro small SUV. This is small SUV they have, the other is the Seltos, [Read More]