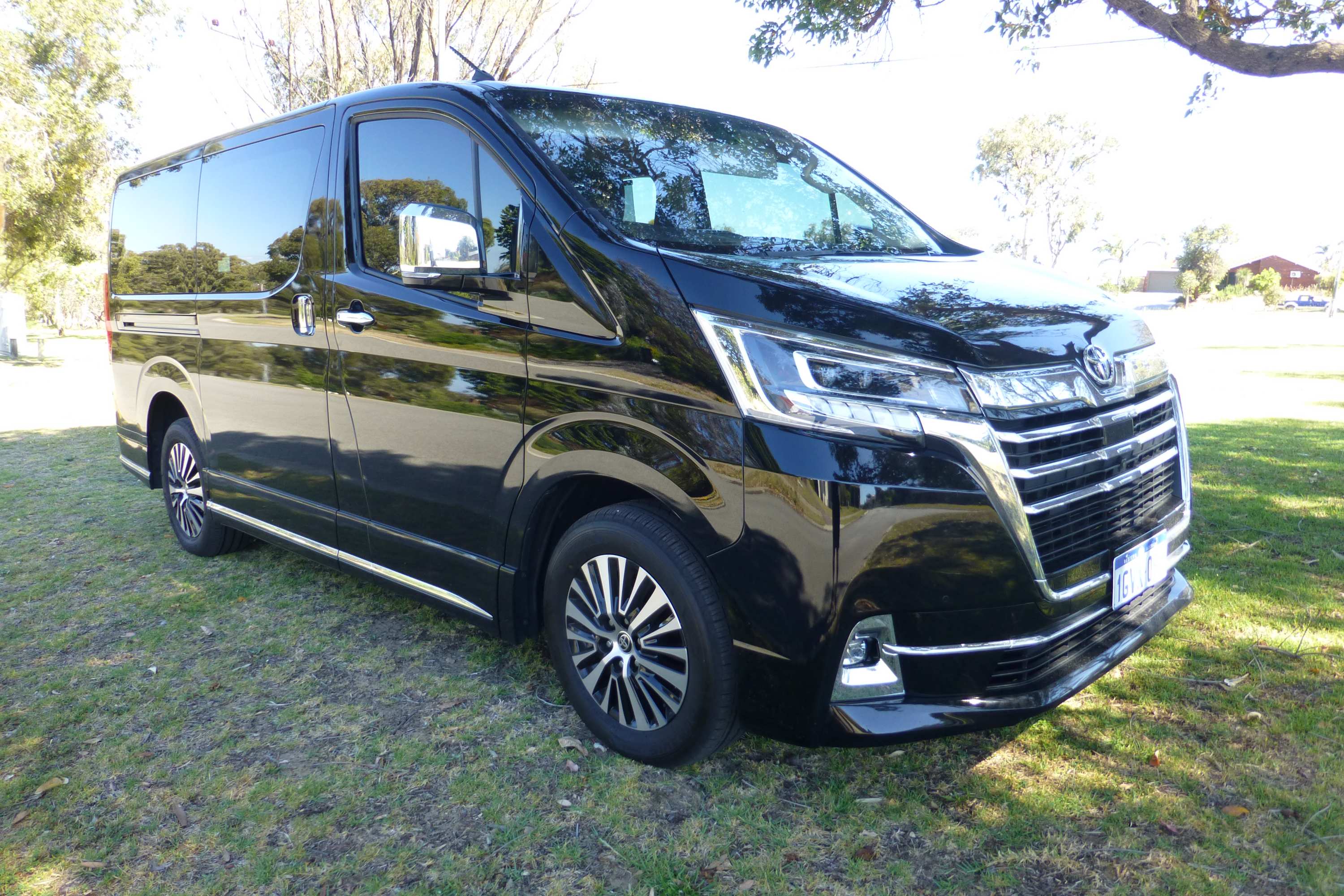 Frustrated film goers still ponder the meaning of 1968’s “2001: A Space Odyssey” and have only now begin to see the tangible explanation. It’s a Toyota.

Before you dismiss this as pure fantasy (spoiler alert: the film wasn’t real), consider the rolling black monolith central to the Clarke-Kulbrick film as the latest Granvia – itself block-shaped, razor-edged and able to open to reveal a cavernous interior of seemingly endless space.

It distorts time, appears bigger in the flesh compared with pictures, and finished in black with heavy-tint privacy glass, alludes to containing people who make a living out of hurting other people.

The Granvia may look as creepy as a hearse, but it’s sole purpose is not to frighten, but cocoon.

Toyota’s Granvia is the replacement to its Tarago. Oddly, the Tarago was a purpose-designed and built people mover, much like the current best-selling multi-seat van, the Kia Carnival.

In 2019, with the Tarago slipping behind in sales as the Koreans (including the Hyundai iMax) marched into Australian driveways, purpose-built gave way to practicality and the new human trafficker is based on the latest Hiace commercial van.

That’s actually a good thing. Forget the old days of the Ford Econovan with an extra two rows of bench seats, the Nissan experiments that made the family feel like a member of the Telstra linesmen team and the awful confines of the tiny multi-seat boxes from Japan that shared safety standards with a bicycle.

As a base, the Hiace is not anywhere near the same level of commercial-van nastiness. It is, for example, streets ahead of the rattly and occasionally suspect reliability of the Volkswagen Transporter/Caravelle.

This is one people mover that ticks all the boxes, especially for well-heeled families. The entry price is $62,990 plus on-road costs for the six seater, rising to $64,990 (eight seats); then $74,990 for the top-spec VX with either six or eight chairs.

So the base Granvia is sound and the methods used to bring it into a higher level of civilisation are well meaning and successful. But does it tick all the (big) boxes? 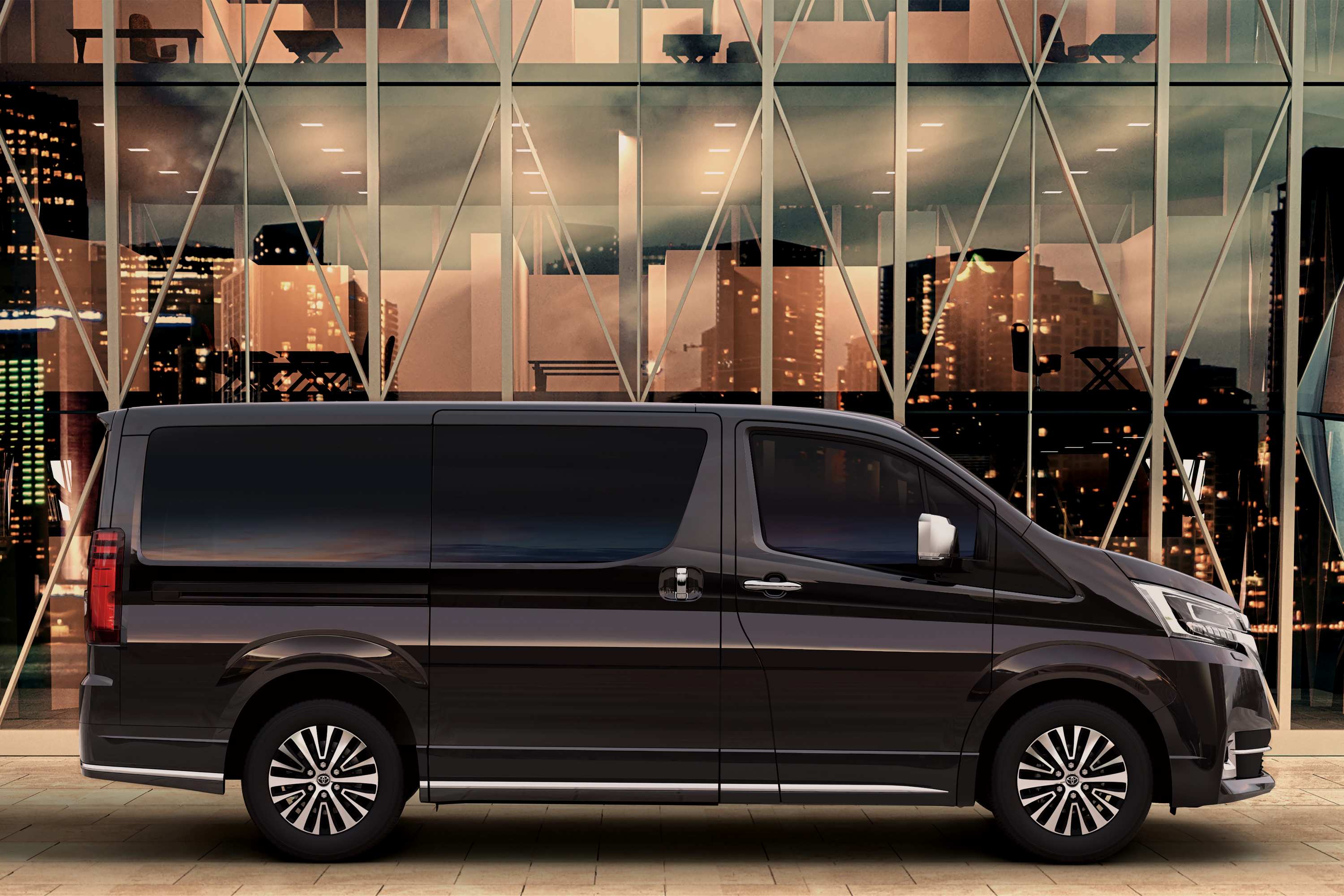 So Lego has made a revival and there’s even been a stab at a TV show based on clicking plastic blocks together. The Lego lovers adoration of things square-edged and shiny will make them fans of the Granvia.

From all angles, it’s the new Hiace. Compared with the old Hiace, this one has a nose that should be the first clue that the engine is placed forward of the passenger cell.

Note the doors that are set back from the front wheels and which put the front occupants further back, improving safety in a decent prang.

There are two sliders either side, and a humungous lift-up tailgate that – unfortunately – is not fitted with an electric motor.

So at this point it’s all Hiace. But check out the wheels, now alloy not Hiace-standard steel. There’s more exterior niceties, like a bit more chrome and body-coloured parts including the door handles. 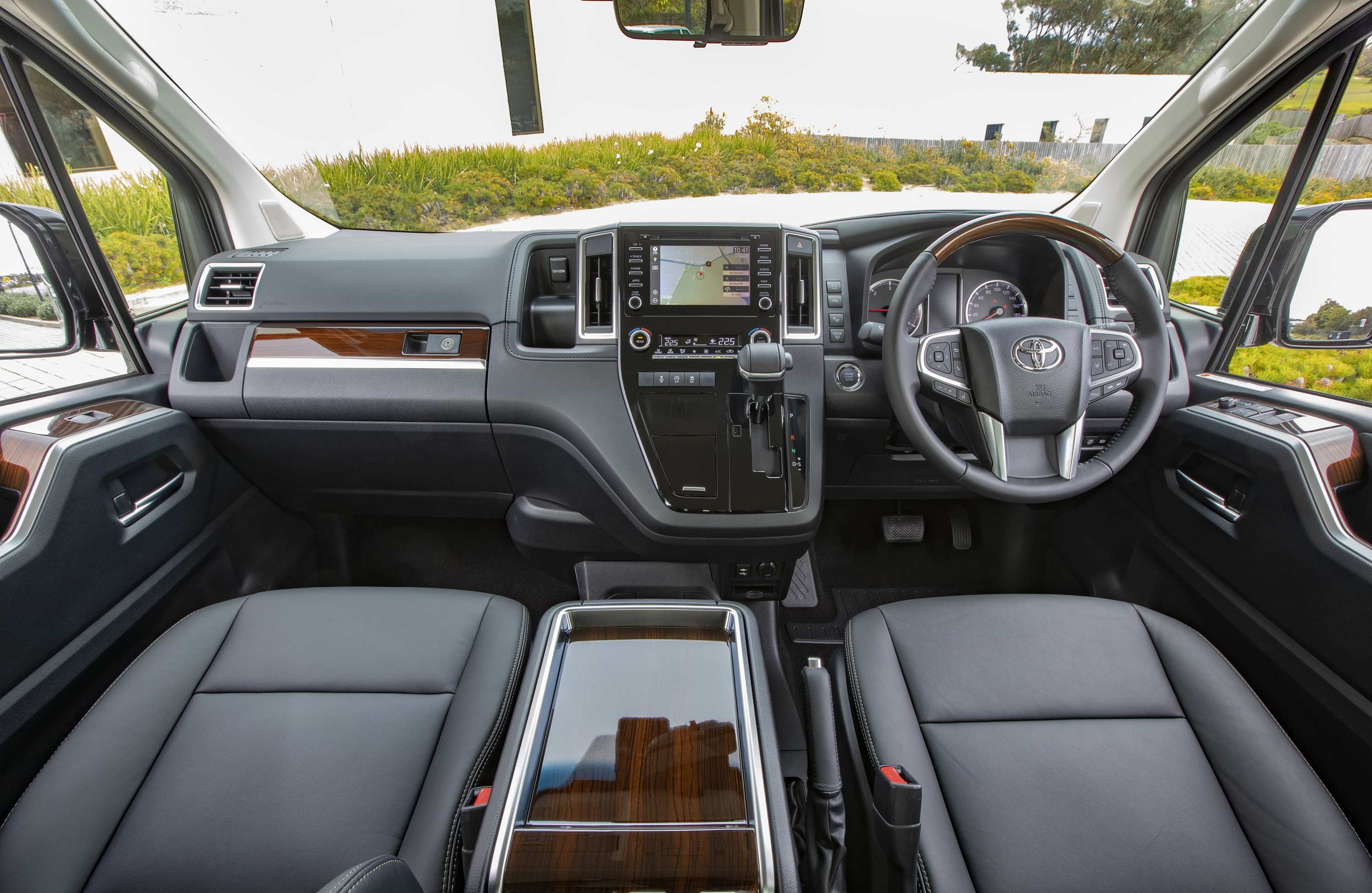 Dr Who walked from a London street into a blue box and into an area the size of an apartment. Well, that’s according to television. I picked up my grandson from school and his reaction when the doors opened was exactly the same – disbelief.

His booster seat sat tall in the second row but importantly, it wasn’t excessively high for him to struggle to get himself seated. And this is the thing about the Granvia – it may look monolithic in proportions and shape, but it’s lower than the previous Hiace and a heck of a lot easier to enter and leave.

My grandson noted this as a passenger and I certainly felt more comfortable as a driver, both getting in and out plus in the more relaxed driving position that was lower, setting the steering wheel more with an attitude of a passenger car.

There are two Granvias – the everyday model and the VX. Both come with the choice of six or eight seats. Here’s the rub – the VX is as loaded as the NRL and was tested with its six captain’s chairs. 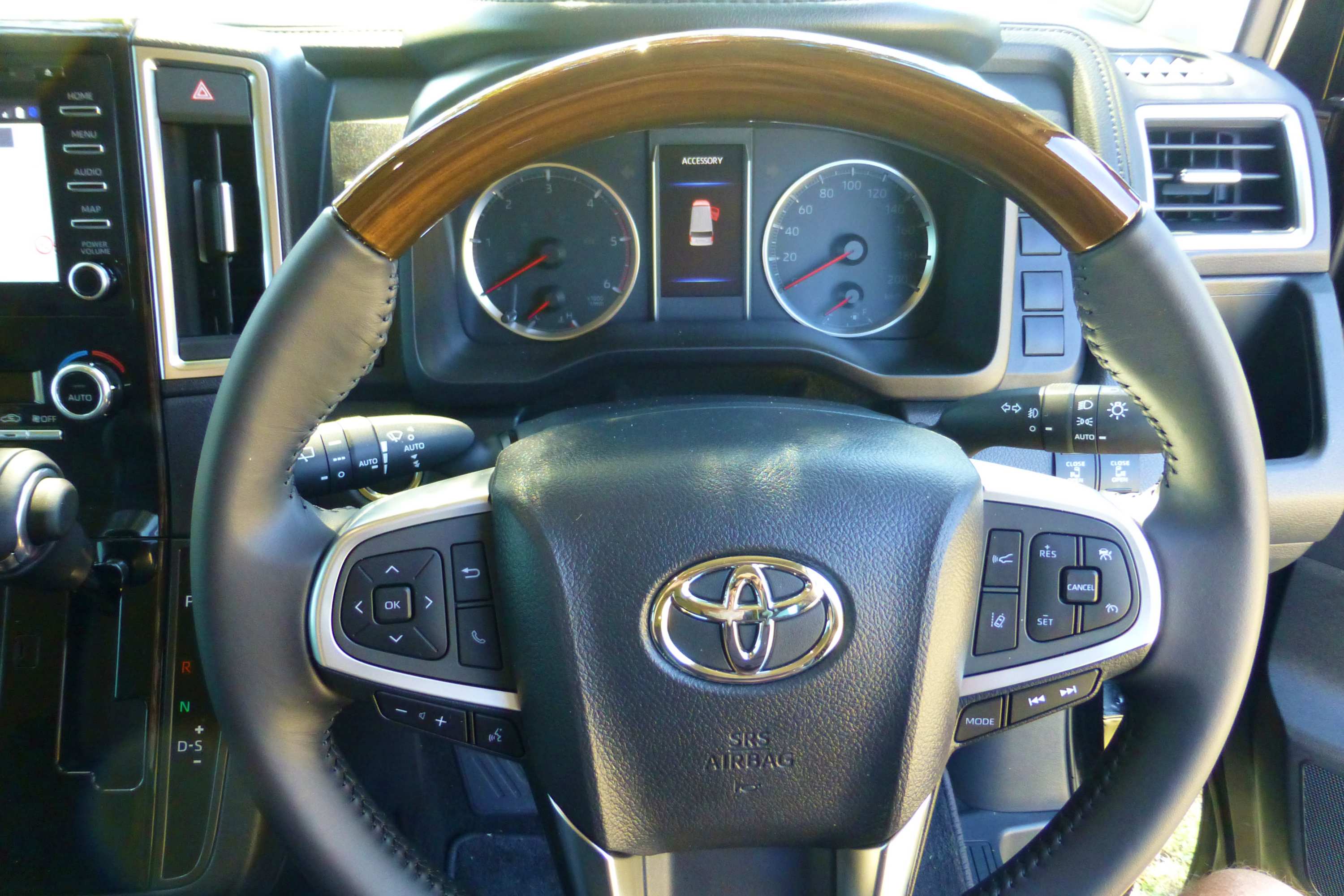 It’s designed more as an executive transit vehicle, so it’s all leather, small side tables, cupholders (that probably suit champagne flutes because that’s a fun way to get to the airport) and storage bins. The leather is quilted and the chairs have high armrests, so everyone feels cosseted.

These four chairs in the rear are able to be slid fore and aft, and can recline to a snooze angle. Quite a decent way to travel – but not one you’d offer your children in the regular family vehicle.

That’s because vans – er, people movers – are all about versatility. The six seater versions of the Granvia don’t have seats that fold flat, so carrying cargo is not as efficient.

They’re designed for people. What you want is the eight-seater versions, in base model or VX. Here the seats fold down, tumble forward and can be removed.

Case in point: I was called on to move a large LED TV for a family member but the six-seater didn’t have enough space between the third row to slide the TV through. LED TVs, apparently, can’t be laid flat so the Granvia failed the job test. 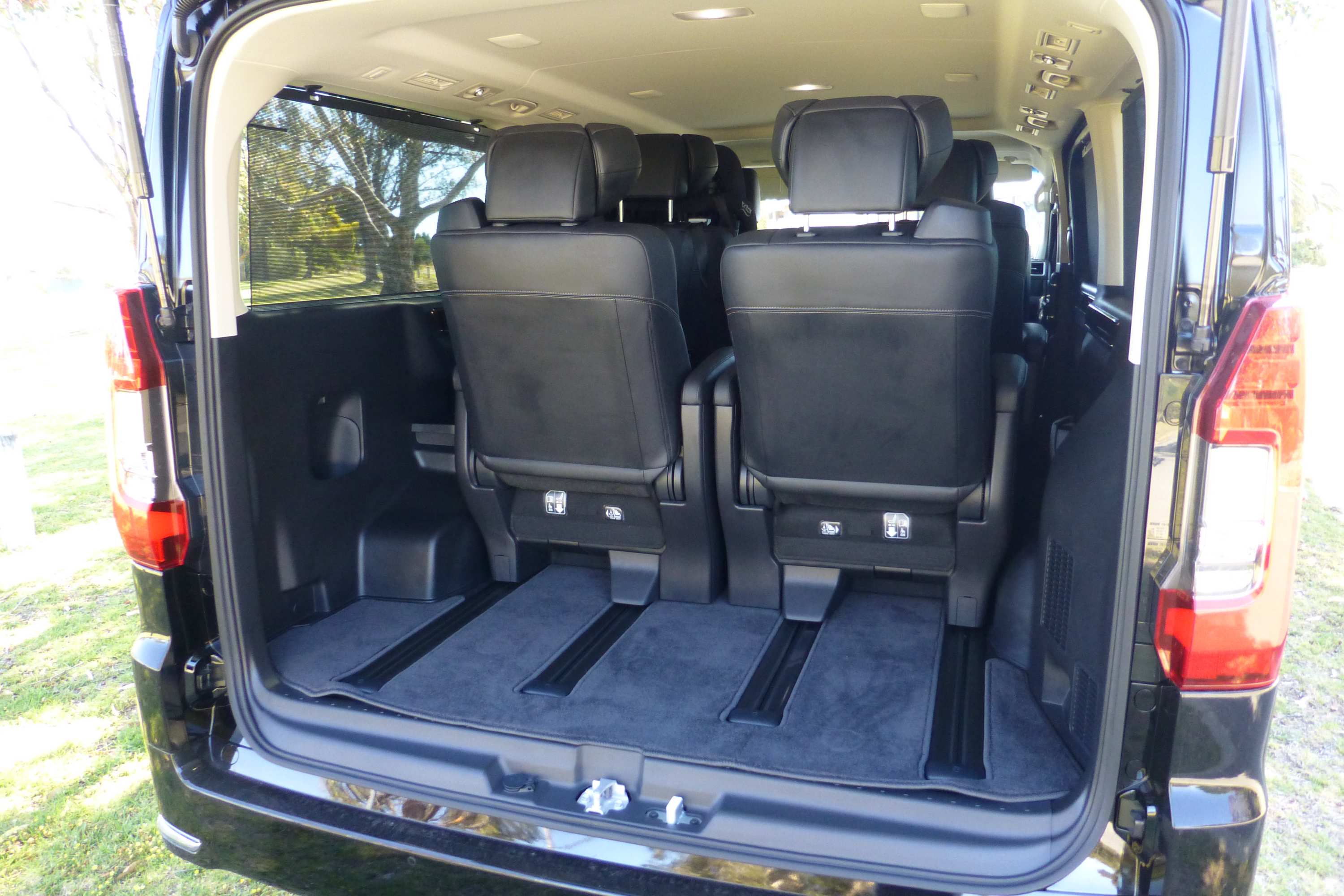 So – six seater for taking paying customers to the airport; eight seater for your family.

There’s also good news for the driver. Unlike the last generation Tarago, which had a front-drive layout (except for the Japanese-market all-wheel drive option), this newbie is rear drive and the engine is placed longitudinal.

That allowed Toyota to push the engine forward and out of the passenger cell, creating a bonneted nose and reducing the cabin floor height. So it is much easier to enter, with barely a step up to the driver’s seat.

All the desirable van features are in the Granvia. There’s a wide and deep boot area, which can be extended by sliding the third row forward. There are storage pockets and up front, a decent glovebox and huge centre bin. There’s some smaller storage areas in the dash – not as many as one would expect coming from a commercial heritage, however – and huge bottle holders in the doors.

The Granvia gets a 7.0-inch touchscreen, 4.5-inch info screen in the instrument binnacle, digital radio with CD player (yep, still makin’ ’em), seven USB ports, Bluetooth and Apple CarPlay and Android Auto compatibility (one of the first Toyota products with these app-based links).

It also has satellite navigation with SUNA live traffic reporting, operates on voice recognition and has Siri Eyes Free.

The great thing about this list of infotainment features is that this is for the standard Granvia – the VX only adds 12 speakers instead of six. 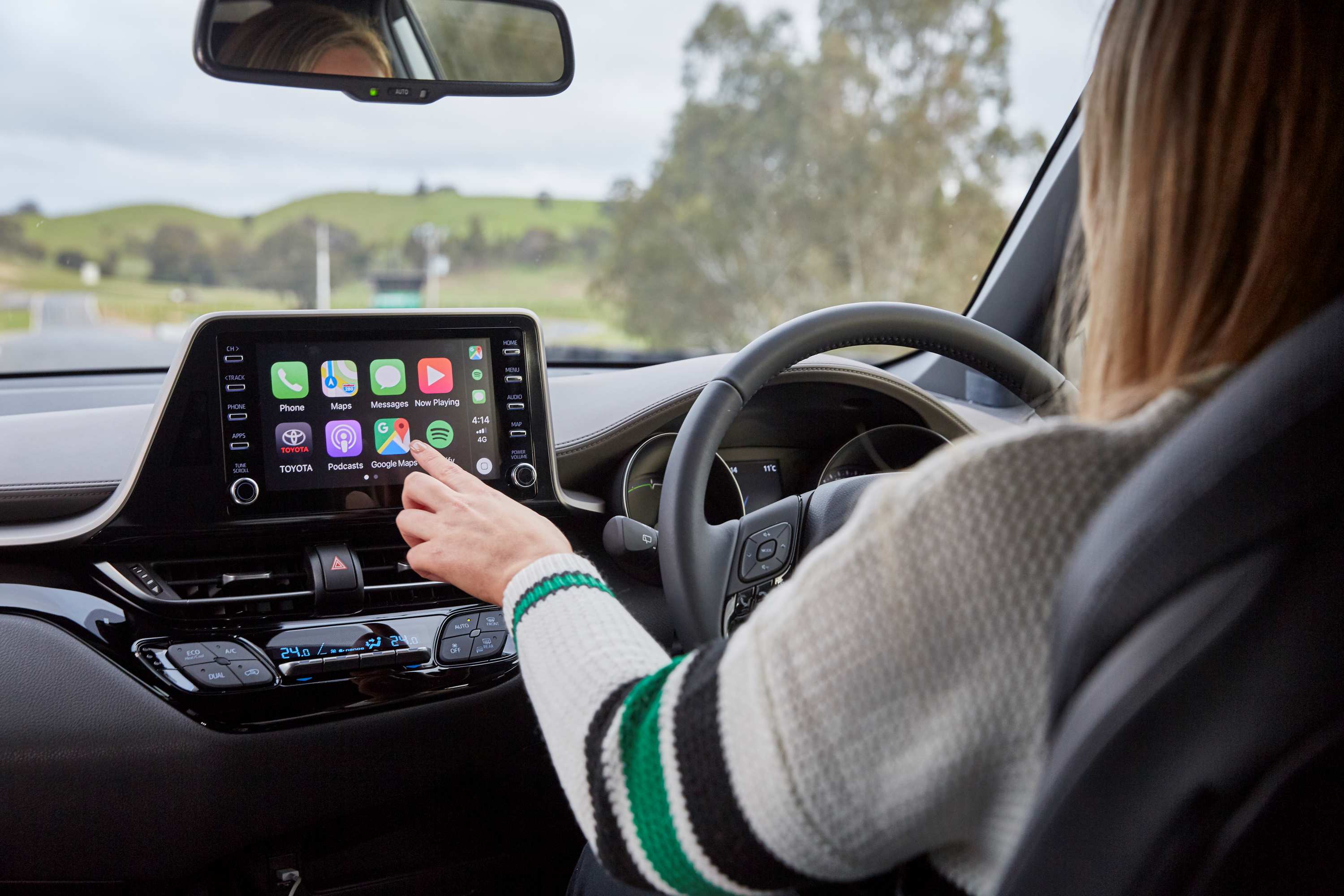 What are the Features of the Granvia:

This all about space. But though Toyota has the perfect palette – or in this case, empty box – the seating arrangement isn’t as efficient as it could be.

The VX has all the fruit, from quilted leather seats to 12 speakers, but is this what you want?

The VX adds electrically-operated side doors (with buttons on the right-side of the dash and in the key fob), leather captain’s chairs (four electrically-operated in the back for the six seater, two with electric adjustment and two with manual adjustment for the eight-seater), heated seats all around for the six-seat version, rear sunshades, a cabin dehumidifier, and panoramic view monitor. 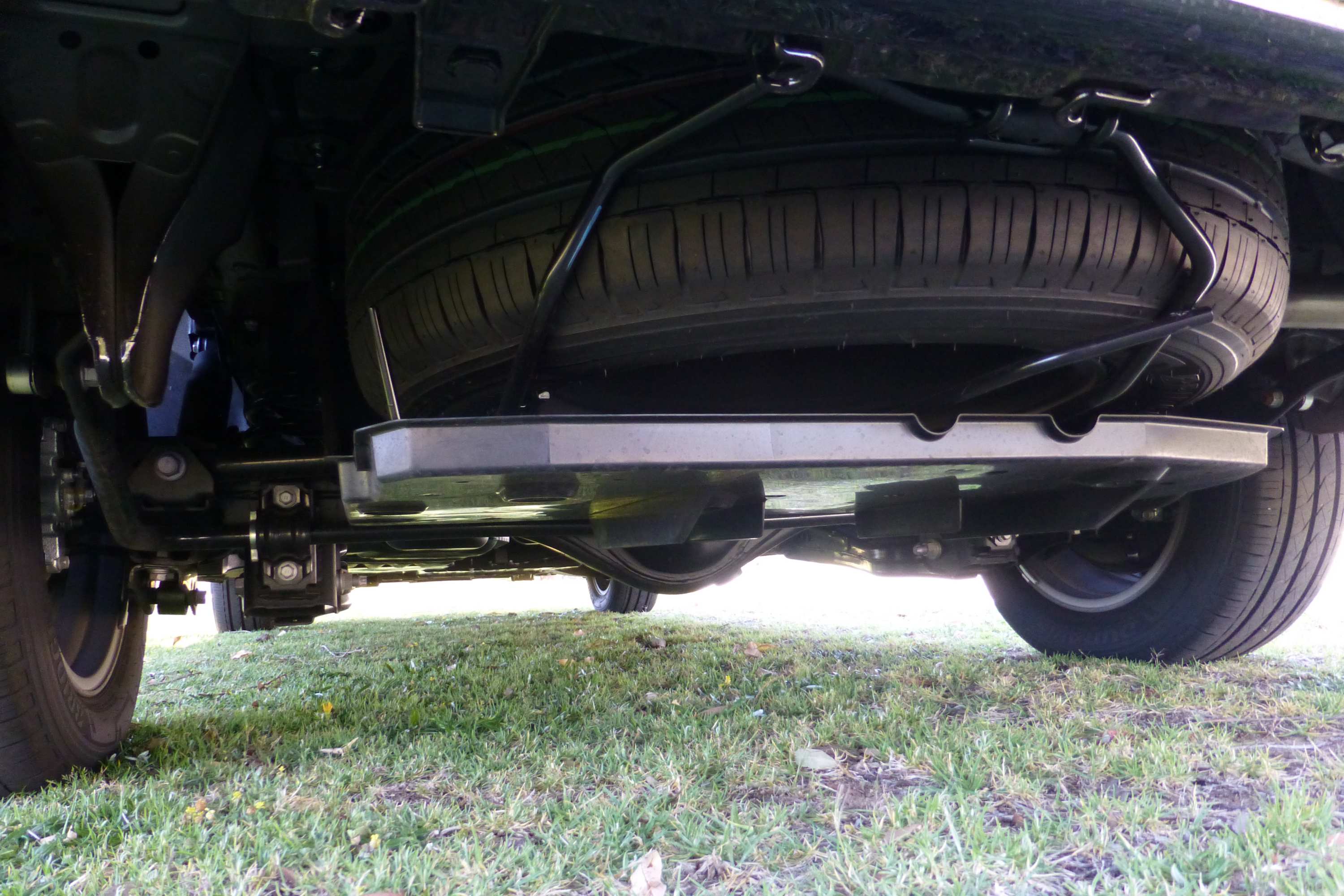 So the downside is how the seats are arranged. It’s great having a four row vehicle but the last row takes up a lot of room that means luggage space is almost non existent. It is also not removable, so the seat backs can fold but that’s it.

The other seats slide and fold but with the four-row versions the legroom is increasingly tight as you move down the aisle. Much like having the cheap seats at the back of the theatre. 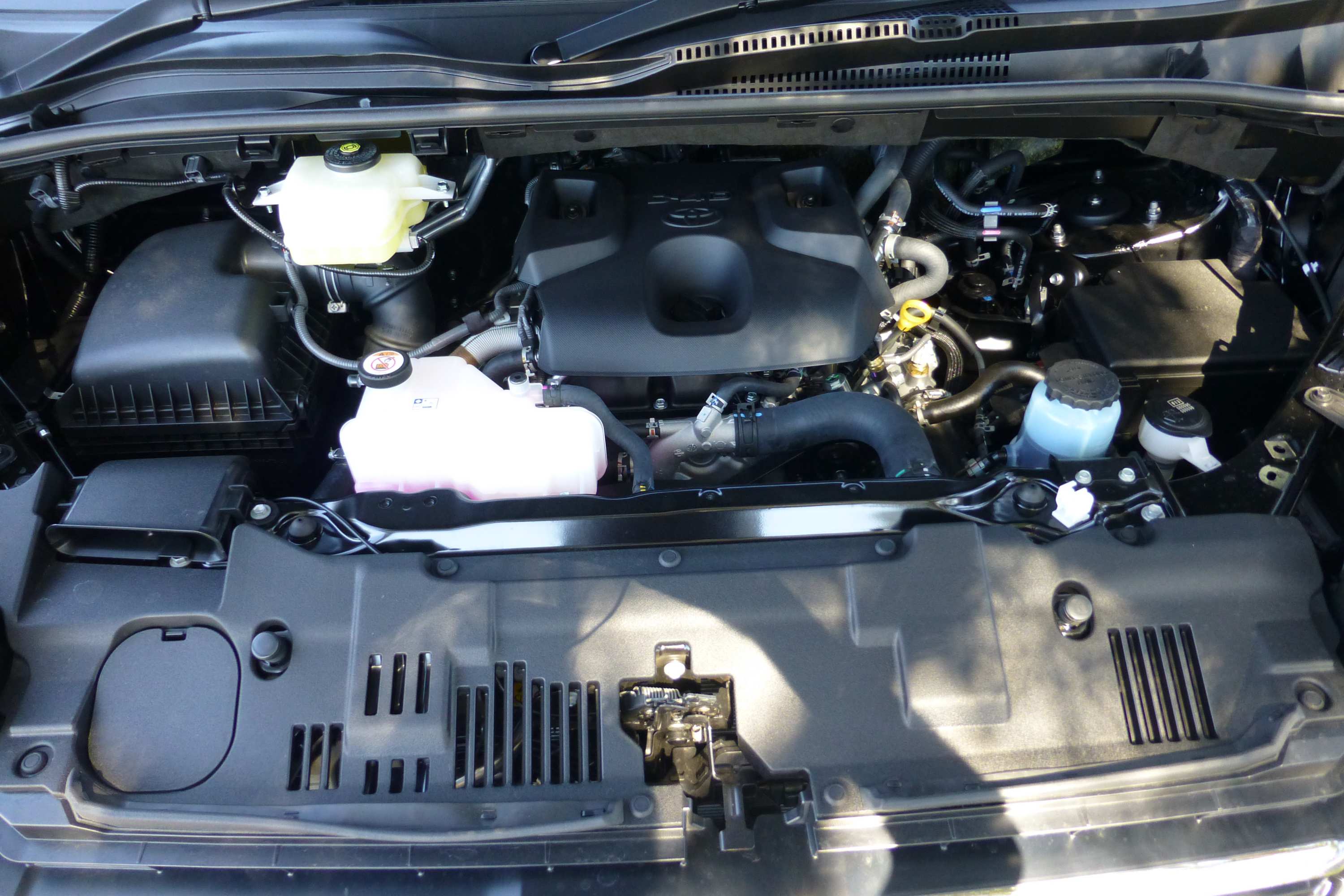 What is the Engine and Drivetrain:

The Granvia shares the Hiace’s 2.8-litre turbo-diesel engine and six-speed automatic transmission with drive to the rear wheels.

You know this engine – it’s also used in the Hilux and Prado – so it’s been around for a while and is a decent unit that is not especially remarkable at anything but has a strong record for durability.

It uses the same auto but there’s no high-low transfer case or 4WD, though there is an electronically-controlled limited-slip differential that works by applying the brakes to individual wheels and sending power to the rear wheel with the most grip.

The diesel engine is a beauty, feeling more lively in the Granvia than in the Prado and Hilux, despite the Granvia weighing around 200kg heavier than the Prado. 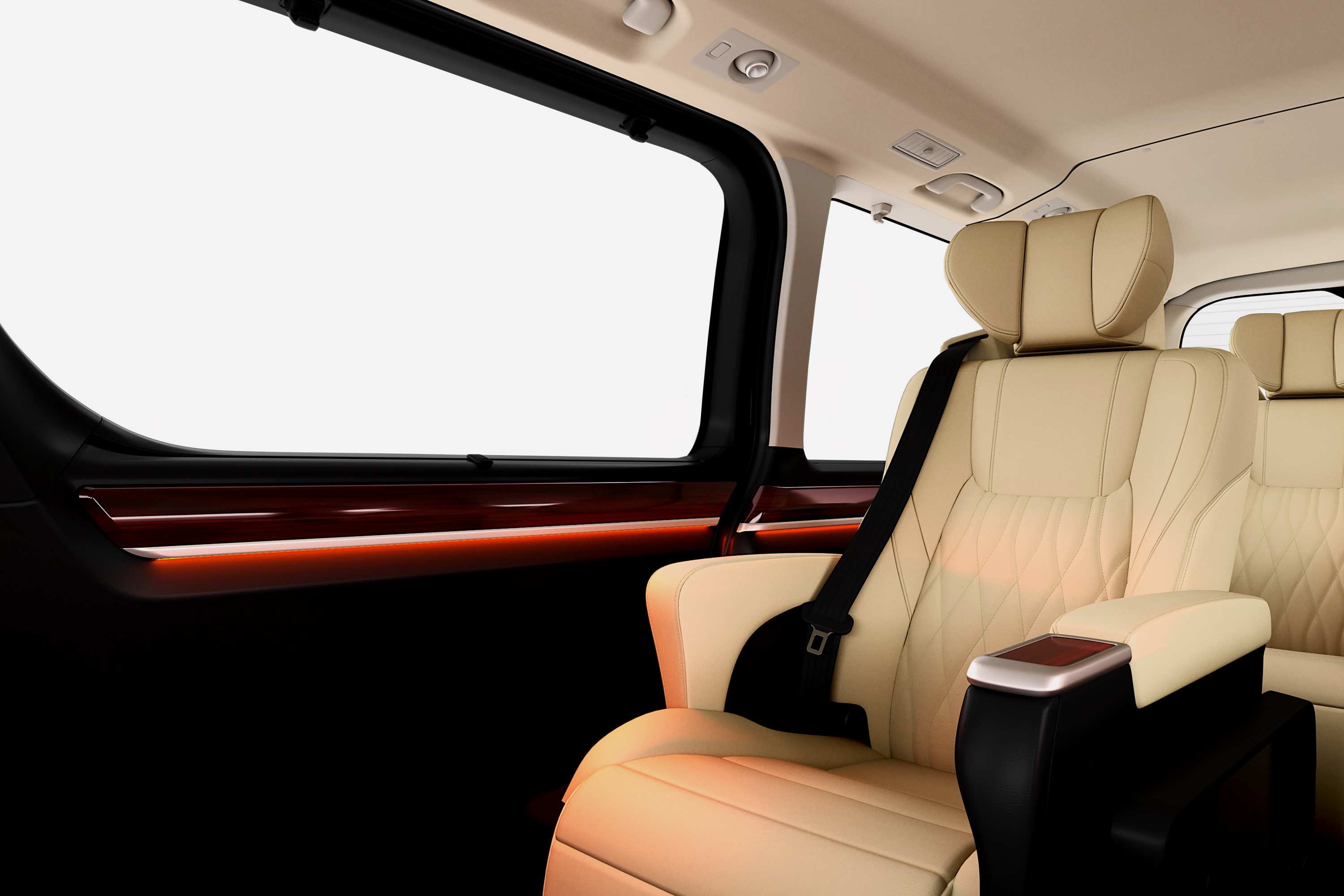 It’s quick enough to keep up with the frenetic commuter traffic off the mark, and will cruise quietly and ride softly at 100km/h.

The suspension is front MacPhersons with coils on a four-link system at the back, so is a unique set up to the Hiace’s rear leaf springs. There’s also disc brakes on all wheels.

Best of all, it practically turns on its own length with a turning circle of 12m – not bad for a van that’s 5.3m long.

The hydraulic-assist steering system – unusual in a new model that tends to go to electric-assist – is positive and well weighted for the city, and the steering wheel is neatly laid back so it never feels like you’re leaning over the wheel. Anyone who has driven a T1 or T2 (air-cooled) VW Kombi will remember that steering posture.

Fuel consumption is claimed to average 8.0 L/100km but the week-long test through mainly suburbia – and country roads and freeways and CBD crawls thrown in  – came to 10.5 L/100km. 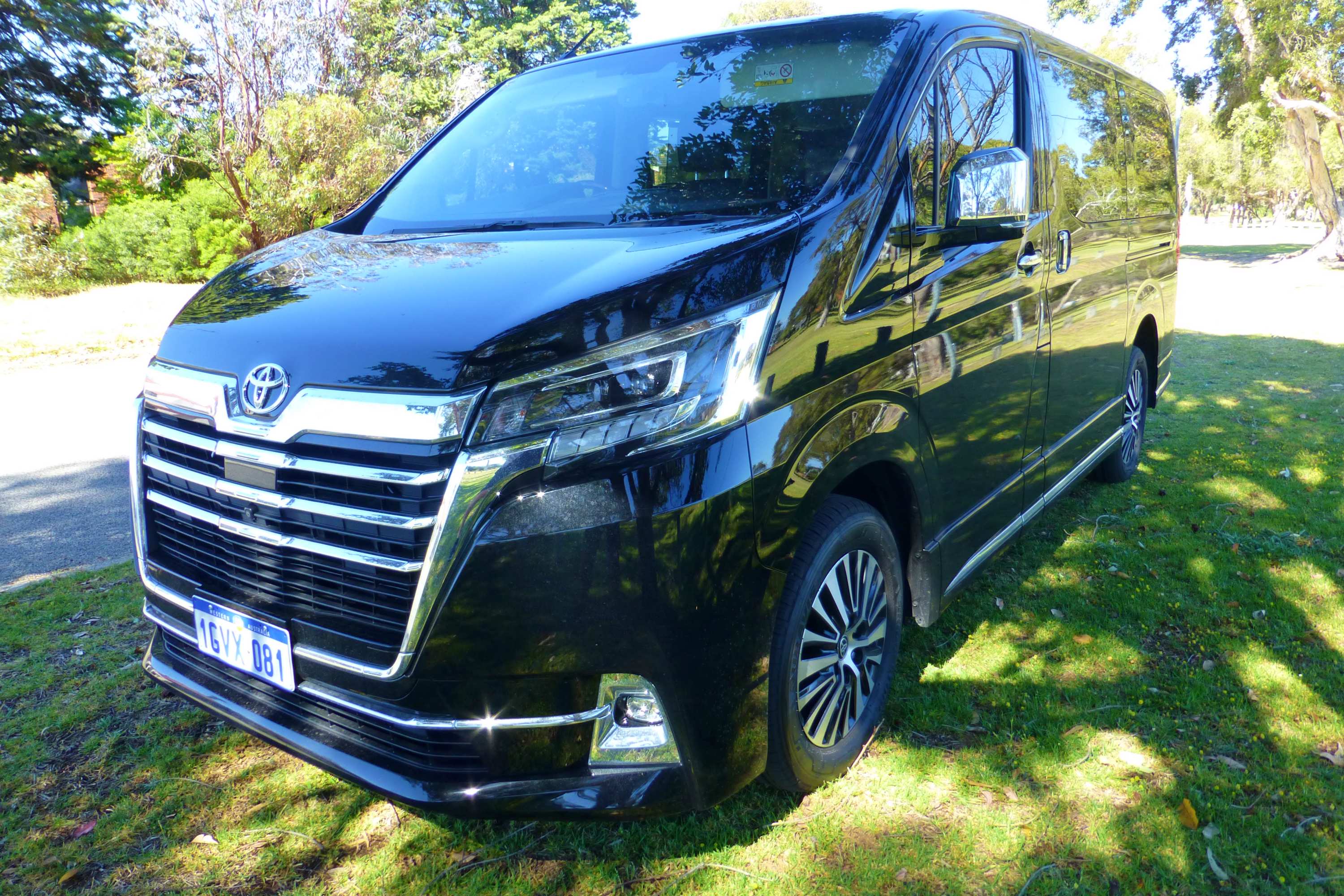 Van (er, people mover) safety is in a new era thanks to OHS and corporate due diligence in employee care. Standard is Toyota Safety Sense driver assistance feature including autonomous emergency braking (AEB) with pedestrian detection (day and night) and cyclist detection (day only).

The AEB operates on camera and radar sensors and alerts the driver first with visual and audible signals before plunging right in and whacking on the brakes itself. 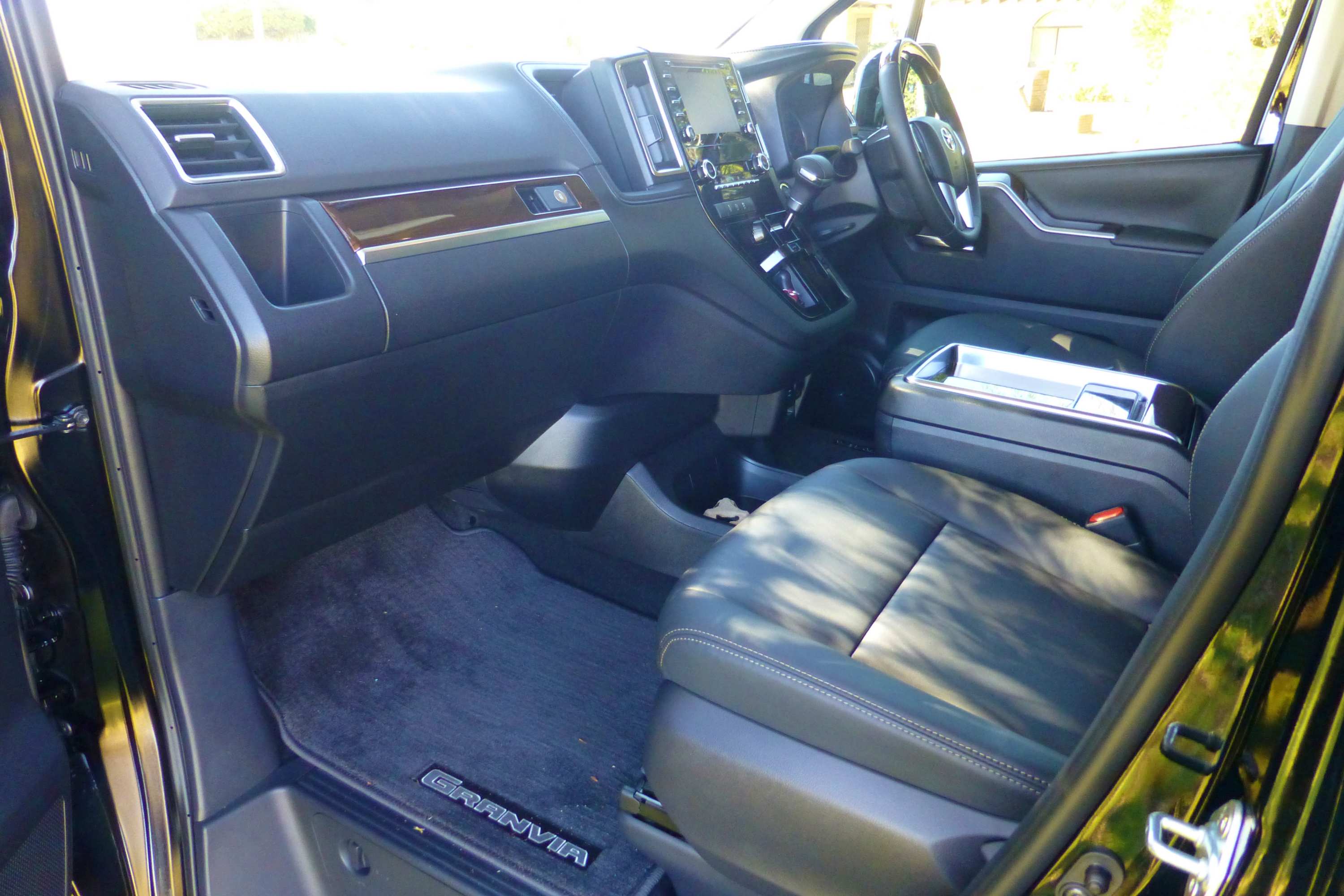 Who would have thought that a big box could be so much fun. The Granvia may be a van with a few more civilised features but one you get over its 5.3m length, is easy to drive and surprisingly manoeuvrable. The eight-seat option is best for families, though luggage space can be limited. It’s not so much a very good people mover as a fantastic delivery van. Would I buy one? Given the rivals, probably.

NOT SO GOOD BITS:

Who would have thought that a big box could be so much fun. The Granvia may be a van with a few more civilised features but one you get over its 5.3m length, is easy to drive and surprisingly manoeuvrable. The eight-seat option is best for families, though luggage space can be limited. It’s not so much a very good people mover as a fantastic delivery van. Would I buy one? Given the rivals, probably.

Toyota Supra GTS – “You can never have enough power” is a mantra often heard in car enthusiast circles and obviously, the words rang true at Toyota Head Office with their BMW-powered Supra. [Read More]

We set out to test the versatility of Toyota’s new flagship sports car, the all new Supra. They made a “halo” sports car, and by extension a true GT car.. Supra started with a modified Celica back in the late 70’s [Read More]

HiLux Rugged X is aimed at the recreational 4WD market, based on the SR5 dual cab 4WD model. It comes with a number of additional features that many buyers would add as aftermarket accessories. [Read More]