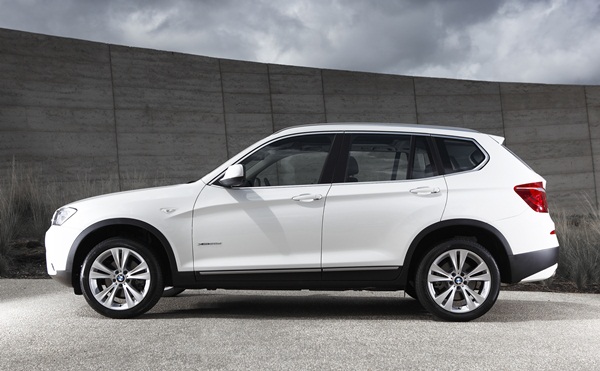 The new X3 xDrive 28i sees its previous six-cylinder engine replaced with the new four-cylinder engine featuring a twin-scroll turbocharger with VALVETRONIC, Double-VANOS camshaft control and High Precision Injection. Producing 180 kW from 5,000 rpm and 350 Nm across 1,250-4,800 rpm, the X3 xDrive 28i sprints from 0-100 km/h in just 6.7 seconds, an improvement of 0.2 seconds.

Now also featuring the fuel saving automatic start/stop function, the X3 xDrive 28i fuel consumption has improved by an amazing 1.5 litres to just 7.5 l/100 km, with CO2 emissions reduced by 35 grams to 175g/ 100km, which is identical to that of the X3 xDrive 20i.

While performance and consumption has improved, so too has the level of standard specification. Coupled with the addition of the automatic start/stop function the X3 xDrive 28i also receives business navigation as standard along with the X3 xDrive 30d, and the entire range is also now equipped with Driving Experience Control which includes ECO PRO mode.

* Manufacturer’s Recommended List Price is shown and includes GST and Luxury Car Tax (LCT) but excludes dealer charges, stamp duty, statutory charges and on-road charges which are additional and vary between dealers and states/territories. Customers are advised to contact their nearest BMW dealer for all pricing inquiries.

The BMW X3 xDrive 30d is the top of the X3 range and it is absolutely a favourite here at OzRoamer. 2014 will bring about an all new X3 however this review is based on the 2013 model. [Read More]

BMW Australia has announced a substantial boost to the standard specification of its highly-acclaimed BMW X3 model range, from April production 2013. [Read More]