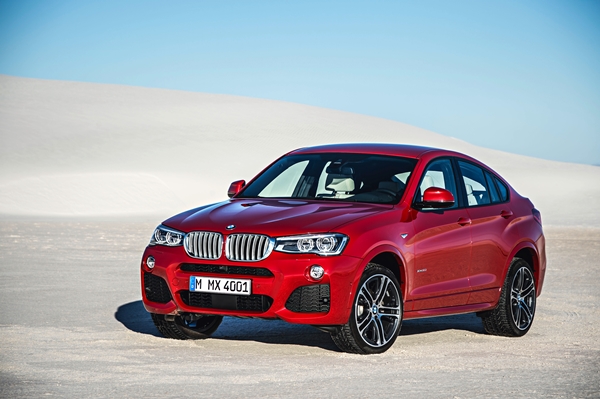 The booming mid-size premium crossover segment is about to take on a whole new character with BMW Australia today announcing details and pricing of the first ever Sports Activity Coupe (SAC) to enter this field, the BMW X4.

With signature BMW X features, unmistakable coupe character, a distinctive design and excellent dynamic ability, the BMW X4 is set to build on the success of the X6 by offering a unique vehicle in this segment.

“The X4 will follow in the footsteps of the X6 which has enjoyed unprecedented success worldwide by fulfilling the requirements of customers who desire premium motoring with a point of difference – a sporty, coupé styled SAV,” he said.

“And following BMW’s corporate direction, the X4 is packed with features and specifications, ensuring the vehicle offers outstanding customer value in addition to its extroverted styling and dynamic performance,” said Horton.

The new BMW X4 is based on the technical blueprint of the BMW X3, but displays a sporting character – and a generous level of standard specifications – very much its own.

Styling is a high point of the new BMW X4. The distinctive front face of the new model guarantees it is immediately recognisable as a member of the BMW X family: Light bands around the outer edges of the headlights are slightly flattened at the top and back and make for a broad appearance. The distinctive radiator grille surround in chrome and the large front air inlets underline the X4’s sporting potential. In profile, the low coupé-style roofline extending into the rear is a distinctive feature which also clearly sets the BMW X4 apart.

The generously sized interior of the BMW X4 combines sportiness and exclusivity with high-level functionality. Every BMW X4 comes equipped with 40:20:40 split fold rear seats which allows for a flexible luggage compartment capacity of between 500 and 1,400 litres. A storage compartment package with a range of handy storage and luggage carrying features is also standard. 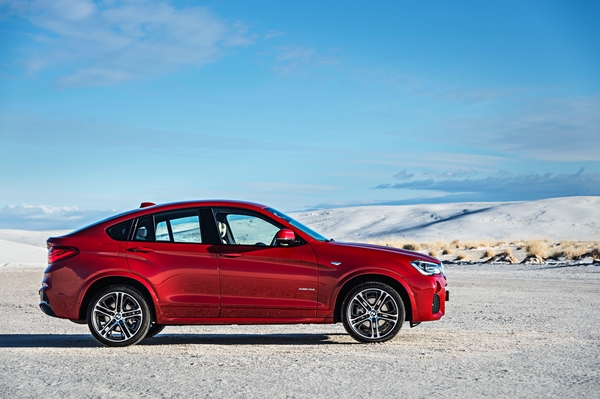 Every control element is angled towards the driver for optimal ergonomics. The xDrive status display identifies the BMW X4 as a member of the BMW X family.

Occupants in the BMW X4 enjoy an elevated seating position, with the front and rear seats only 20 and 28 mm lower respectively than in the BMW X3. This conveys a more sporty seating experience and comfortable headroom in the rear despite the roofline being 36 mm lower. The rear seat bench has two elegant coupé-style individual seats but still provides enough room for up to three passengers.

The BMW X4 will launch with four powerful engines – two petrol and two diesel units – all with BMW TwinPower Turbo technology. All of these engines excel with their tremendous revving ability, spontaneous power development and convincing refinement.

The entry level X4 xDrive20i and X4 xDrive20d are priced at $69,900 and $73,400, and offer exceptional levels of standard equipment, including a host of extra features (valued at more than $9,000) over their equivalent X3 models.

Standard features that highlight the dynamic credentials of the BMW X4 include Performance Control and variable sports steering, both of which combine to enable a higher level of dynamic cornering and handling with maximum grip, excellent directional stability and a very high degree of steering precision as well as comfort when parking.

The value story is similar with other variants in the X4 range.

The X4 xDrive30d, at $83,900 also adds Surround View with 360 degree visibility with help from cameras in the exterior mirrors, a wide-angle camera in front and the Rear View camera, exterior rear view mirrors with anti-dazzle and fold-in function, dual round exhaust pipes, 9-speaker 7-channel HiFi loudspeaker system and Dynamic Damper Control which can adjust the damper characteristics to suit the driving conditions and road quality and customer preferred settings.

Claiming its position at the top of the range at $87,900 is the X4 xDrive35i and as one would expect from the premier model of a Sports Activity Coupe it comes resplendent with features befitting its position and dynamic nature.

All new BMW X4 models’ maintenance requirements are controlled by BMW’s Condition Based Service (CBS) program which identifies the condition of a vehicle based on actual use, realising the full potential of a vehicle and minimising costs.

Under the CBS system, sensors and advanced algorithms monitor and calculate the conditions in which the vehicle is used including mileage, time elapsed since the last service, fuel consumption and how the vehicle is driven. The information captured is used to determine the vehicle’s maintenance requirements, indentifying that either an annual vehicle inspection or an oil service is due.

*Manufacturer’s Recommended List Price is shown and includes GST and Luxury Car Tax (LCT) – if applicable, but excludes dealer charges, stamp duty, statutory charges and on-road charges, which are additional and vary between dealers and States/Territories. Customers are advised to contact their nearest BMW dealer for all pricing inquiries

The BMW X3 xDrive 30d is the top of the X3 range and it is absolutely a favourite here at OzRoamer. 2014 will bring about an all new X3 however this review is based on the 2013 model. [Read More]

The BMW X3 Range Now Boasts All Turbo Line Up