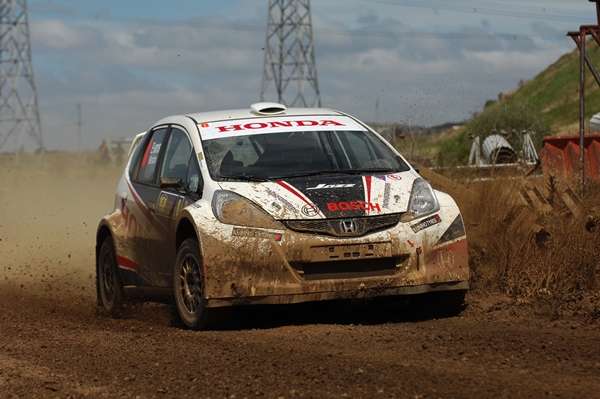 Team mates Eli Evans and Mark Pedder have given Honda an early 1-2 in heat one of the opening round of the Bosch Australian Two Wheel Drive Rally Championship, Rally Calder presented by East Coast Bullbars near Melbourne.

Evans and co-driver Glen Weston have remained steadfast on the top of the leader board after taking a conservative approach on the opening day of the Rally, an approach that paid dividends while Pedder and Claire Ryan finished the opening day in second after admitting to attacking a little too hard in the challenging conditions at Calder.

A surprise packet in the form of young Canberra driver Adrian Batten was third in the 2WD Championship at the end of the day after a fast but well thought out attack put the Ford Fiesta driver and his co-driver Tim Batten in contention for a podium placing.

Tearaway South Australian Jack Monkhouse and Dale Moscatt in a rear drive turbo Nissan Silvia were in second early before slipping to ninth after a small error but climbed up to fourth by the time the day was done.

The two Honda Jazzs have dealt with the Rally Calder conditions even better than leader Evans predicted.

“I knew the car was going to be strong but it has exceeded my expectations,” he said.

“This is a funny event, the one who’s made the least mistakes will win, it’s almost like a circuit race but on dirt – every move has to be prefect.”

The fight for the Bosch Australian Four-Wheel-Drive Rally Championship has seen three contenders dicing for the lead over the opening stages.

Box leads by just 7/10ths of a second at the end of day one from Boaden with Steve Shepheard a further 5.3 seconds back in third.

Prominent actor Shane Jacobson was steady all day finishing the first heat 14th in the 4WD Championship. Jacobson had slipped to as low as 16th over the eight stages but found time as he gained confidence in the latter part of the day.

Four times Australian Rally Champion Neal Bates making a return to the sport in the Australian Classic Rally Championship in his Toyota Team Europe Celica replica has had a day-long fight with Grant Walker in a Ford Escort RS1800. The Toyota driver led early but then had a time consuming spin before regaining the lead and then slipped back behind Walker after a small error at an intersection. Walker leads by 4 seconds at the end of the day with Jeff David in a Porsche 911 in third a further 14.1 seconds back

Polaris has controlled the inaugural stages of the Side by Side Rally Challenge with Cody Crocker and Greg Foletta at the top of the time charts and Polaris counterparts filling the next two positions.

Meanwhile in the opening round of the Australian Tarmac Rally Championship, Peter Gazzard and Mark Stacey set the pace in modern class with Stephen and Jobe Sims leading the Classic class.

More than 2.5 million Australians will see the Bosch ARC on TV in 2012 and the series will generate more than 36 hours of national television across the Ten/One HD network – a media equivalency value exceeding $6 million. The Bosch Australian Rally Championship has also re-signed multi-national fuel and lubricant giant BP as the primary fuel supplier and Korean tyre giant Kumho as the exclusive tyre supplier for the championship for the third year.

The opening round of the 2012 Bosch ARC, Rally Calder presented by East Coast Bullbars, is scheduled for March 1-4 at Calder Park in Melbourne with round two, the Quit Forest Rally in WA on March 30-April 1, round three, the International Rally of Queensland on the Sunshine Coast, on May 24-27, the Scouts Rally of South Australia in the Adelaide Hills from July 29-31 making up the fourth round, while round five, the Coffs Coast Rally will be run over the same roads used for Australia’s World Championship round at Coffs Harbour on October 13-14. The grand finale to the Bosch ARC will be Rally Victoria in Gippsland on November 9-10.

The Honda Jazz of Eli Evans and Glen Weston finished first outright in the two-wheel drive category at the end of an action-packed Rally Calder this weekend. [Read More]