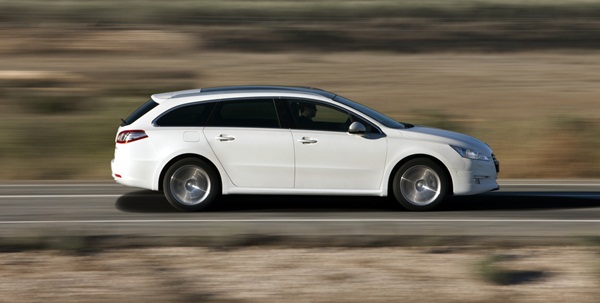 The 2.2-litre diesel engine is only available in GT models while the 508 Allure and Active models have either the 1.6-litre e-HDi engine, 2.0-litre turbo diesel or 1.6-litre turbo petrol.

Specification and options for the all-new 508 GT Touring are in-line with the GT Sedan with the exception of the electric tailgate which is available as a $1000 option on GT Touring as well as Allure Touring.

* Prices quoted are the Manufacturer’s List Prices (MLP), inclusive of Luxury Car Tax (LCT) at the rate of 33%, and excluding dealer delivery charges. LCT is payable on all vehicles with a total purchase price, including the price of factory & dealer fitted optional extras & dealer delivery charges, above $57,466. This is a manufacturer’s list & new vehicles must be purchased from dealers. Specifications & pricing are as planned for Model Year 2012 and subject to change without notice or obligation

Peugeot 508 GT Sportswagon – The large car and wagon segment has unfortunately been in decline over the last few years, replaced by the seemingly unstoppable swing towards SUVs. However there are some great cars left [Read More]

The MY 20 Peugeot 508 handsome, very handsome indeed. Peugeot 508 comes in a single trim level, the GT, with a fastback and Sportswagon to select from. [Read More]

Wagons fight back against the SUV surge.

With the increasing dominance of SUVs in sales figures it’s good to see some wagons still available on the market. VW has just released the Passat 206 TSi 4 motion R Line wagon. A mouthful for a lot of car. [Read More]