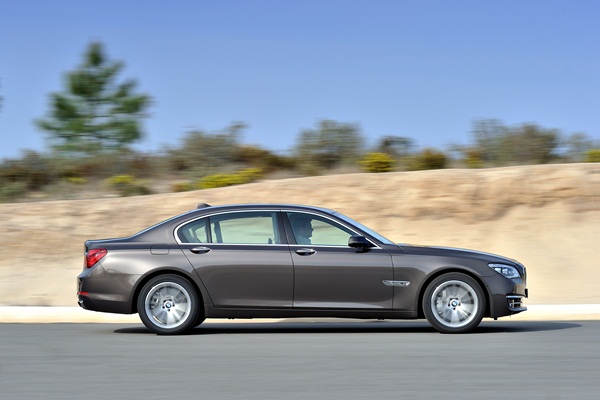 The new BMW 7 Series is set to reinforce its position as the most innovative sedan in the luxury segment. The flagship model series of the BMW fleet embodies sporting elegance, refined powertrain technology and luxurious comfort in equal measure. And now, by making a clear step up in terms of product substance, the Sedan is set to underline its leadership. New LED headlights, an upgraded interior with optimised soundproofing, markedly improved ride comfort, a comprehensive selection of optional equipment and state-of-the-art safety technology combine to create an in-car experience from the top drawer. A line-up of either new or optimised drive systems, including the world’s most powerful six-cylinder in-line diesel engine and the second-generation BMW ActiveHybrid 7, set new performance and efficiency benchmarks.

The new BMW 7 Series Sedan will hit the ground running in 2012 armed with new and comprehensively revised engines which are extremely economical and low on emissions and channel their power to the driven wheels through an intelligent eight-speed automatic transmission. Technology such as the Auto Start-Stop function, Brake Energy Regeneration and the secondgeneration Driving Experience Control switch with ECO PRO mode and coasting function pave the way for additional fuel saving.

Alongside the flagship BMW 760i with its 12-cylinder powerplant and the entry-level engine in the BMW 730i (not available in all markets), customers can choose from the new six-cylinder in-line engine powering the BMW 740i and the revised V8 petrol engine earmarked for the BMW 750i. The six-cylinderdiesel engines in the BMW 730d and BMW 740d likewise offer drivers the combination of increased output and lower fuel consumption. Making its debut, meanwhile, is the new BMW 750d xDrive. Under its bonnet lies the new TwinPower Turbo six-cylinder diesel engine – the world’s most powerful diesel engine of its kind. Rounding off the range is the second-generation BMW ActiveHybrid 7 with a new six-cylinder in-line engine and significantly reduced emissions.

An impressive spread of chassis wizardry helps give the ride comfort of the BMW 7 Series Sedan a noticeable boost. Complementing the optimised chassis set-up – with modified rubber bearings and new dampers – and the self-levelling air suspension for the rear axle is the standard-fitted Electric Power Steering. State-of-the-art electronic control systems with likewise retuned software help to enhance the long-distance attributes of the BMW 7 Series Sedan and ensure that the new edition of the car makes travelling on board even more pleasurable – in terms of both dynamics and comfort.