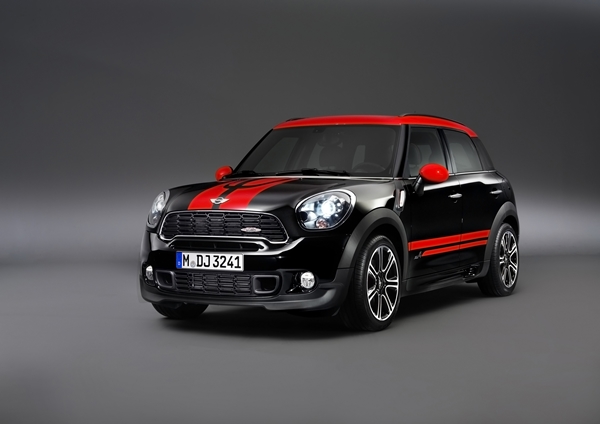 A portfolio of six models and three new takes on familiar themes allow MINI to welcome visitors to the International Geneva Motor Show 2012 with a spread of models unprecedented in the brand’s history. The show, taking place from 8 – 18 March, will therefore see the one-off among premium small car makers confidently extending its growth curve into 2012. The latest developments in the model range, which now comprises a total of 41 variants, create even greater scope for customers to experience the hallmark MINI style and unsurpassed driving fun of the brand’s cars in their own individual way.

This is the first John Cooper Works model to also offer a six-speed automatic gearbox as an option.

Another world premiere from MINI shifts attention to an all-new concept designed to win over new target groups. The MINI Clubvan Concept embodies the vision of a premium small car with increased transportation capacity for business and leisure use. It differs most prominently from the MINI Clubman, on which it is based, with its two-seat layout, large and flat load compartment, and opaque rear side windows.

Visitors to the International Geneva Motor Show 2012 will also be treated to a first look at three new interpretations of established models. The MINI Baker Street embodies the youthful, fresh and innovative trendsetting style of the brand, while the MINI Bayswater focuses primarily on the sporting verve and agile handling for which MINI is renowned. The third member of the trio, the MINI Highgate Convertible, exudes an exclusive aura and displays a modern interpretation of British style.

Opel, General Motors’ aspirational European brand, is set to enter the Australian market in late 2012. The Australian portfolio will include the new generation Opel vehicles Insignia, European Car of the Year 2009, award-winning Astra and the recently upgraded Corsa [Read More]

The legendary MINI line-up in Australia has just received a performance boost with the arrival of the final models to complete the John Cooper Works range. To the delight of MINI fans right across the nation, every MINI model – including MINI, Clubman, Coupe, Cabriolet, Roadster, Paceman, Countryman and GP – now includes a John Cooper Works, or JCW, variant [Read More]