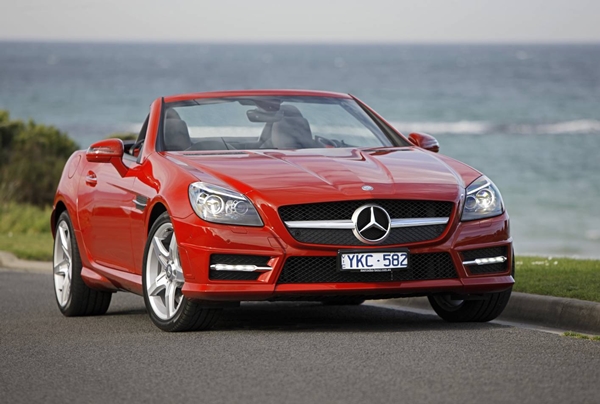 The Mercedes-Benz SLK Roadster is in its third generation. To celebrate its 125th anniversary year in 2011, the SLK has been given a classic look, resembling the legendary 190 SL from the 1950s which is regarded by many enthusiasts as being the original ‘SLK’. The SLK has always been one of the most interesting cars when it comes to new technology: the first SLK (1996) had the first ever hard folding roof that could be opened and closed by the touch of a button. The second generation in 2004 brought us ‘Airscarf’ – a heating system to warm your neck and shoulders when you had the roof down. This latest model brings us the option of Magic Sky Control that switches the glass roof to light or dark at the flick of a switch. Can this new piece of hi tech gadgetry and new driving dynamics of the SLK is enough to worry Porsche’s Boxster and BMW’s Z4? Have they done it?

Behind the wheel
The interior has been refreshed but the dash is awash with buttons from the entertainment controls to the seat heaters. A system like BMW’s i-drive would de-clutter the dash and free up more space. However, the quality of materials is high and the dash is soft to touch with an upmarket feel to it. So high quality is the order of the day for this baby including a multifunction sports steering wheel with a flattened lower section and a thick leather rim. 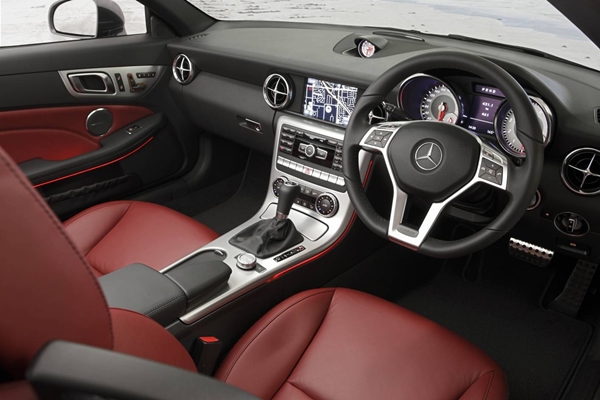 Performance
Two petrol engines are offered on the SLK Roadster. Pick of the bunch for enthusiasts is the 350 – it has pace from the start and bags of power right the way through the range. The V6 engine in the SLK 350 generates 225 kW from its 3498 cubic-centimetre displacement, using this power to accelerate from 0 to 100 km/h in 5.6 seconds. Its consumption is 8.3 litres (combined) per 100 kilometres (194 g of CO2 per kilometre). The V6 engine has been completely newly developed. Its most important hallmarks are 3rd-generation direct injection, piezo injectors and multi-spark ignition and it is an absolute cracker. 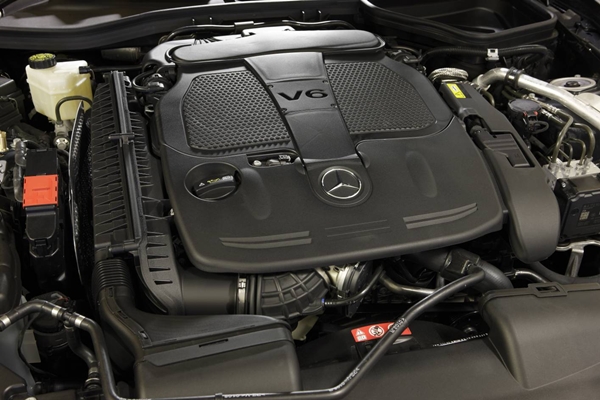 Handling
The SLK has improved but the BMW Z4 is better for pure driving enjoyment. The SLK feels agile and quick but you never get the sense that you are at one and connected to the road like you are in a Z4. The electrically assisted steering is too light and limits driving pleasure. If you only want to cruise along the highways then this is the car for you. It is a vast improvement on its predecessor. On the twisty and tight stuff there’s plenty of grip when cornering. You can make the experience more involving (throttle is sharpened) by choosing the ‘Sport’ mode over ‘Comfort’ but the downside is (still) the lack of steering feel. 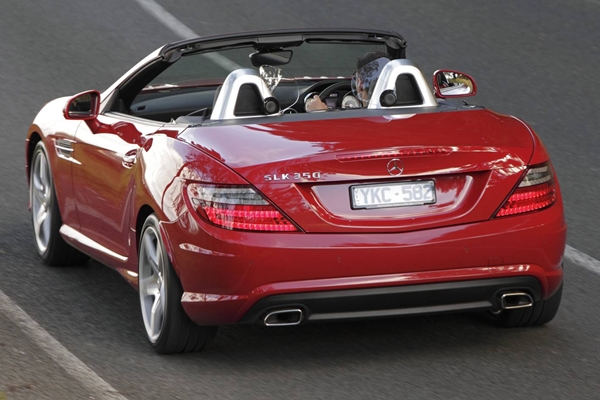 Comfort
Roof down or up the SLK is one of the most comfortable roadster cockpits to sit in. Fold the roof flat for open-top motoring and you’ll be surprised – the cabin is virtually draught-free and if you flick the optional Airscarf (heating vents built into the neck of the seats to warm the air around your head) you’ll feel basically no wind chill. Close the roof and the car is well insulated from the wind, tyre and road noise. Ride comfort is very good as the SLK soaks up bumpy surfaces with ease as long as you are driving with the normal suspension – the optional sports suspension will give you a firmer ride and will not feel as pleasant over the bumps. Visibility is quite good from the front but close the roof and you will find that the rear window is rather small and your view restricted, especially when parking.

Practicality
Load space has been increased. The second generation had a load space of 208 litres with the roof down while this version gets 225 litres. Close the roof and the boot expands to 335 litres – that’s 35 litres more space than that offered by the previous generation. Whether you have the roof down or up, there is enough space for a couple of weekend bags for you and your passenger. 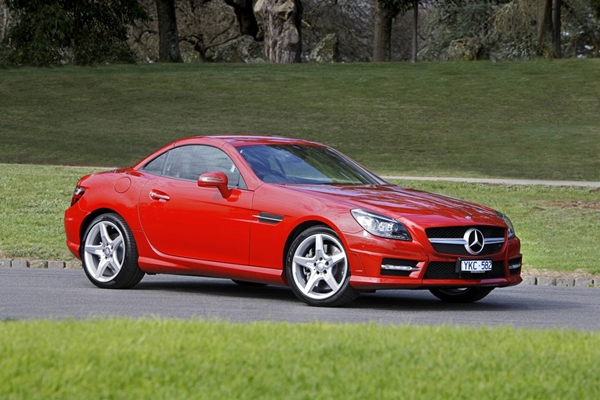 Equipment
As you would expect in a luxury roadster it is packed with plenty of standard kit and you fare quite well with the SLK Roadster. Standard equipment includes alloy wheels, LED daytime running lights, entertainment featuring 5.8-inch colour screen, Bluetooth connectivity and USB port, radio, six-disc CD changer, electric hydraulic roof and stop/start function etc. . Check out the Mercedes-Benz website for a full list of standard kit and available options.

Safety
Safety is high on the SLK Roadster. Standard kit includes Attention Assist. This monitors 70 parameters to ensure driver alertness. Active Bonnet improves pedestrian safety and can be reset by the driver. Pre-Safe is anticipatory occupant protection system that prepares the cars safety systems if it thinks a crash is imminent. Optional safety systems include Brake Assist Plus and Pre-Safe Brake included with optional Distronic Plus and Intelligent Light System and Speed Limit Assist. Euro NCAP has not rated the car yet but we expect that the SLK achieve at least a four-star rating just like its predecessor. 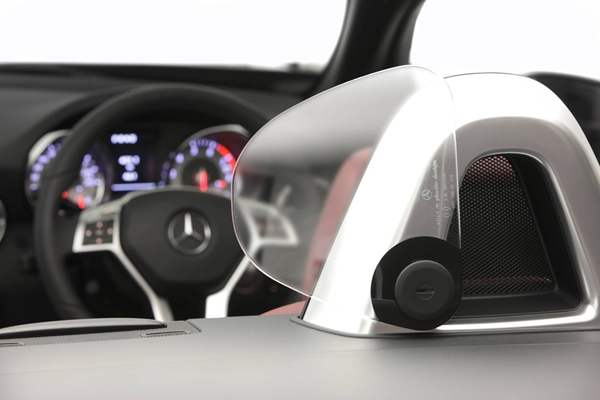 Summary
The SLK is naturally up against sportier cars bought either for their ability or simply as status symbols, like the Porsche Boxster. The SLK doesn’t drive as well as a Boxster, but it doesn’t look like an upturned bathtub either. At the lower end of its price range you could instead go for a Nissan 370Z or an Audi TT or, for more cash of course, a BMW Z4. Any bloke over 40 just looks silly in a roadster that doesn’t have the “look”. A Nissan 370Z is the hairy-chested and butch of the bunch, the Z4 also has the “look” and offers the widest choice of engines and transmissions, including autos for the ladies and the softies and it does have an electric folding hard top, but it isn’t a Mercedes. So, does the SLK, have the niche market completely sewn up? Well no, having lifted its game dynamically, Mercedes-Benz, has gone Beema hunting big time with the latest SLK 350 glamor and BMW should be worried as the SLK 350 is now giving the BMW Z4 a closer run for its money.

What is good and not so good?
What is good?
Improved driving dynamics
More efficient engines
Larger boot
Impressive exterior design
Improved fuel economy,
Better performance numbers
What’s not so good?
Poor rear visibility
Not as much fun to drive as a Z4

Mercedes-Benz Australia has announced pricing for the 2015 B-Class. In terms of both design and technology, the second generation of the B-Class has heralded a new compact class era at Mercedes-Benz, [Read More]