With the Kia Stinger GT, the marketing brains at Kia are either brilliant or the luckiest people alive.

Imagine introducing a 4 door executive hatch with stunning performance and the ability to carry 4 Australian adults in comfort and luxury.

Well imagine that this was a rear wheel drive performance sedan style and it was introduced around the time when both Holden and Ford abandoned the segment and punters were looking for anything to replace the Commodore SSV and Falcon GT.

Imagine introducing this vehicle at around $55,000

Imagine no more. Kia introduced the Stinger, in what may prove to be a master stroke of timing. 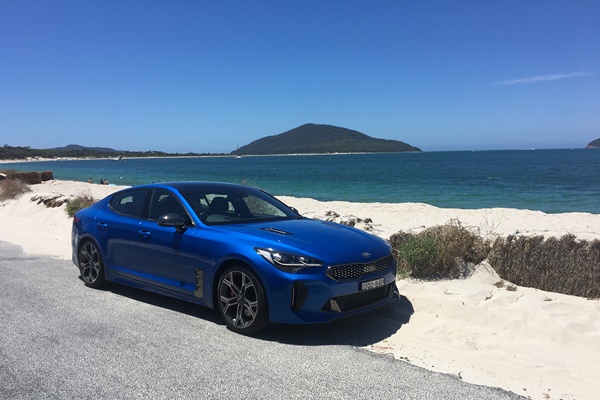 We had the luxury of trying out the Stinger 3.3i GT for a weekend trip to Hawks Nest on the mid NSW coast. Passengers included myself and my partner and our two best friends.

Four 20 something adults, that packed way too much luggage for a weekend and the blokes being typical blokes, both around 180cm.

It was midday Friday and it didn’t take long to appreciate the hatch design of the Stinger. If this was a normal sedan we never would have fitted all the luggage. I told everyone to pack light, but I guess they didn’t listen.

With a bit of careful tetras packing, learned over many years of outback travel, we managed to fit all the bags in the boot and the hatch even closed. 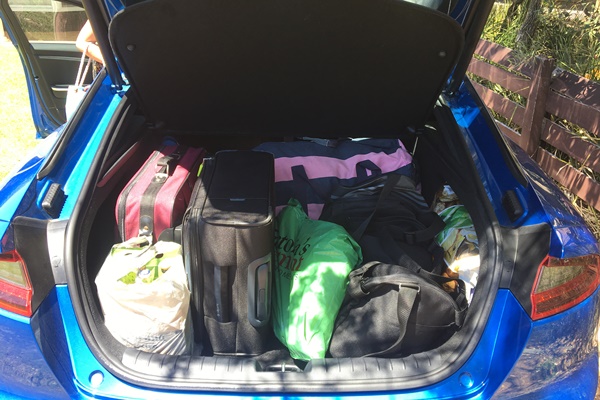 We were trying to get away before the dreadful Friday exodus north, south, west and probably east out of Sydney. We didn’t make it and got stuck in the car park they call Pennant Hills rd.  Luckily we hooked up the Bluetooth and had plenty of great sounding music to soothe the nerves.

Great stereo by the way Kia! 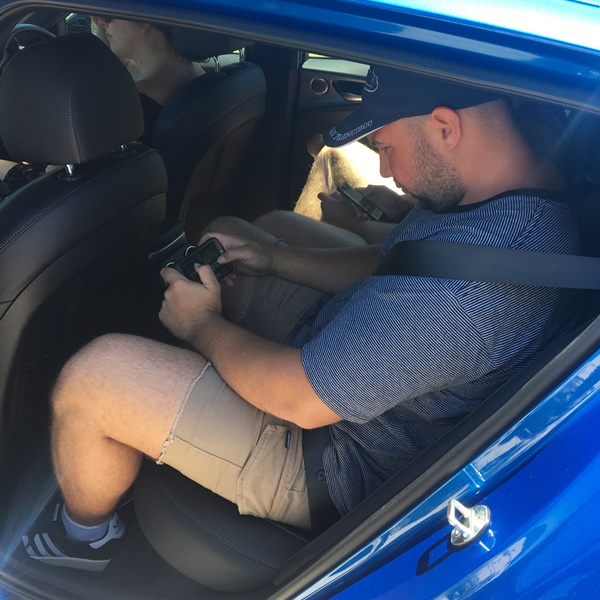 Given the fact that I have been driving since I was around 9 years of age, and Olivia the other female on the weekend is a part time rally driver, we decided that it was a girls driving weekend only. The boys missed out. This did lead us to discover the second pleasant surprise of the weekend. Sitting, well stuck, on the Friday crawl out of Sydney, the boys were both in the back seat.

Being beefy blokes they were hesitant at first to be relegated to the back seats, but after a very short while they stopped complaining and decided that there was plenty of room back there. They were actually really comfortable. 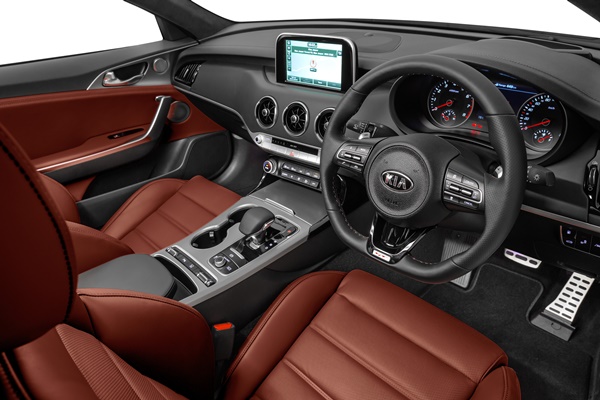 So with the music playing, the boys with no complaints, we continued on what turned out to be a near 4 hour drive to Hawks Nest.

Once on the freeway, the traffic was moving at a reasonable pace. Overtaking, when we could, was a breeze and the Kia Stinger with its 3.3L Turbo petrol purred along. With 272kW and 510Nm of torque, the driving was relaxed. I couldn’t believe that all that torque was available from around 1300rpm. 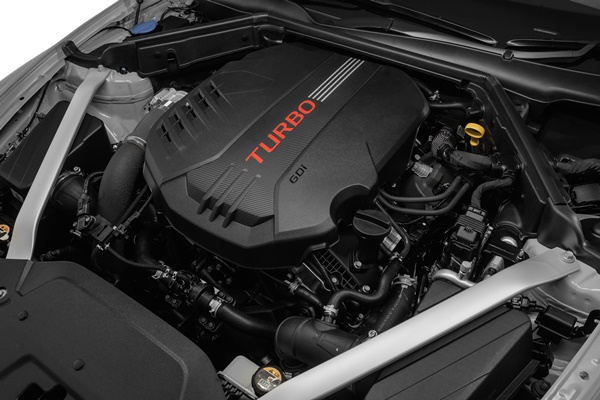 We could scoot along on cruise control, barely raising a burble from the exhaust. Surprisingly we averaged around 8.4L/100K and on a couple of occasions on the freeway, even going as low as 7.1L/100K.

I really had to question that this was a performance petrol engine, not a lazy diesel. It was so relaxed and easy to drive. Any question we had was answered when we needed to get away from a wandering truck that threatened to side swipe us from out of nowhere. 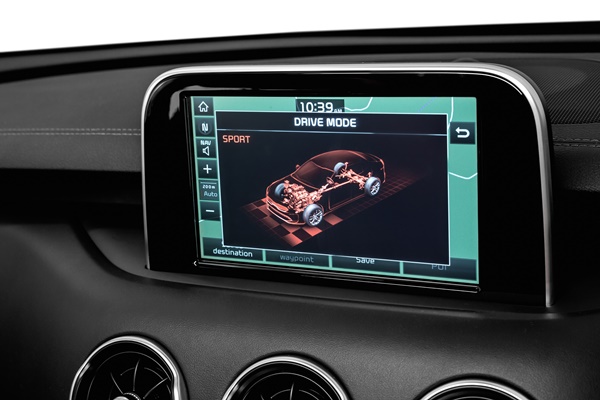 Planting the right foot we felt the full acceleration of the Stinger. It literally pushed us back into our seats and took us to safety in the blink of an eye without fuss.

Had the acceleration of the Stinger not been available we would have been clipped for sure.

Arriving at Hawks Nest late Friday, we settled for a relaxing and enjoyable weekend. Thankfully the weather was awesome and a weekend of swimming, occasionally with local dolphins, short drives and long walks, lazy breakfasts and eating way too much and general relaxing was the go. 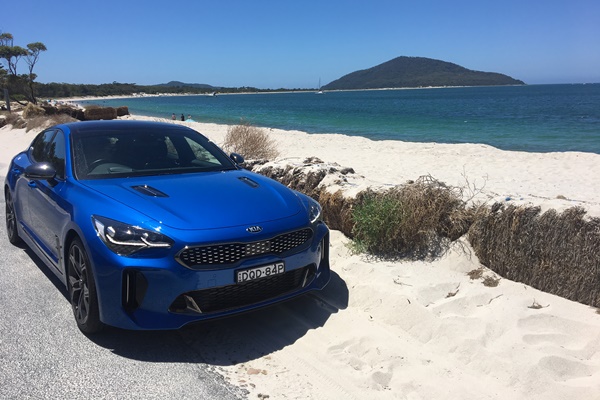 As an aside, the stunning blue colour of the Stinger blended right in with the white sand and blue of the ocean and Port Stephens.

Around town we averaged about 13.5l/100k and probably could have done better, but we did enjoy the sound of the exhaust when we hit the accelerator, so we probably were a little excessive.

It seemed as soon as we arrived, Monday came around, and we had to head home again.

So we embarked on the tetras packing fiasco again, all fitting in the surprisingly large boot area.

By this stage the boys were used to being back seat passengers, actually enjoying it. As a family you could easily fit three smaller children back there and mom and dad still get to drive a cool looking performance executive hatch. 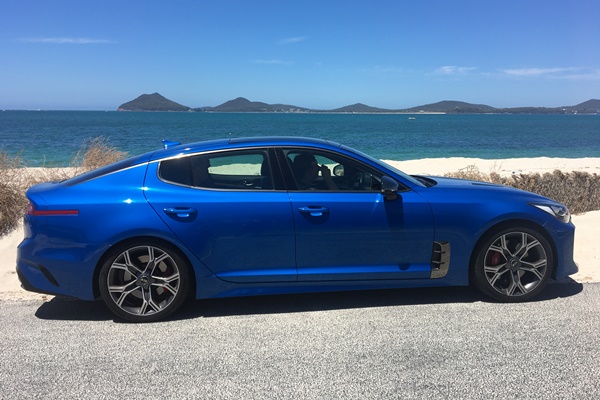 On the freeway going home, there was almost no traffic. We took advantage of sections of the freeway where there was no one around.

We would slow down and then have some fun with the acceleration of the Stinger.

To feel the rush and hear the exhaust burble was just plain FUN!

We arrived home late Monday evening feeling just a little flat, as you do when you come back from a weekend away. But this time we also felt flat because we had to give the Stinger back to Kia the next day. However the weekend was awesome.

So what did I learn about the Kia Stinger over the week we had it? 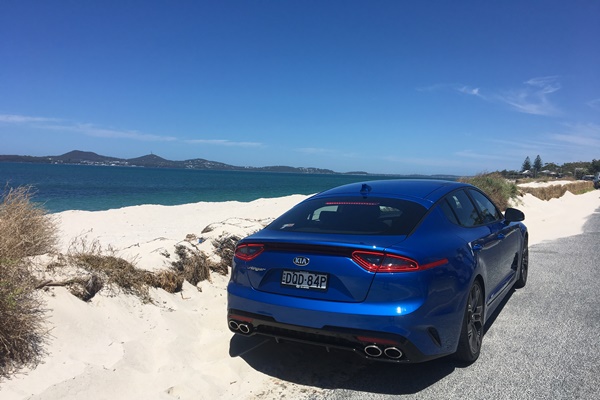 Kia has hit an absolute winner with the Stinger. On the way to taking it back to Kia we passed a Maserati Quatroporte S. It struck me then just how good the Kia Stinger is. It looks just as good as the Maserati. Goes just as fast, is probably roomier, yet has the warranty and reliability of the Kia. The big factor is that the Maserati costs 4-5 times more than the Kia.

We had the luxury of trying out the Stinger 3.3i GT for a weekend trip to Hawks Nest on the mid NSW coast. Passengers included myself and my partner and our two best friends. Four 20 something adults, that packed way too much luggage for a weekend and the blokes being typical blokes, both around 180cm.

About Brianna Fraser 25 Articles
Brianna has been driving a different car every week since she got her learners permit. Now writing and doing videos for us she is also qualified in the Hospitality, Beauty and Child Care industries but still finds time to be our resident gourmet chef. She provides the most magnificent meals when the mood takes her. Her camp oven damper made at Ute weekends and camping trips has to be tasted to be believed. In addition to that, she has a particular affinity with off road driving and has been driving since she was 9 years on the same farm as Rob learned to drive on. Unusually for one so young she is exceptionally competent with off road driving, keeping up with drivers that many more years experience. Brianna is currently compiling her own bush cook book along with her other business interests.

The A3 has proved to be a very popular choice with buyers and important to Audi and the third generation mid-life cycle update adds value and style to an already impressive offering. [Read More]

Amarok is best for the active weekender, tradie, or anyone with a bunch of stuff to tote around. It’s not really for towing or solid off road work. [Read More]

Ute based wagon variants have become very popular and yet another of these, the unfortunately named Toyota Fortuner Crusade is based on the Hilux chassis, with heavy modifications to make it more car like for family buyers with genuine 4WD credentials. [Read More]