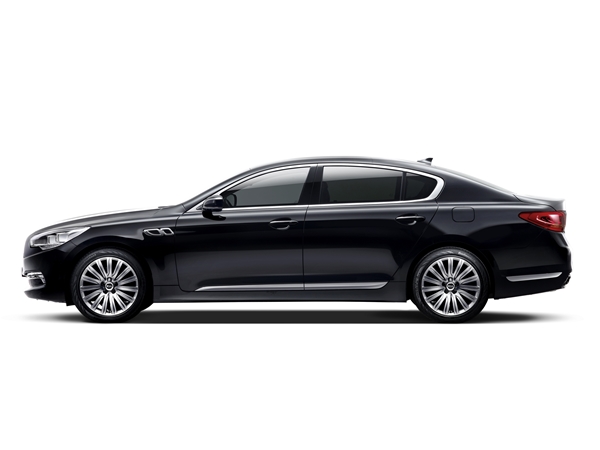 Kia today revealed the first official photographs of its all-new flagship sedan to be launched during the first half of this year in the Korean market. Referred to by its codename ‘KH’ until now, the company also confirmed that the Korean market name will be ‘K9’ – while the name for export markets, as well as overseas launch timings, will be revealed later this year.

K9 is Kia’s first rear-wheel drive sedan. It boasts Kia’s ‘best of the best’ design, driving performance and high technology capabilities and is regarded as one of 2012’s most eagerly anticipated all-new models in both Korean and overseas markets.

The letter ‘K’ represents not only Kia and the company’s home country of Korea, but also refers to the Greek word ‘Kratos’ (meaning powerful, domination and reign) and the English word ‘Kinetic’ (meaning active, dynamic).

The ‘K’ series trio of sedans is a strong statement of Kia’s determination to offer consumers the broadest product line-up and establish itself as a major presence in the global automotive industry through ceaseless innovation and technological developments.

The K9’s exterior gives solid form to the recently released sketches of the new model, and presents its design concept, ‘high-tech luxury sedan’ image, with futuristic, sophisticated and distinctive charisma.

Furthermore, the sophisticated and bold profile with its simple but strong character line and the innovative and stable rear view with its high-tech LED combination lamps, luxurious chrome garnish and bumper-integrated muffler, completes the parameters for whole new level of luxury car design.

Soon-Nam Lee, Director of the Overseas Marketing Group, said, “K9 is our first rear-wheel drive large sedan, created without compromise in its design, driving performance and new technologies. K9 sets a whole new level of standards and values in the large sedan segment, and its design will be another Kia demonstration of our brand’s power to surprise the world.”

Kia Quoris Flagship Sedan – will it come to Australia

Kia’s striking, rear-wheel drive, all-new flagship sedan will be called ‘Quoris’ when it goes on sale in overseas markets from the fourth quarter of this year. The new luxury model features a host of high-tech comfort and safety features, many of them never seen before on a Kia. [Read More]