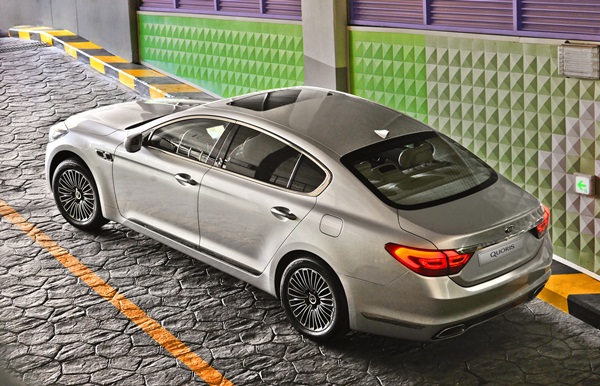 Kia’s striking, rear-wheel drive, all-new flagship sedan will be called ‘Quoris’ when it goes on sale in overseas markets from the fourth quarter of this year.

The new luxury model (known as ‘K9’ in the domestic market) went on sale in Korea in early May, and features a host of high-tech comfort and safety features, many of them never seen before on a Kia.

“Derived from the English words ‘core’ and ‘quality’, the name of our new flagship sedan hints at the attributes at the very heart of the vehicle,” commented Thomas Oh, Kia’s Executive Vice-President & COO of the International Business Division. “The word ‘Quoris’ conveys solidity, luxury and high-technology, all resonating together as a chorus.

“Our decision to give this striking new sedan an unconventional name means it will stand out even further from the established crowd, driving Kia sales in what is a new segment of the global automotive market for Kia,” adds Mr Oh.

“The Quoris can cruise at a desired speed, maintain a pre-determined ‘safe’ distance from the vehicle in front, and even come to a complete stop if necessary. Quoris can also detect and warn the driver of approaching potential hazards using innovative audio, visual and haptic alerts.

With ASCC activated, the Quoris monitors traffic conditions and speed in order to maintain a pre-determined safe distance from the vehicle ahead. The driver can easily adjust this distance by choosing from four options (52, 40, 32 or 25 metres at a speed of 90 km/h) using a button on the steering wheel.

Integrating the control of various vehicle monitoring systems, including the Electronic Stability Control (ESC), seatbelt mechanisms and multiple warning systems, the AVSM can alert the driver, pre-pressurize the braking system and activate the Pre-Safe Belt (PSB) system, depending on the anticipated level of a collision risk.

Detecting a risk of a collision, AVSM warns the driver in three stages via a loud audible alarm, a visual warning on both the Head Up Display (HUD) and TFT LCD cluster and a haptic signal on the seatbelt.

Stage 1 At a low level of collision risk, a visual warning appears on the LCD cluster and HUD.

Stage 2 At a higher level of collision risk, in addition to the visual warning, an audio warning signal is sent out and the haptic seatbelt is activated via an electric motor, sending strong vibrations through the driver’s seatbelt.

Stage 3 When a collision is imminent, the AVSM automatically applies the brakes to reduce the impact speed. The electric motor and pre-tensioners of the PSB system are also activated to retract the seatbelt and hold occupants closer to their seats, ensuring maximum occupant protection and minimizing abrasions caused by contact with the airbags.

Class-leading Blind Spot Detection with Lane Change Assistance
The Blind Spot Detection (BSD) system for Quoris features two radar scanners located in each of the outer corners of the rear bumper. Each is capable of detecting objects up to 70 metres away from the rear, and four metres from each side.

Activated at vehicle speeds above 30 km/h, BSD gives the driver a warning when a vehicle comes into the blind spot zone – an area approximately four metres wide along each side of the Quoris and extending more than six metres from the rear bumper.

Compared with sonic-based BSD systems, Quoris’ radar-based BSD gives a longer detection range, which is also exploited by the Lane Change Assistance (LCA) system. LCA alerts the driver to vehicles approaching from the rear at high speeds from up to 70 metres away.

If the system also considers the speed of approach to be a potential hazard – specifically if it calculates that a collision would occur within 4.5 seconds if no avoiding action is taken – it will illuminate a warning triangle graphic in the left or right door mirror glass and activate a warning signal on the HUD. If the driver does not react to this visual ‘alert’, an audible warning is also sounded.

Both the BSD and LCA systems can be deactivated by the driver, if required.

Lane Departure Warning System
While radars boast a superior ability to detect objects at long distances, cameras are used in Quoris to recognize the shape of closer objects such as lane markings.

A forward-facing video camera is at the heart of the new sedan’s Lane Departure Warning System (LDWS). It monitors the car’s position in relation to lane markings and triggers a warning in case of unintended lane departures at speeds above 60 km/h.

Unlike the majority of competitors’ AVM systems with a field-of-view of less than 270-degrees, the Quoris’ system offers a true 360-degree all-around view in eight different viewing modes, displayed on the Audio Video Navigation (AVN) monitor.

Continuously synthesizing images from four cameras, the AVM provides a virtual ‘top’ view in motion, so the driver can easily have a full grasp of all his or her surroundings, maximizing safety for the car occupants as well as pedestrians. The AVM system automatically deactivates at speeds above 20 km/h.

Kia Motors Australia COO, Tony Barlow, said that while the technology in the Quoris is impressive and exciting it was not an immediate priority for Australia.

“Kia Motors Australia currently has no plans to import the Quoris but will continue to monitor the local market and can revisit that decision should it become and appropriate option,” Mr Barlow said.

Kia is set to show the market that it has launched into a new era with the 2012 Kia cee’d. Featuring a completely new interior hallmarked by a more premium look and feel, higher perceived quality, improved switchgear, touch-screen technology and enhanced driving position ergonomics, the Kia cee’d is certain to make heads turn. [Read More]