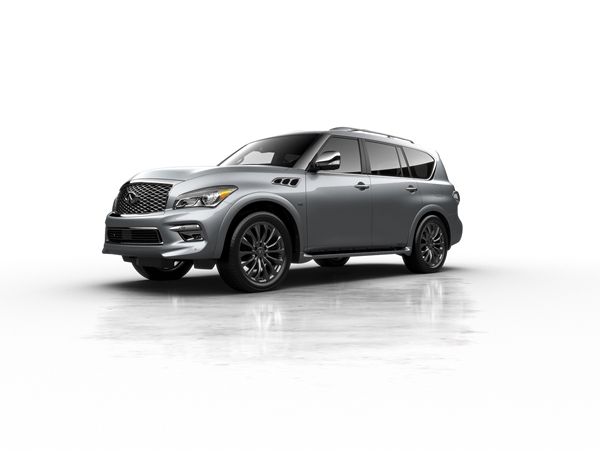 Infiniti today announced that its QX80 premium SUV will join the brand’s Australian model line-up and will be on sale in dealerships from later this month.

Luxurious and sophisticated, the QX80 is the premium brand’s range-leading, full-size SUV and its arrival in July will herald the start of Infiniti’s next phase of new-model releases in Australia.

The Infiniti QX80 has a bold exterior design. Its unmistakeable presence comes from a combination of size and styling that conveys an underlying sense of power and strength. Its exterior matches a sumptuous interior that is abundant in comfort with space for up to eight people in a two-three-three seating format.

Powering the Infiniti QX80 is a 5.6-litre petrol V8 engine that has a peak power rating of 298kW and an impressive maximum torque of 560Nm. This advanced petrol engine features both direct fuel injection and Variable Valve Event and Lift (VVEL) technologies which combine to maximise both power and efficiency. The QX80’s smooth seven-speed automatic transmission works in conjunction with its intelligent ALL-MODE 4×4 drive system to deliver impressive on-road driving dynamics and off-road capability.

For Australian customers, Infiniti has fitted a raft of innovative technologies to the QX80, including a state-of-the-art Hydraulic Body Motion Control (HBMC) suspension system that reduces body roll on high-speed corners and maximises suspension travel in tougher off-road driving conditions.

Safety-related technologies in the QX80 include Lane departure Warning (LDW) and Lane Departure Prevention (LDP) systems, Blind Spot Warning (BSW) and Blind Spot Intervention (BSI) facilities, Distance Control Assist (DCA) for the vehicle’s cruise control system and Infiniti’s intelligent Predictive Forward Collision Warning (PFCW) system, which monitors not only the car ahead to detect the potential for a rear-end collision but the next car ahead as well. Also included is Infiniti’s Back-up Collision Intervention feature, which can detect an object behind the vehicle when reversing and immediately brake the car to a stop if needed.

And in keeping with the QX80’s stature, an extensive catalogue of standard features is fitted, including 22-inch diameter sports wheels, an advanced 15-speaker BOSE Premium Audio System (includes two sub-woofer speakers), an entertainment system for second-row passengers and even heating for the leather-upholstered steering wheel.

Powerful and refined, the QX80 is also highly capable, with strong abilities to cover off-road terrain and a maximum towing capacity of 3,500 kilograms^.

The QX80 has been packaged to deliver exceptional comfort, convenience and value and will be priced at $110,900* (Manufacturer’s Suggest Retail Price, excludes on-road costs) when it arrives in Infiniti showrooms later this month.

Jean-Philippe Roux, the Managing Director of Infiniti Cars Australia, said the Infiniti QX80 is a commanding SUV that will meet a specific local market opportunity.

“The QX80 is among the most luxurious and generously appointed SUVs available in the world,” he said. “It is spacious, elegant and has an incredible presence, and its arrival in Australia will position Infiniti squarely in this important vehicle segment.”

According to Roux, adding the QX80 to Infiniti’s Australian catalogue is a logical move.

“A number of buyers have asked us for a model at least one size up from the QX70 crossover. Adding the QX80 to our local catalogue in small volumes will meet this local opportunity.”

The arrival of the QX80 in July will be the first in a series of new-model additions for Infiniti in Australia. From early next year, three all-new models are scheduled to be released: the Q30 active compact, the QX30 active crossover, and the production version of the evocative Q60 Concept 2+2 coupe, which made its world premiere at this year’s Detroit Motor Show in January.

“Expanding the Infiniti vehicle range is a key part of our plan for sustainable growth in Australia,” Roux said. “These next four new models to join our range will see the Infiniti brand cover a much broader range of the local premium market. And we have even more all-new models planned.”

Full specifications and equipment for the Australian specification Infiniti QX80 will be announced closer to its date of release in July.

* Manufacturer suggested retail prices (MSRP) are provided for media purposes only and do not include statutory charges or other on-road costs.

** Maximum recommended drive-away price for vehicle in Victoria including 12 months’ registration, 12 months’ CTP and applicable statutory charges, dealer delivery and administration charges. Price is based on a private owner aged 40 with a good driving record and the vehicle being garaged in Victoria. Prices may differ depending on State purchased, individual’s personal circumstances and will vary from dealer to dealer. Premium paint is available at additional cost.

^ Towing capacity is subject to towbar/towball capacity. The capacity may be reduced if a non-genuine Infiniti towbar is fitted.

The first generation Audi Q3 was launched 7 years ago and proved a successful model for the brand. They have just released the all new second generation model into what has become a very competitive segment of smaller SUVs. Rob Fraser went along to the launch. [Read More]

Mitsubishi Pajero Sport is not exactly pretty and is a marriage between Mitusbishi’s Triton, lagging buyer taste of family cars. [Read More]