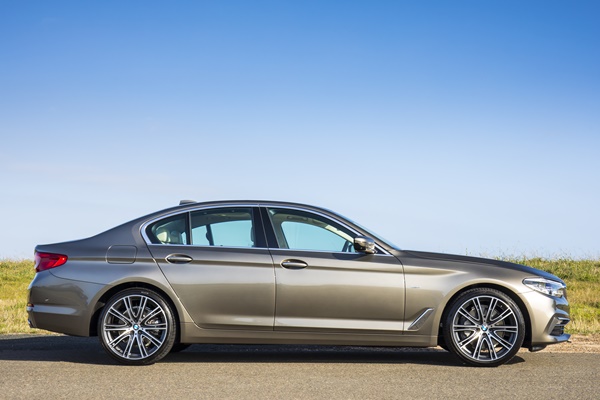 I’m fond a bit of comfort. Being spoilt makes you feel special, and the 530d Luxury Line has everything the 750Li uber-barge had, but is even more frugal. If I’m honest, the 7 Series was a handful at coles.

Outside:
The is a right-royal quality to the voluptuous body.
It looks expensive. The 5 Series isn’t handsome as such, but it is very imposing. As one old man said as I stopped at the lights, “that’s some fancy bucket of bolts you have there, matey”. Serves me right for driving through Surry Hills with the windows down.

The both ends are replete in sparkling LEDs. The tail lights look truly beautiful, especially at night, but the headlights mesmerizing all the time. The Angel Eyes daytime running have a look of the devil, but at night, the headlight array looks as if it is about to cut miscreants down with a L.A.S.E.R (said with fingers held Doctor Evil Style).

You can choose to activate the High Beam Assist with a button nestled on the end of the indicator stalk. The system will then switch between various modes so that the road remains well lit, but oncoming traffic isn’t dazzled. People pay big money for that kind of light show.

There are lashings of chrome adorning the body. The 7th generation 5 Series has smoothed off some of the sharp, and rather unnecessary contouring that dogged previous models.

Body coloured door handles have just a splash of chrome for interest. On the top rear surface, there are smart entry lock/unlock pads. BMW handles have raised lines to note where the locking touch pad is.

Unlocking is by grasping the handle. It works as long as the key is secreted about your person.
The low-profile run-flat tyres look like schmears of paint on the massive 20” rims. The effect of over-the-top bling can’t be overstated.

I like the look, but I’m not completely sure you’d pick one in traffic. Car parks are chockers with a certain sameness. Any slight misgivings evaporated once the door handle was given a gentle tug.

The cabin is utterly beguiling.  It drips with every conceivable luxury, from soft diamond patterned Nappa seats, with heating, cooling, and massage, to automatic scent control. 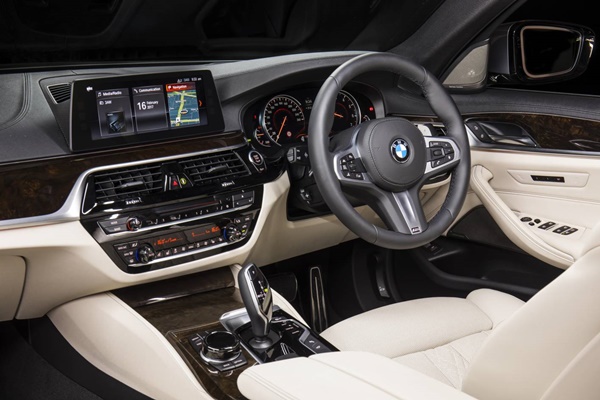 The iDrive control panel houses all the vitals you need to programme your life. Finally BMW relented and has given the centre LCD touch control. In many ways it is easier than fluffing about with a knob. This means you can input by twiddling the knob, writing on the knob, it touching the screen.

If you don’t want to touch anything, you could use Siri without touching controls. More about that later.
Our test car has a base price of $120 grand, but with an additional $21,000 of tasty options, fairly bristles with tech too numerous to name.

The Burled Walnut is topped off with smatterings of satin chrome and looks great.
BMW has ditched the god-awful indicators of the previous model.

The stalk used to return to the centre position once activated, but now stay in the direction of the turn, like most other cars. Much merriment ensued if you tried to cancel a lane change or corner. You’d usually end up putting the blinkers on the opposite side on, then the other side, then back again. It was daft.

Mini still does it, much to my chagrin.
The centre touch-tablet is super-wide with great resolution. It makes input easy, and the system comes with gesture control. Turning the volume up means whirling your finger around like a demented windmill. You soon abandon it, then it goes off by accident while you’re talking on the phone.
You can use voice input if you can be bothered, but it is much less infuriating if you use the steering wheel controls. 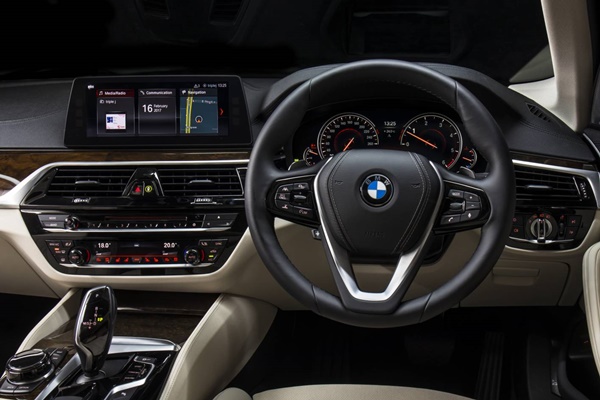 Finally, handsfree Siri is genuinely handsfree. No buttons need pressing. As long as the background noise isn’t too bad, say “hey Siri”, and the system comes to life with the familiar Apple “bong-bong”. I was able to perform an impressive range of voice functions with my hands never leaving the wheel.
I could navigate with Apple Maps, make and receive calls and texts, and play music. I asked Siri to find me the nearest food and fuel, and she got very chatty. I reckon she is getting a bit cheeky though.
On one occasion, she told me to do it myself, as if she was getting a bit narky. There is something very wrong about a car getting all flirty with you. Buttering me up won’t get her a better gong.

BMW has outdone itself by making the CarPlay wireless. Your battery runs down quick smart so my advice is to plug it in anyway. As a safety measure, you should always have plenty of charge on your mobile in case you get into trouble. 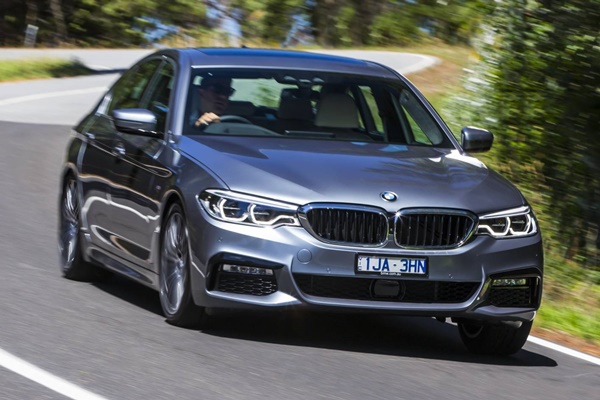 The Drive:
The new 5 Series is super posh. Some complain about the alleged loss of the sporting proclivities of old 5 Series. What a load of tosh If you want a sports car, buy a sports car.

I’d rather be pampered thanks very much. I can’t abide rock-hard springs, and unforgiving shockers. If your damping is going to change all by itself, why intentionally make it worse. Let the car do the work
In comfort mode, the ride is nothing short of sumptuous. There is driver-configurable ride control. The is not a world of difference between the various modes, but fear not, they’re all fabulously plush.

Handling is what I’d call, gentle. It wafts along in serene isolation. The occupants are coddled, and kept far away from anything as unspeakable as unruly tarmac. The cabin is ghostly quiet. Most of the time the only sound is the air coming from the vents. Should you care for a spot of Mahler, the deep, rich sound system makes it sound as if the orchestra was in the back seat.

The direct select buttons can switch between your favourite AM/FM/DAB stations. You can also store functions like SatNav Destination Input. You’d expect such things from the clever Germans.
Touching the power seat buttons brings the graphic up on the centre screen before you’ve actually started making the adjustment, so you’ll always know exactly what you’re doing.

The car fits like a fine kid glove. The steering isn’t quite as sharp as it used to be. Electric steering rarely is. But it means you can park the car by pressing a button. No hands or feet are required. There is a remote to use from outside the car if you really want to show off. 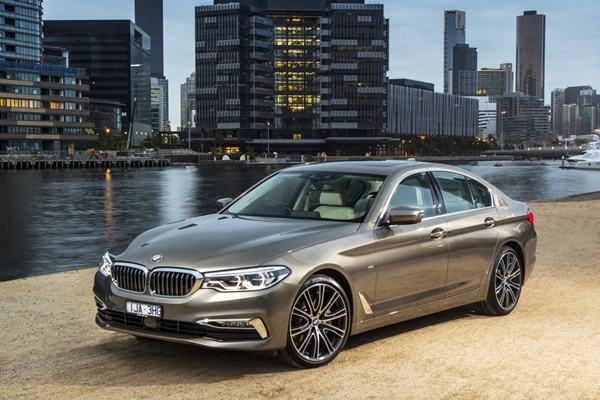 The suspension is making thousands of adjustments a second. It keeps the ride just-so, and adjusts the ride depending on load, so cornering is good despite the size. There is just a smidge of body roll to keep you on your toes, but the 530d goes like a laser-guide rocket.

Corners are dispatched with BMW’s usual alacrity. You can time it so you sling-shot through the apex, and out the other side. You can corner by feathering the accelerator in a way not usually possible in a diesel. There simply isn’t sufficient response. The 530d is different.

There is enough sportiness to make a driver of a certain age want to keep a pair of driving gloves onboard. That’s about all you’d be able to fit in the glove box come to think of it. 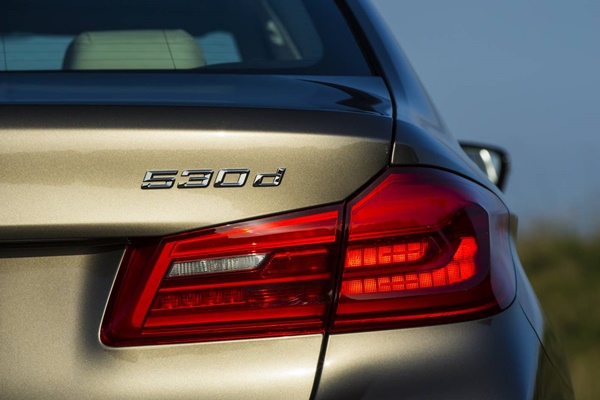 BMW says you’ll get a slightly unrealistic 4.7L/100. We managed only 7.8 combined. Testing is done by men in white coats with pocket protectors, and should be done away with. You want to know how much fuel it uses when you drive it on a road, not in a lab.

The engine response is quite startling. We ran our usual chores, and even tried the automated parking. It goes against everything a driver has ever been taught, but an owner will find the gadget invaluable. The fine tolerances means you only need 200mm clearance front and back.

The 390m degree camera is amazing. The screen will display the car as if taken from a drone hovering overhead. I had trouble seeing some of the smaller obstructions, and they’re the ones which do most of the damage. You can add flags so that when the system knows you’re getting near a danger area, the cameras come on.

No, I didn’t bend the Beemer.
Highway duty was where the big BMW was most at home. It was nothing short of magnificent.
There is a button on the steering wheel that turns the lane monitor on. It applies gentle force to the steering wheel to keep you centred in the lane. It also warns you if you still manage to stray. My only problem is the system needs lines to operate. The camera watches the road ahead carefully, but goes into standby if the conditions change.

If you weren’t paying attention, it might catch you by surprise. It’s worth remembering autonomous driving is just around the corner. Would a software upgrade change things on-board the 5 Series?
BMW says if you damage your car using these systems, is your fault not theirs. That seems a bit unfair doesn’t it?

The cruise control has a “traffic assist” mode. It deals with stopping and starting while the driver is otherwise occupied. The car will do whatever it can to keep you safe, but a driver always should remain aware of their surroundings.

The cabin really comes to life at night with discrete programmable lighting. We chose a soft blue and white to give the evening a nice glow. The speakers are lit from inside the grille. The driver’s LCD instruments look spectacular. All LCDs on board have excellent resolution.

Conclusion:
There is too much good stuff to go in to here. The car is crammed to the gunnels with tech, and no expense spared has been spared on luxury accoutrements. At $141,000-ish, our car was a full $200 grand less than BMWs grand poohbah, the 750Li. Yet, the 5 Series felt every bit as luxurious and fun on the road.

The Ambient air freshener got very annoying. Even after it was turned off, the residual scent made the cabin take on the feeling of an art deco public toilet when the climate was on. In the bin with it.
I love the 530d, I love it a lot. Of course, the 540i would be my pick, but the diesel fuel savings can’t be ignored. A road trip in the lap of luxury would get you from sydney to Melbourne, and part way back.
The boot is huge, and has a power operated lid. The doors have power soft-close, so no noise other than a softly whirring electric motor is heard after the engine turns off.

The experience begins the second you open the door, but even more interestingly, the exterior takes on a slightly rosier hew.

Cars have finally made a fitting return to the hyper-comfort of such names as Auburn, Duesenberg, and Hispano-Suiza, and I for one, am thrilled. 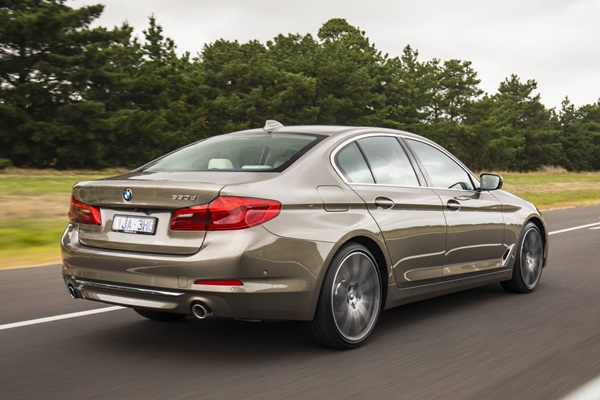 BMW has just launched the M5 Competition, which is the premium standalone sports model of the 5 series. [Read More]