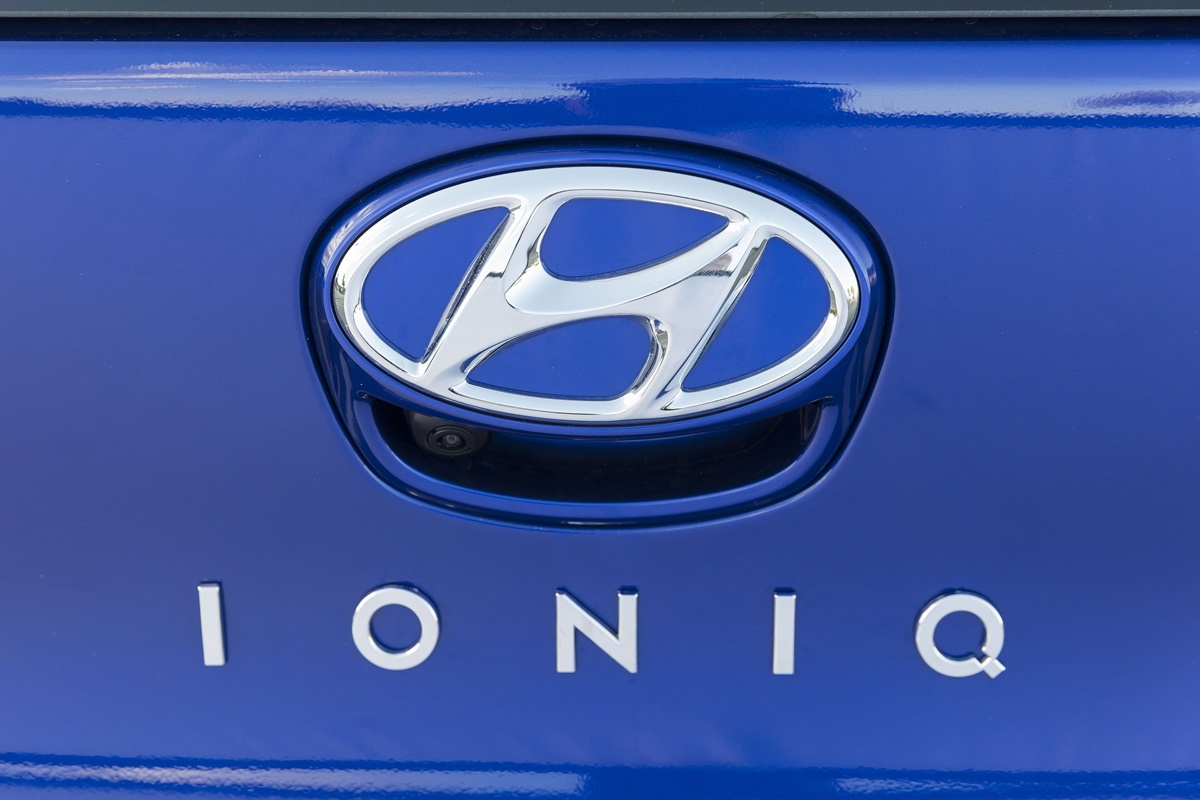 Hyundai has launched its first electric vehicle onto the Australian market, the Ioniq.

While you can also get it as a hybrid or a plug-in hybrid, Hyundai believes that the biggest sales, about 50% of the vehicles, will be the full electric models.

With two equipment levels for all power trains, the full electric Elite at $45,000 and the premium at $49,000 plus On Road costs, makes the Ioniq the lowest price electric vehicle on the market at the moment.

The Korean senior executives shudder at the thought of it being called “the cheapest”, because that evokes images of poor quality.  Even the expression value-for-money suggests a compromise in the features to keep the price down.

Nothing could be further from the truth.  The Ioniq comes with a wide range of features for comfort, safety and efficient driving. 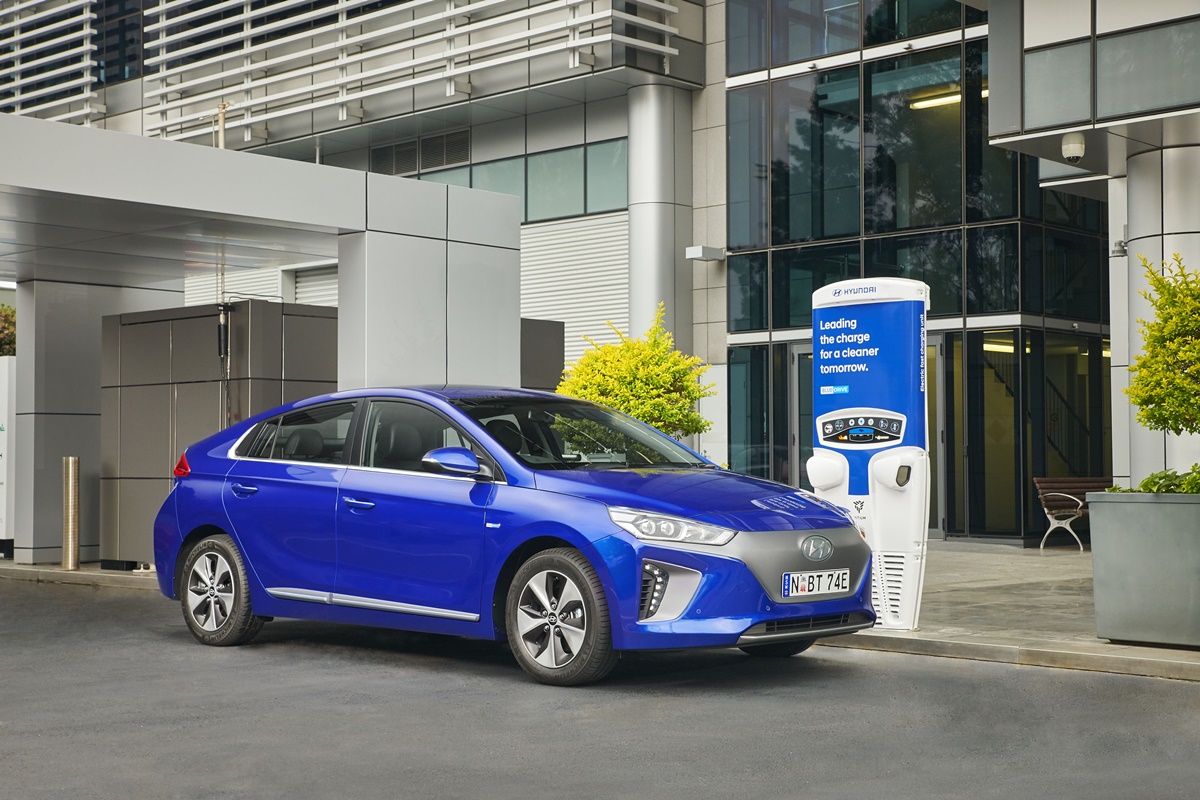 The exterior design is normal.  Not in the boring sense, but Hyundai has not gone out of its way to look radically different just because you can get this vehicle with drivetrains of the future. It does not try to stand out by being quirky in the way that the Prius did when it came onto the market.

The Ioniq is classified in the Small category in Australia.  The top five best selling cars in this class so far this year are the Toyota Corolla, Mazda3, Hyundai i30, Volkswagen Golf and Kia Cerato.  Hyundai also have the slightly smaller Elantra in this category.

The Ioniq, which is slightly shorter but a little wider and taller than the Elantra will be Hyundai’s third car in this category.

It is a stylish vehicle with a fastback look.  The main distinguishing feature of the electric version is the lack of a grille at the front and a simple “Electric” badge at the back. The rear has an additional window for better visibility, below the spoiler. 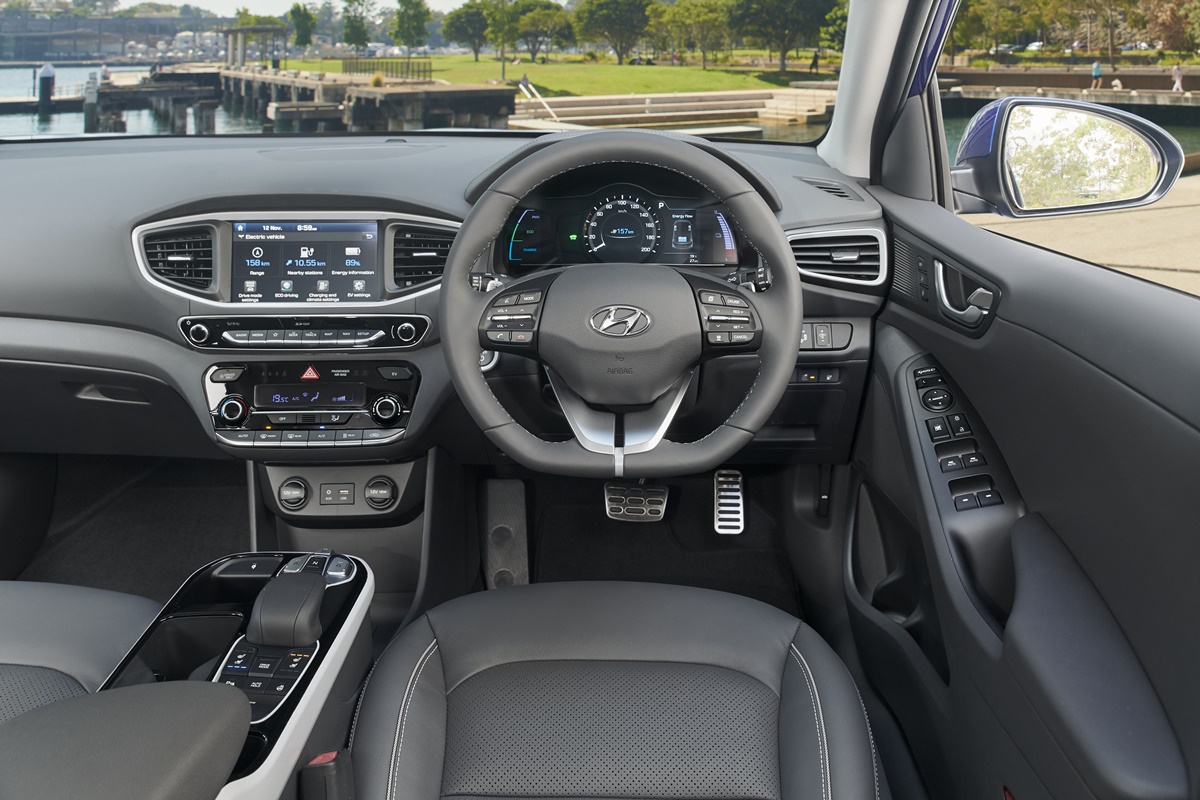 Stepping into the car gives the same impression as the outside.  It looks typical of the features and layout of a “normal” vehicle, the only difference is the gear selector which is four large buttons for drive, reverse, neutral and park.

The dashboard in front of the driver is dominated by one large circular speedo and a few other digital displays on either side such as the “energy flow”.  The centre area of the dash has an 8.0-inch multimedia screen. 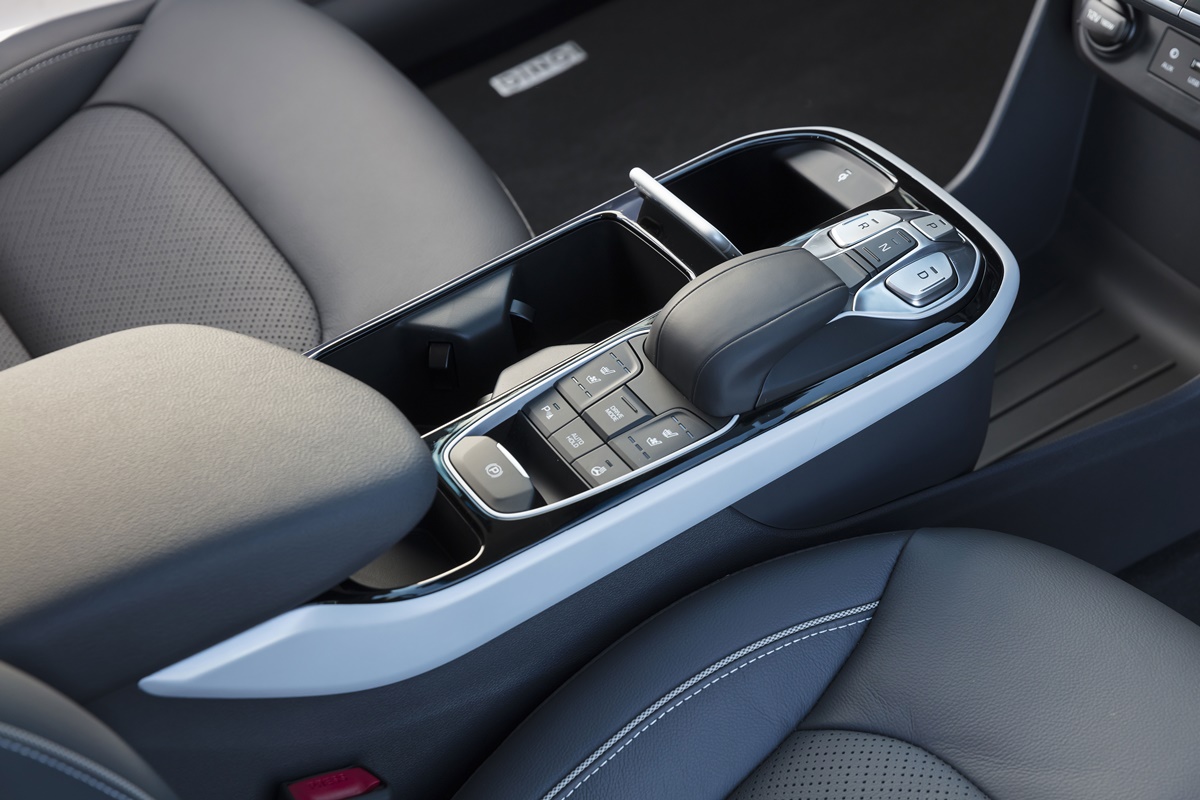 The overall look of the interior is neat and functional more than it is glossy and distinctive.

The interior space is good, including the rear seats which have more room than the newest Corolla. 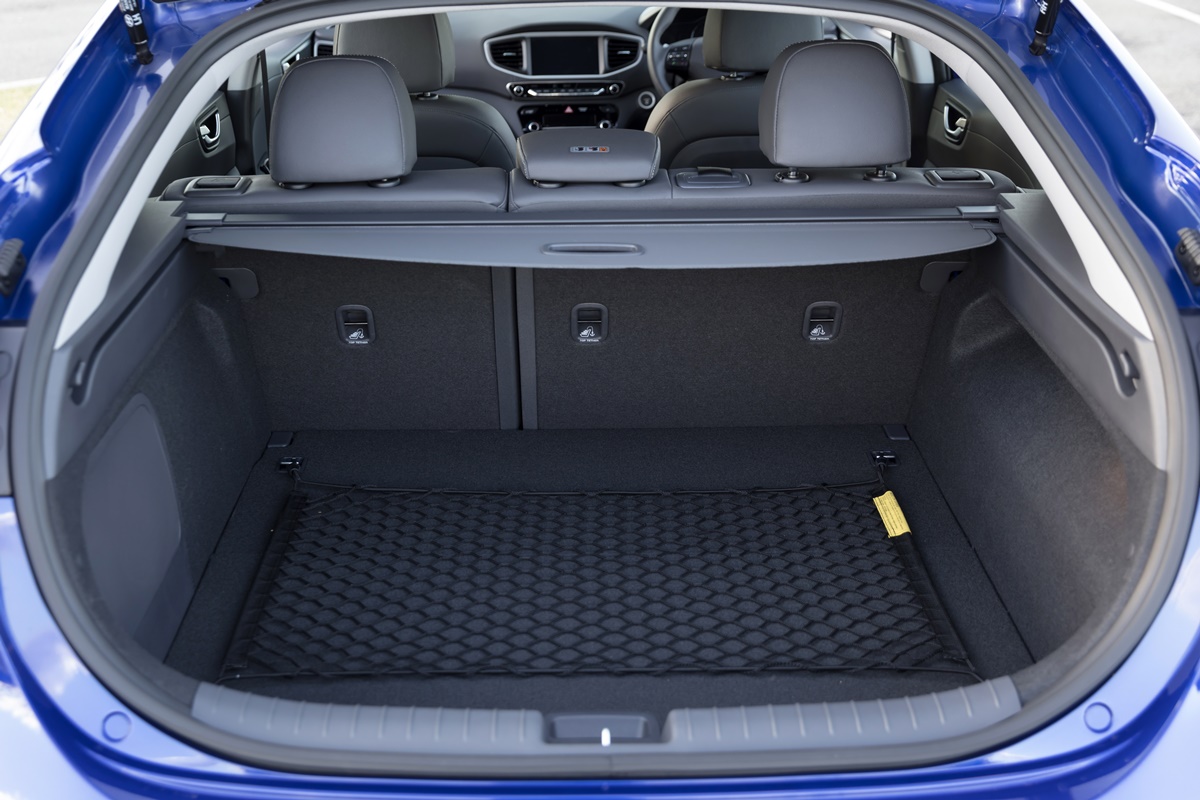 The cargo space in the rear is compromised a little by the batteries at 350 litres (below the security blind) but up to 455 litres if you stack things to the roof. 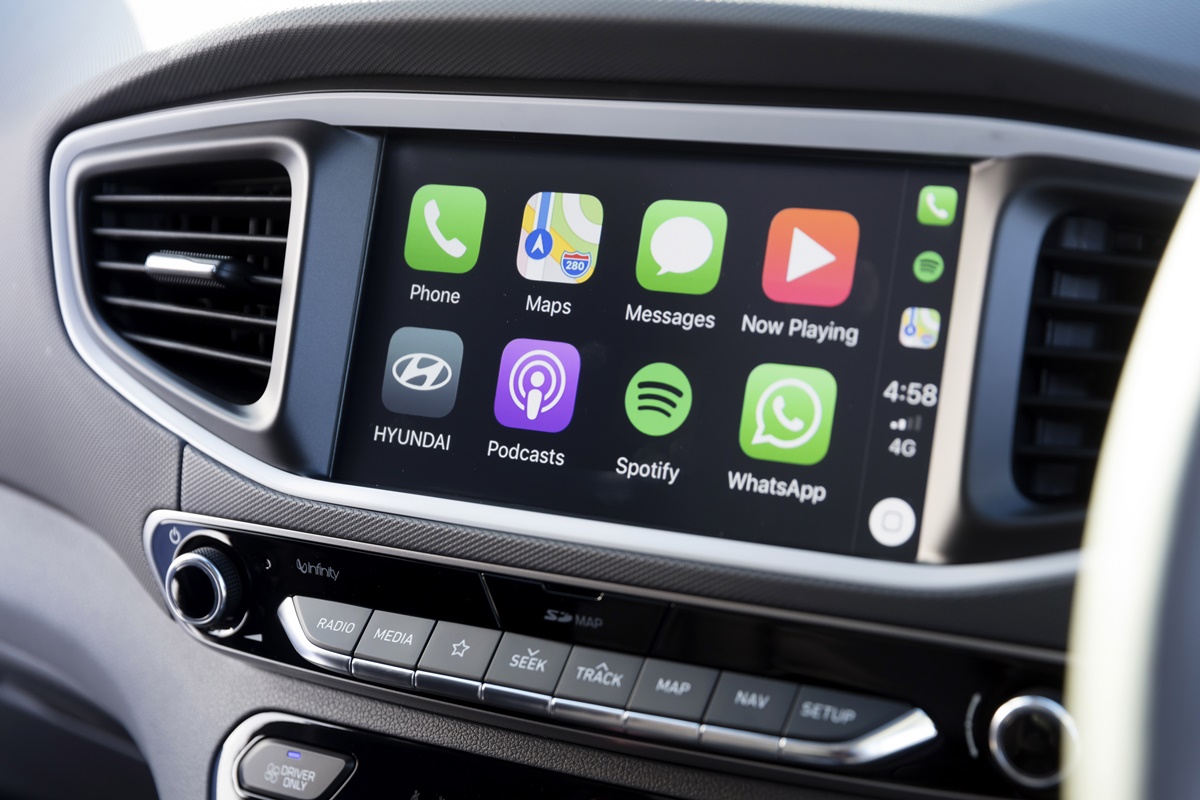 The Premium adds, among other things: a charging pad for your smart phone, heated and ventilated front seats and a sunroof

I particularly like this function that does not require you to be in the car to review your statistics. You can sit quietly at home and conduct a diagnosis using your phone.

You can also use your phone to “start” the car and get the air-conditioning going before you get in.

At the moment about 90% of vehicle charges are done overnight at home or during the day at a location of which you are spending considerable time such as work. The diagnostic function is part of the trend of people taking greater control of how and when they use their electricity: the ‘democratisation” of power use.  The interface technology in the Ioniq shows how this control can happen more easily. 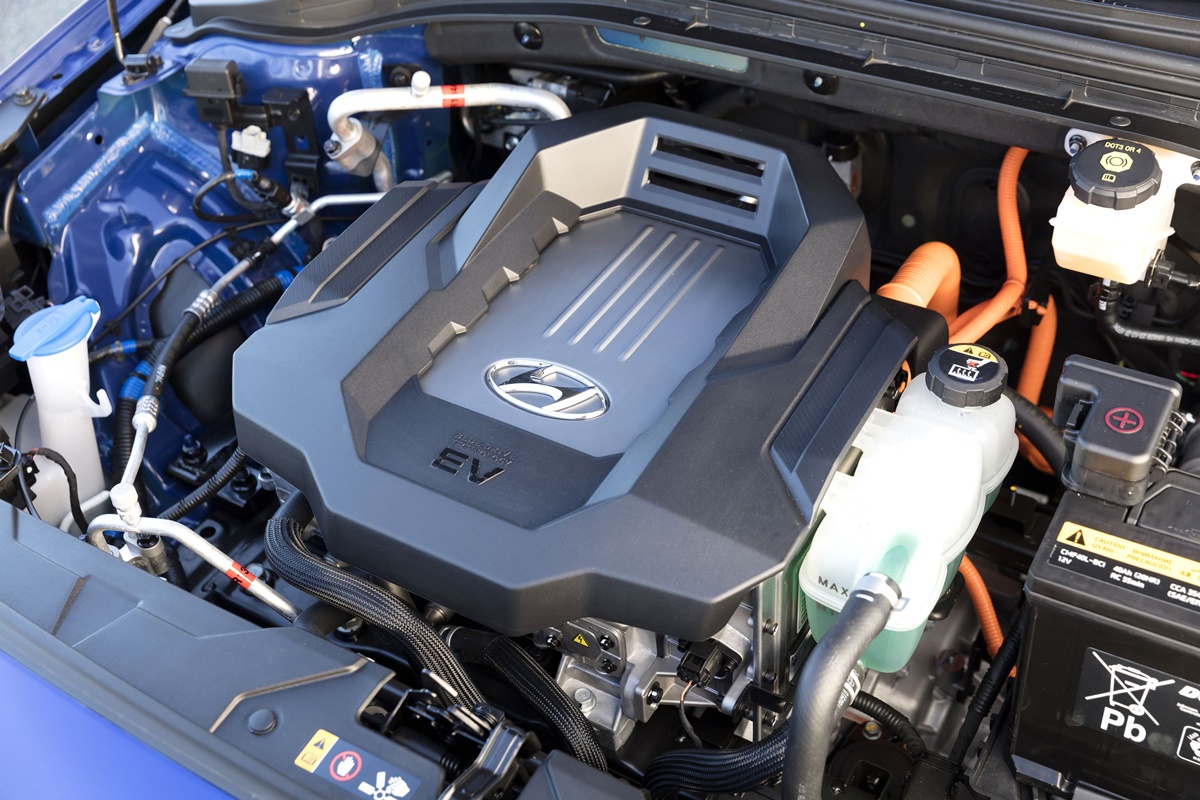 The electric motor is rated at 88 kW and 295 Nm of torque.  That’s a bit less horse power than the hybrids but heaps more torque.  The Electric car does not need multiple forward gears so only has a single-speed reduction gearbox.

A standard Drive Mode Select function allows a choice from Normal, Eco, and Sport modes. Eco mode smooths out throttle response and torque delivery to maximise efficiency, and motor torque is limited to 265Nm in both Eco and Normal. 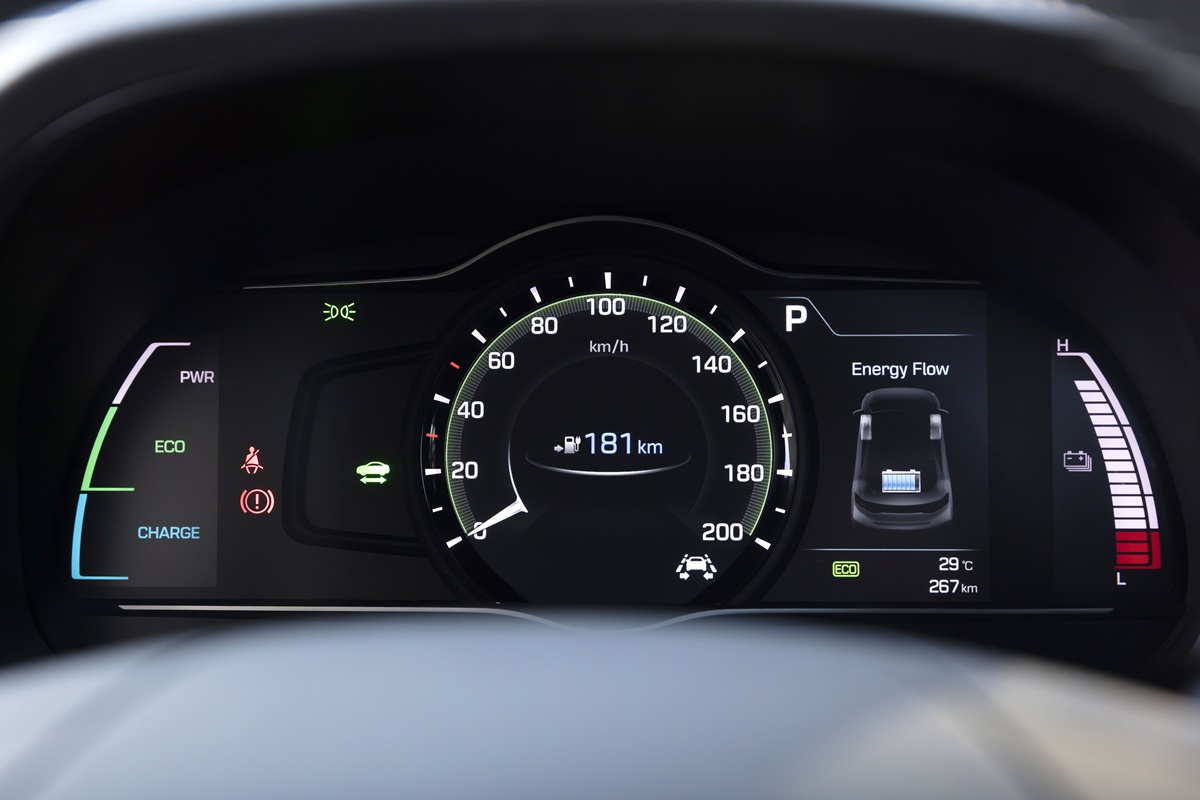 The big issue in the minds of many people with electric vehicles is the range and the time it takes to charge the vehicle. In both these areas improvements have been made. 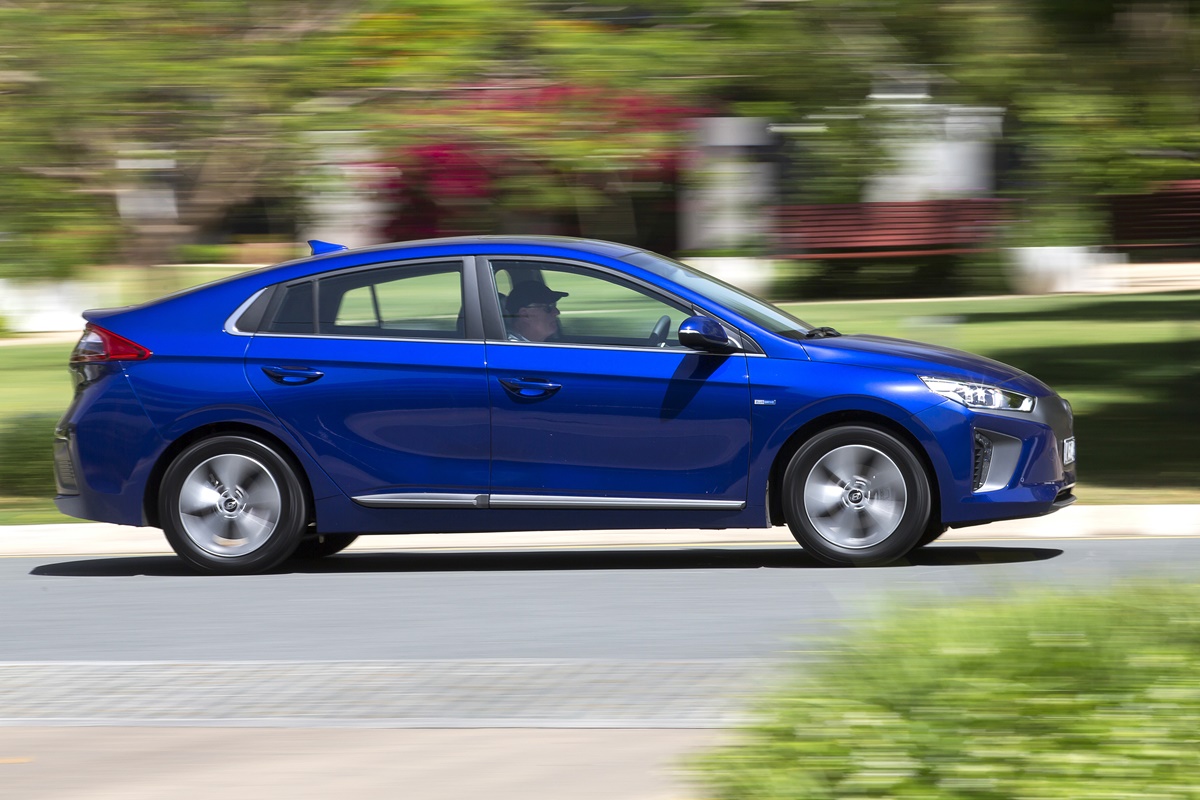 The Ioniq has a range of around 230 km based on a full charge of the batteries.  With a high-powered charging station, you can replenish 80% of the battery power in 23 minutes.  That’s about 180 km of travel depending on how you drive and the features you are using. This does not, however, make it a long-distance touring vehicle unless you are prepared to stop regularly and spend a bit more time than you would take to fill a petrol tank. 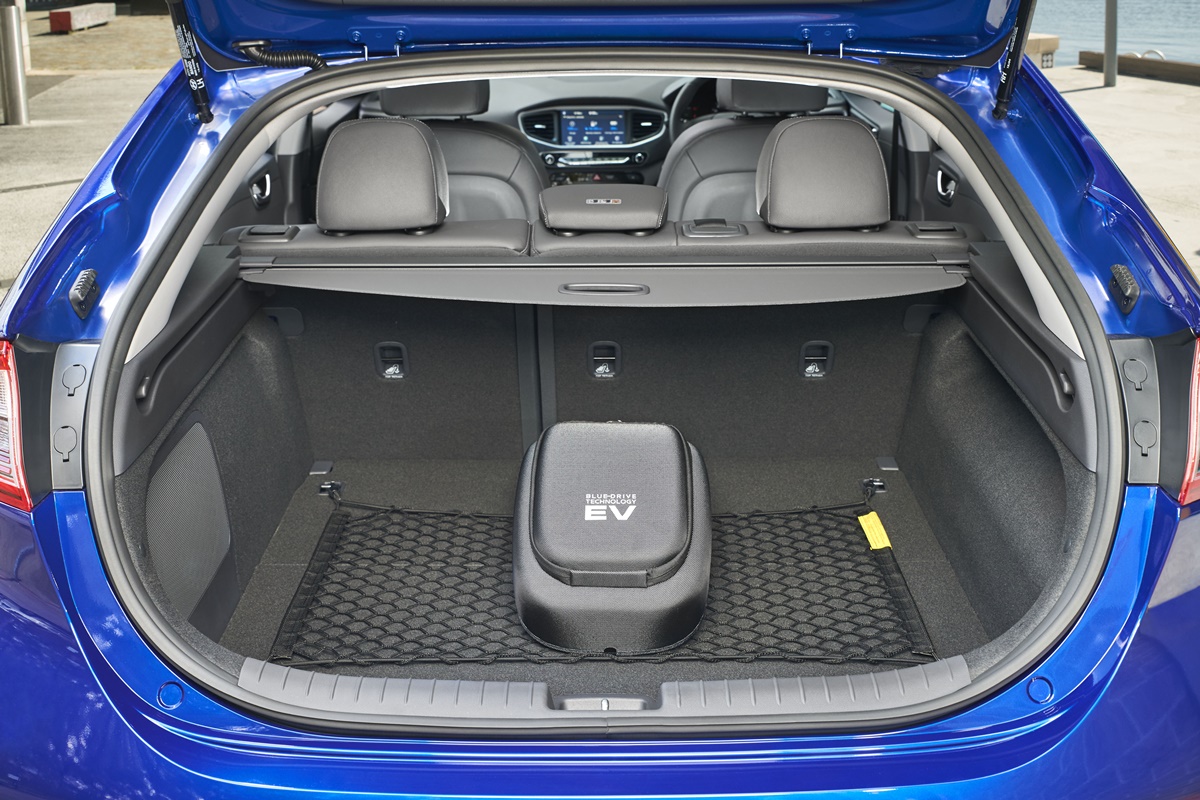 This technology is developing very quickly and there are systems that can deliver 350 km of charge in 10 minutes but at the moment the vehicles themselves are not capable of receiving this much energy at this rate.

Electric motors have less complexity than an internal combustion engine so the servicing is cheaper.  Regenerative braking also means you reduce the wear on your brake pads.  Hyundai offers a fixed price five-year service plan which will cost a total of $1,525 for a hybrid model but “only” $800 for the electric vehicle.  Some people believe that the service interval for electric vehicles could be increased thus reducing the costs even further. 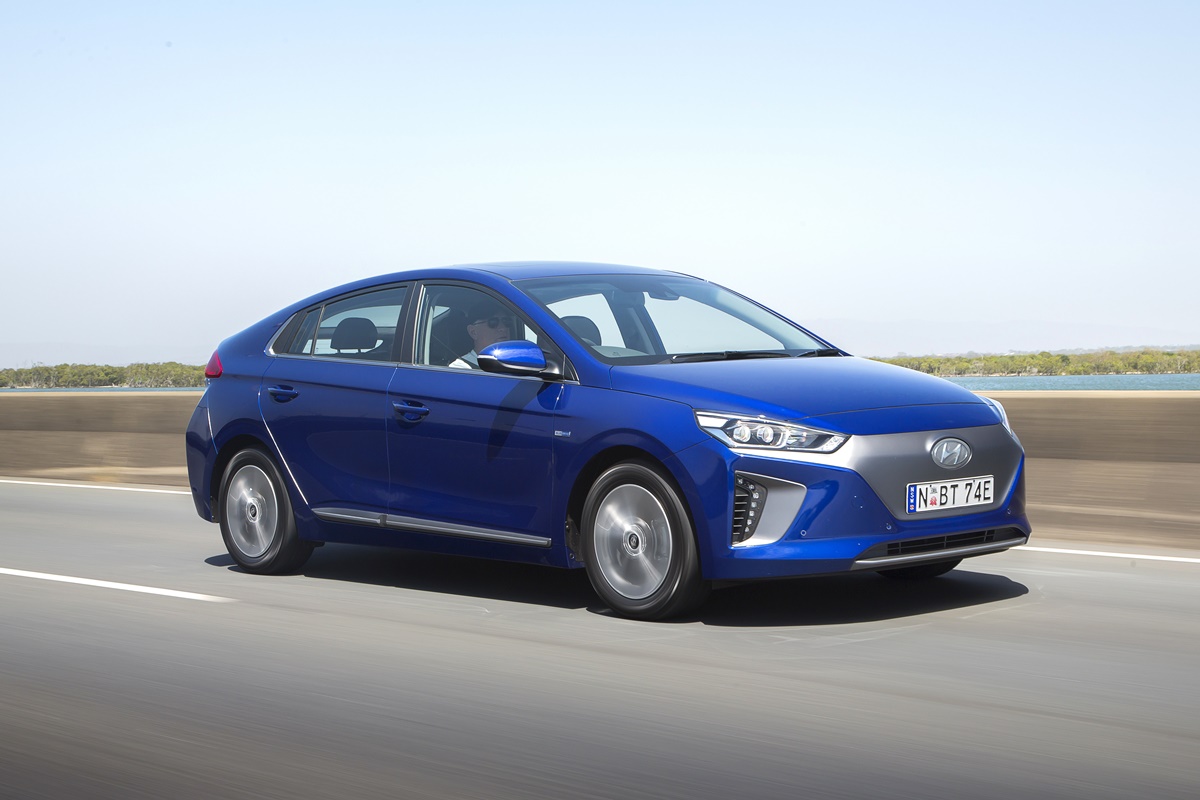 Hyundai’s SmartSense suite of features is standard in every Ioniq and includes: 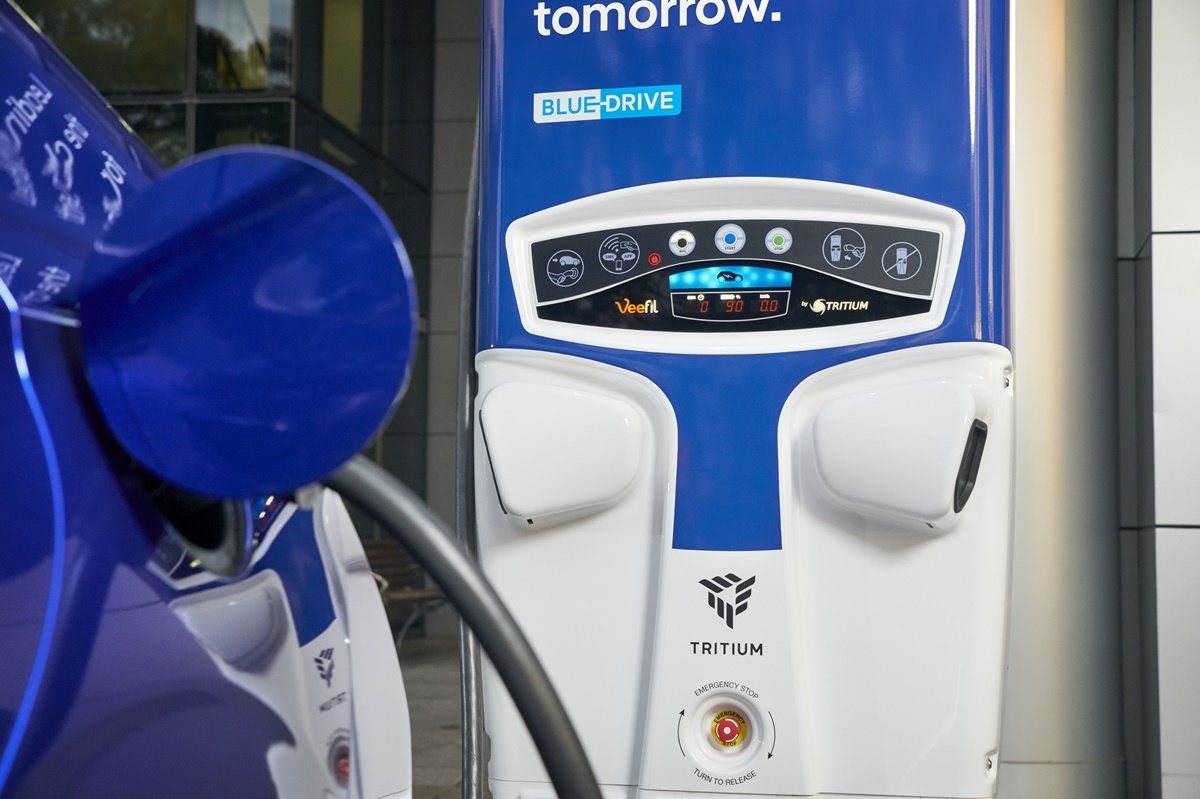 The Hyundai Ioniq demonstrates the development of electric vehicle technology by providing a car that is not hard to use, does not have quirky looks or features that suggest unusual motoring, the range is better than earlier examples of some electric cars as is the speed of recharging and it is steadily moving to more affordable prices. Price: Elite $44,990 – Premium $48,990 plus on-road costs.

Electric vehicles represent technology that will continue to develop and will create considerable opportunities for jobs and growth with the development of new technologies.

There is an enormous amount of frustration in many areas of industry that the concept of electric vehicles is often debated as though it were an issue between the left and right fractions of politics. Nothing could be further from the truth. Even if you don’t believe in global warming, electric vehicles reduce local pollution.  Many other countries are restricting the use of internal combustion engines especially in densely populated urban areas.

Australia is well behind getting on the bandwagon of this new technology and we need to make some quick non-political decisions to back up our expertise which in many cases has been shown to be well accepted overseas but slow to get any support in our own country. 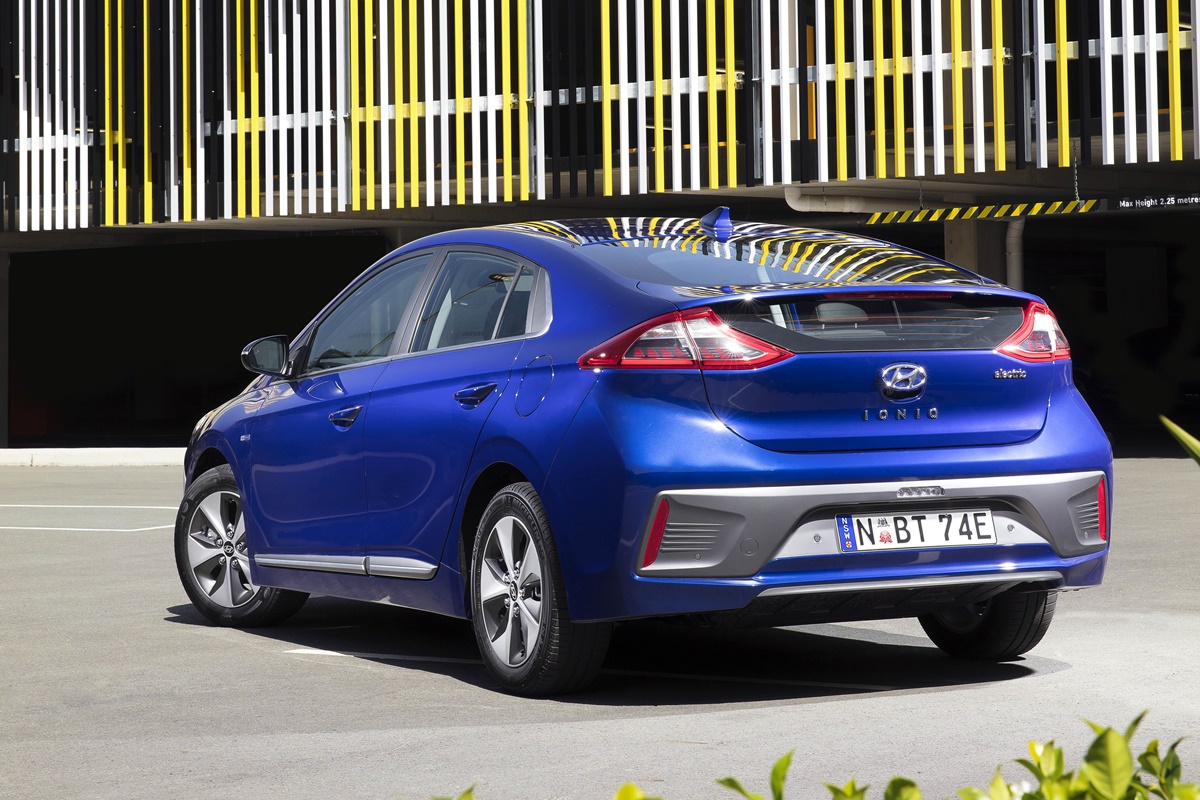 The Not So Good

Hyundai has launched its first electric vehicle onto the Australian market, the Ioniq.

While you can also get it as a hybrid or a plug-in hybrid, Hyundai believes that the biggest sales, about 50% of the vehicles, will be the full electric models.

Hello and welcome to Overdrive a program with an infatuation about trains, planes and automobiles. I’m David Brown [Read More]