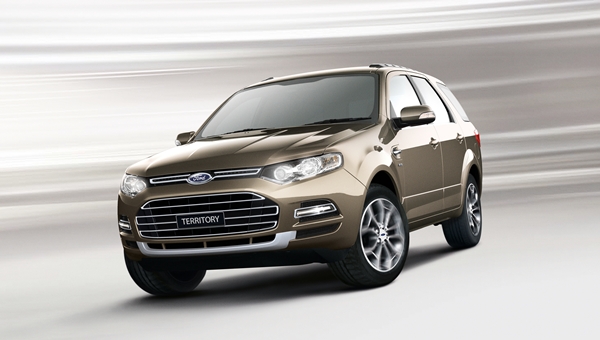 Visitors to the Ford stand at the Australian International Motor Show will be able to check out the new SZ Territory for the first time at an international motor show.

Boasting stunning new exterior and interior designs, new drivetrains and technologies as well as exceptional fuel economy, handling, refinement and safety, the TX and TS SZ Territory will be joined by the range-topping Territory Titanium.

When the Ford Territory first went on sale in April 2004 it redefined the mid-size SUV segment. Since its showroom arrival it has proved a popular choice for families and customers seeking a vehicle more adaptable to their lifestyle.

It proved so popular with customers and enthusiasts alike, it achieved the pinnacle of motoring success by taking out the coveted Wheels magazine Car of the Year award in 2004.

Since then, the Territory carpark has grown to more than 107,000 strong. In fact, its first nine months on sale saw more than 15,000 SUV buyers make Territory their first choice. Its peak sales year was 2005 when 23,454 were sold.

Despite Australia’s ever-expanding SUV segment and the ongoing arrival of new competitors, last year Territory sales were up more than six per cent compared to 2009*. 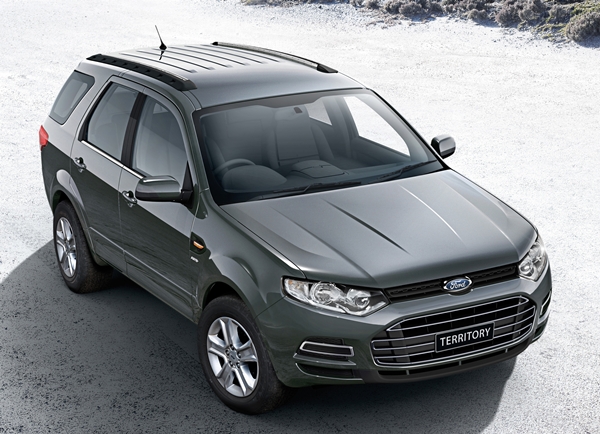 The TX comes fitted with an extensively updated 4.0-litre in-line six-cylinder petrol engine as standard. This revised power plant now offers a maximum power rating of 195kW, an increase of 5kW compared to the previous model. Peak torque increases by 8Nm and is now 391Nm. Fuel consumption falls to 10.6l/100km3, down a full 1.0-l/100km compared to the outgoing Territory. As a result, CO2 exhaust output falls 27g/km to 249g/km.

Partnering this proven I6 engine is the smooth-shifting ZF six-speed automatic transmission. All models fitted with the petrol six-cylinder engine are only available in rear-wheel drive.

All models in the new Territory range come fitted with Dynamic Stability Control (DSC) as standard equipment, which now features Roll-Over Mitigation (ROM). This new function helps to prevent a roll-over accident under certain conditions. The new Territory also comes fitted with Emergency Brake Assist (EBA), driver and front passenger airbags, side curtain airbags (for the front and second row only) and, in a Territory-first, a driver’s knee airbag. 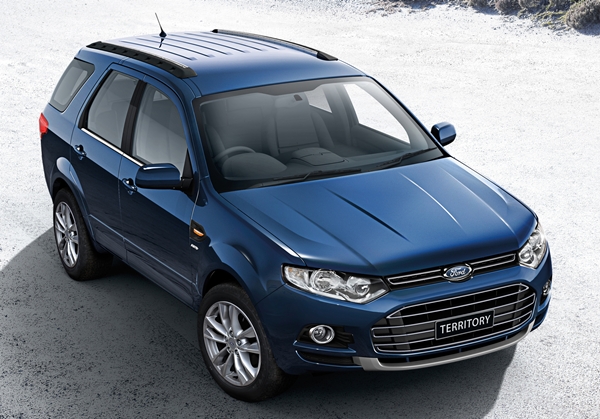 TS
The mid-series Territory TS gains additional equipment on top of the comprehensive equipment package fitted to the TX. These items include: machined-face 18-inch alloy wheels; reverse camera; front fog lamps; a unique TS front bumper; and a front grille painted in satin silver. The TS is fitted with a premium Interior Command Centre which features a premium seven-speaker audio system with a 150-Watt amplifier and subwoofer along with – in a Territory first – an eight-inch colour touch screen. This new touch screen is stylish and intuitive to operate and allows both front-seat occupants to control a variety of audio, communication and vehicle settings by simply touching the appropriate on-screen symbol.

The TS offers customers a variety of entertainment options. Integrated iPod7 functionality means customers can operate their iPod7 or iPhone using the steering wheel, the ICC’s buttons or the new touch screen. An in-built USB port and 3.5-millimetre auxiliary audio jack adds to the range of audio devices that can be operated in the new Territory TS. Bluetooth®5 integration also means both mobile telephones and other devices can be connected to the audio system in the Territory TS. 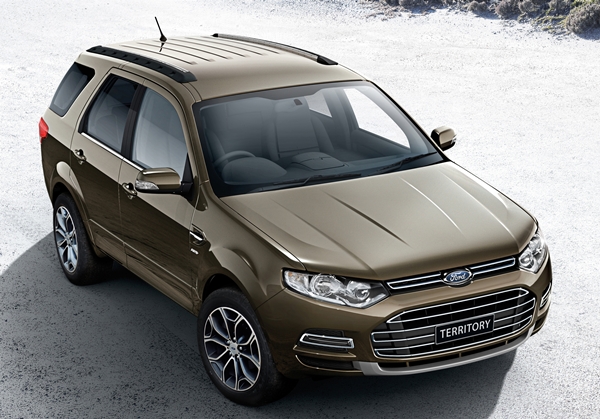 AIMS 2011 is all about envirocars and Better Place is an example. Better Place, GE and Renault Australia today joined together at the Australian International Motor Show (AIMS) [Read More]

We take a look at the 2011 Australian International Motor Show in Melbourne. The theme was electric… with many new models, sustainable energy and electric cars taking centre stage. AIMS 2011 [Read More]